Fridays at 12:30 pm EST on Crunchyroll

Yoshikage Kira just wants a quiet life, but these weird kids keep getting in his way…

How late is this post? Who knows! Perhaps it was the work… of an enemy Stand! Also, seeing as how the anime staff chose to sort of knit these two arcs together, I will be doing the same.

We’ve seen snippets of Kira here and there (even in the first episode of Duwang!) but this is our proper introduction to Part 4’s Big Bad. He’s a far cry from the likes of DIO, and in many ways all the creepier for it. As the show often reminds us, Yoshikage Kira just wants a quiet life… it just so happens that his ideal quiet life involves stalking and murdering young women. It is genuinely horrifying and revolting to see him softly cooing to a severed, rotting hand, licking it clean, treating it like a girlfriend. DIO was a bombastic megalomaniac, but Kira is deranged in a way much closer to home, making him much more fitting for Part 4’s smaller stakes. His scrambling attempts to reclaim the hand from Shigechi would probably be funny if the circumstances weren’t so damned creepy… and if it didn’t end with Shigechi’s tragic, untimely death. We hardly knew ye.

Kira’s Stand, Killer Queen, is one of my personal favorites, and is definitely scary enough to be a big villainous Stand. Comparisons to ZA WARUDO are unfortunately inevitable, but while Killer Queen isn’t as overwhelmingly powerful as The World, it makes up for it in being seemingly relentless. There’s no real way to defend against its deadly bombs, and even Star Platinum can’t damage the ever-tenacious Sheer Heart Attack. This far into the series, Stand battles are all about the characters using their bag of tricks to defeat the enemy’s bag of tricks, and Killer Queen’s multiple, powerful abilities are a way to make that more interesting. Our heroes scrambling to find different ways to create heat is a wonderful, silly set piece. 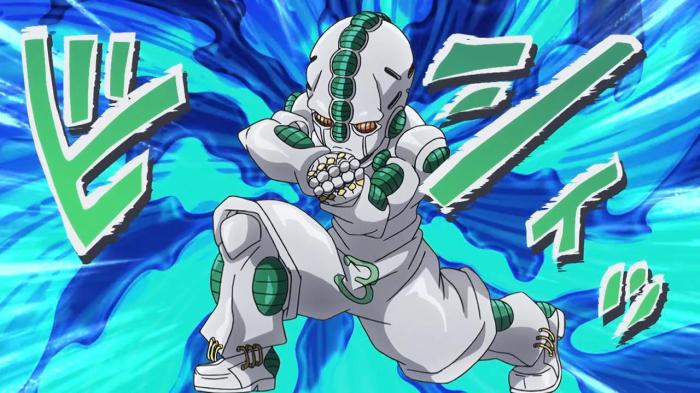 Speaking of new tricks, Koichi’s Echoes evolves to its final form – ACT 3 – to combat Kira. In lieu of cool, creative, sound-based powers, ACT 3 can… make things heavy. It’s a bit disappointing to switch to something that’s so mundane in comparison, but we’ll get plenty of use out of 3 Freeze in the future, even if the anime staff cuts out ACT 3’s goofy gratuitous (English-language!) swearing. Honestly, the entire moment is exciting not because of Echoes, but because of Koichi doing his trademark flip from timid to badass. I love it every time it happens, and getting the drop on Sheer Heart Attack is probably the single best time it does happen in Part 4. Even when he’s getting completely wrecked by Kira, we feel like Koichi is winning.

Of course, we can’t have the Big Bad lose so early on, and Kira’s escape via changed identity is my favorite twist in Diamond is Unbreakable. It’s a great way to “defeat” him for this week’s excitement, while still creating stakes for the last third of the show by giving the heroes a goal to work towards. I mentioned that the anime staff shuffled around a couple of the fights, and they did so purely to foreshadow this more effectively. In the manga, Yukako’s adventures with Cinderella came directly before Sheer Heart Attack, making it more substantially more obvious that Cinderella might come into play. The new order ramps up the tension further by immediately chasing down Kira after Shigechi’s death, and gives the twist more impact. After 100 episodes of this show, it’s nice to see that David Production still knows what they’re doing.