Iro’s verdict: What A Beautiful Duwang

This sure is Part 4, and so far I couldn’t be happier. I spent a good chunk of this premiere giggling in anticipation of what was coming next and recognizing early cameos put in by the anime crew. Despite the more tired high-school-kids cast, Part 4 is probably my favorite, since this is when the truly ridiculous and off-the-wall Stand powers start to enter the story. To put it another way, David Production has been doing a great job adapting JoJo for the past four years, and there’s no reason for them to suddenly fuck it up now.

Marlin’s verdict: Get A Feeling So Complicated

Well, not really, but I feel obliged to make a Duwang joke. Jojo is back, and it feels like we never left. Things escalate much the same as Part 3, with our much wiser character from the last arc coming to warn the new Jojo of the upcoming danger in his life. Josuke has already endeared himself to me with his… unique… personality. It’s certainly a foil for Jotaro’s stoic no-nonsense style, and I like how the two interacted and gave Josuke a basic introduction into stands without feeling like we’re just going through the paces. I do say that I find Araki’s brand of totally reprehensible villains is starting to wear on me a little bit. The idea of another serial rapist just seems so unnecessarily gritty for this piece of camp, but to fully learn the extent of Crazy Diamond’s weird powers I’m sure this first villain will simply be a stepping stone to showing off Josuke’s unique style.

One of the things I appreciate about JoJo is the way it seems able to reinvent itself for each part while still staying basically the same underneath. Diamond is Unbreakable feels a lot more weird and knowingly quirky than the macho camp of Stardust Crusaders, and the small-town Japan setting is a welcome contrast to that show’s globe-hopping antics. There’s perhaps a little too much exposition rammed into this first episode but that’s balanced out by some decent action and nice character bits, particularly from the perpetually flustered Josuke, whose chemistry with his polar opposite Jotaro seems to have this story on a good footing from the start. It feels like a fresh start, which is exactly what we needed, and I’m very intrigued to see where this adventure will go. 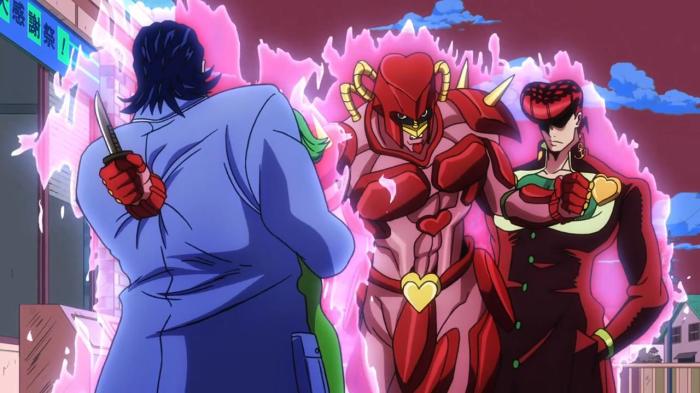 Gee’s verdict: Your Feeling I Can Feel Deeply

Ever since struggling through the less than stellar scans for Diamond is Unbreakable a couple years ago, it cemented itself as my favorite JoJo part, even moreso than the beautiful campfest that was Battle Tendency. Josuke is a great change of pace from the unflappable Jotaro, and honestly in the running for my favorite JoJo protagonist as well. The great thing about Part 4 is that this is when Araki really started getting into the swing of writing Stands as the incomprehensible oddball powers we know them as today. Overall, there isn’t much more to say, David Production has done a fine job of adapting three parts of JoJo already, I fully expect Diamond is Unbreakable to be just as competent.