Fridays at 12:30 pm EST on Crunchyroll

With Kira having vanished into anonymity, the gang raid his old address hoping to find any clue that can point them towards his current whereabouts.

Surprise! Iro is away this week (probably battling enemy Stands) so I’m steeping in to run this madhouse for a week. While i don’t posses his encyclopedic knowledge of the manga, I can name many 70s and 80s rock bands, so I think I’ll do OK.

This week’s episode is something of a cooldown after the dramatic confrontation with Kira and his subsequent escape. That’s not really a bad thing though, because we’ve already established that much of the charm of Diamond is Unbreakable comes from its quirky, small town atmosphere and we do get more of that here, albeit in an interesting new way.

Of the two plot threads that get juggled, it’s probably the gang’s investigation into the former Kira household that’s the weaker, since it’s largely a by-the-numbers enemy stand of the week battle. That’s not to say it’s without value though, as there’s a ton of neat and funny little details that get pulled out about Kira (he deliberately finishes third in all competitions he enters!), and it’s a chance to add a little background to a character who’s consisted largely of one dimension up til now. The fight itself is fun, though being trapped in a photograph is actually a pretty mundane idea compared to some of the insane powers JoJo has pulled out up to now. I do like Jotaro’s clever method of trapping the elder Kira, and it’s almost enough to make up for Okuyasu’s agonizing stupidity in letting him go. 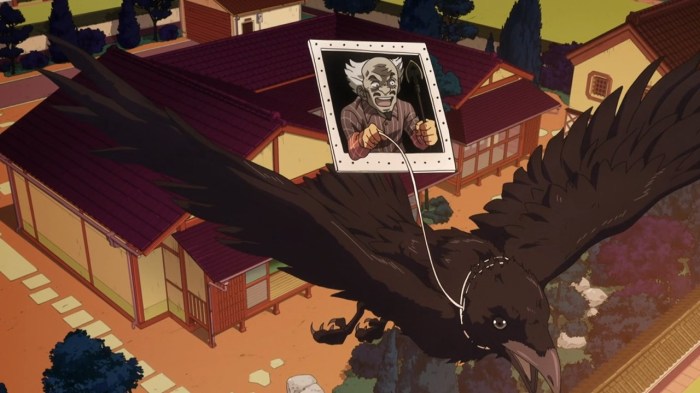 What’s far more interesting to me though is the sub-plot which involves the newly disguised Kira coming home to assume the life of the man who’s identity he stole. JoJo is great at many things, but up until now conveying the crushing ordinariness of suburban life hasn’t been one of them. Yet contrasting Shinobu Kawajiri’s mundane hand-to-mouth existence, boring life, and apathetic son, with the frisson and sense of danger that the newly reincarnated Kira brings is a great way to throw the new version of the character into sharp relief. It’s even better for the audience of course because we know underneath that attractively dangerous facade lies a true psychopath. It’s just a matter of when he breaks out and decides his new family are surplus to requirements. Until then it seems like the Bizarre Adventure will come down to earth just a touch, and that’s no bad thing.