In a fictional country comprised of 13 states, the autonomous organization ACCA provides public service and polices the rest of the government. On the eve of ACCA being dissolved, Jean Otus’ new assignment is to audit all 13 districts within six months.

This is a weird one. In theory, I’m way into a story about government internal affairs officers. Bureaucracy can be weirdly engaging when done well. It’s just… well, I’m not sure where ACCA is headed, and I’m also not sure whether that’s a good thing or a bad one. The anime staff (including director Shingo Natsume) brings heaps of panache to the table, but that doesn’t change that we’re watching a guy in a uniform smoke cigarettes and talk to people for 24 minutes, and not always in the best-written manner. Add in the world’s bizarre toothlessness (cigarettes are considered ritzy and prime candidates for the black market), and I’m just not sure what to think. Still, it’s something to be said that I’m compelled to watch more. I’ll keep an eye on this one.

Artemis’ verdict: Something To Keep An Eye On

If I were a betting girl, I’d put money on ACCA easily become one of the most popular titles this season. Not just for lack of competition, either – this show has a ton of atmosphere and practically oozes visual style and panache. While the story looks like it might be going for a deliberately slow reveal, it also seems like it could hold some interesting cards up its sleeve, and I don’t dislike the main character’s infinitely cool-headed yet studiously casual persona either.

On the other hand, I think the writing could certainly be better. Exposition in the form of a character delivering the ubiquitous “as well know” speech to his colleagues never exactly thrills me; I know it’s supposed to make things in an alternate-universe setting clearer, but personally I always start tuning out whenever this happens almost from instinct, and only end up bored yet still hazy on the details. If an anime really feels the urge to let its audience to know what the geographical/political/whatever situation is right off the bat, I’d prefer some brand of upfront narrator introduction, which might be uninspired but at least isn’t anywhere near as awkward or clumsy as what we got here (plus, you know, points for honesty). Of course, this type of thing might very well be just a teething issue, but this is a first impressions post – I can only go by what the first episode delivers. 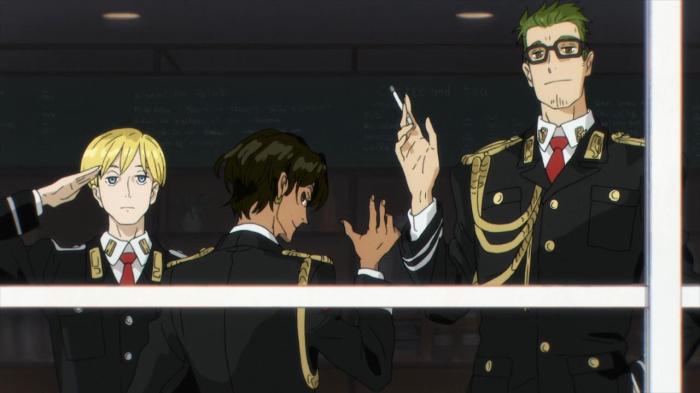 Bottom line, I’m not yet confident that ACCA won’t just be great example of style over substance, but I also liked what I saw enough to go back for more. At the very least, count me in for another couple of episodes.