It’s Edo-Period Japan, and a group of military police tasked with arresting thieves and arsonists is led by the charismatic but ruthless Hasegawa “Onihei” Heizou. Fugitive Kumehachi is captured and asked by Heizou to turn spy, using his knowledge as an ex-thief to help the group bring other criminals to justice.

I went into this show knowing basically nothing about it. I’m not at all familiar with the novel on which this anime is based and if I’m not mistaken, Onihei is the only anime produced by M2 to date, so I really had no expectations either way – not a bad way to start off a show, actually.

To be honest, having now watched the first episode I’m still not quite sure what to think of Onihei. It seems to have potential, but for what specifically I’m not totally sure. Is this going to be an emotional period drama with one or two gory scenes, a bloody action piece with the drama sprinkled in, or something else entirely? Either way I don’t mind the setting; there are Edo Period shows a plenty out there but it’s been a while since I’ve seen one I thoroughly enjoyed, and I like a decent chanbara story as much as the next viewer. The main characters populating this setting are the bigger question mark, because I have no idea who I’m supposed to be rooting for, if anyone. Heizou seems to be a man of true strength as opposed to a stereotypically idiotic, cowardly, or corrupt police head, but I guess he’s still into blatant torture when it suits him. Kumehachi, meanwhile, is a thief with equally strong principles who was nonetheless thrown out of his old gang for attempted rape and is probably about to become a spy. So… go, team?

On the technical side of things, the art style seems almost purposefully ugly at times, even slightly retro – there’s no interest in making the characters out to be Edo-style bishounen, that’s for sure. The eyes are smaller and narrower, the faces leaner, the colours muted. Weirdly enough, the character designs feel at once more basic and more realistic than usual, because while there’s a lack of the usual stylized prettiness (for lack of a better word), that doesn’t mean they lack expression. The animation is fairly low quality, meaning that the major scenes mostly gain their impetus via liberal amounts of blood and/or plenty of oomph from the voice actors, but I was enjoying the hell out of the OP on both a visual and aural level – a stylish, jazz-fused take on traditional jidaigeki fare. In fact, that ED sure isn’t bad either.

I don’t know that I’ll love it, but I’ll certainly be sticking with Onihei unless it gives me a solid reason not to. It’s wildly different from anything else airing this season and as we’re all keenly aware, even halfway decent titles are precariously thin on the ground right now. 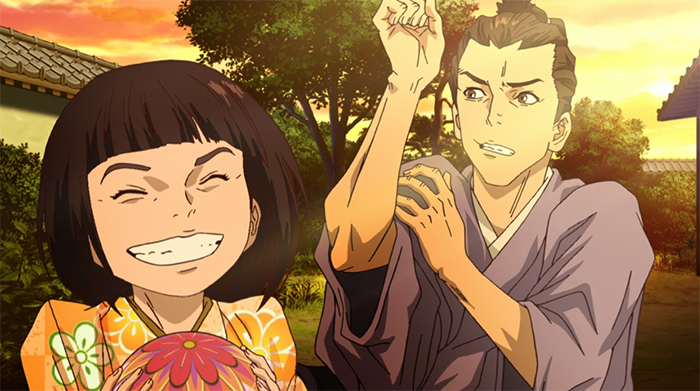 Usually I’m not a fan of extreme violence or crime dramas in general, but after the onslaught of “cute girls doing cute things” shows I’ve been wading through this season, Onihei felt like a cold, refreshing glass of water for my soul. That doesn’t mean I’m giving a pass to the unnecessarily graphic torture in the beginning of the episode or the attempted rape that comes up from time to time. Those kinds of things are the laziest shorthand for making your story “dark” and “mature” and I’d say we tread dangerously close to that line a couple times here.

What I did enjoy are the other positive and legitimately mature things going on that make up for those weaknesses. Our main character is a real adult man, with a wife, children, and an extremely difficult job. His intentions are good, but it’s kind of hard to ignore all that torture he seems OK with. That alone sets us up for the types of adult stories that we rarely see in anime these days. Add in the potential for different “mystery of the week” crimes to solve with their own emotional weight and I think this could turn out pretty good. So long as it doesn’t succumb to using violence and sex as easy outs, which is still entirely possible, I’m on board for watching more.

On a different note, Onihei is one of the exclusive shows launching with Amazon’s new “Anime Strike” channel that just went live yesterday which apparently will be focused on “Serious Anime”. While I’m not wild about paying an extra $5 for yet another anime service, it is something to keep an eye on.