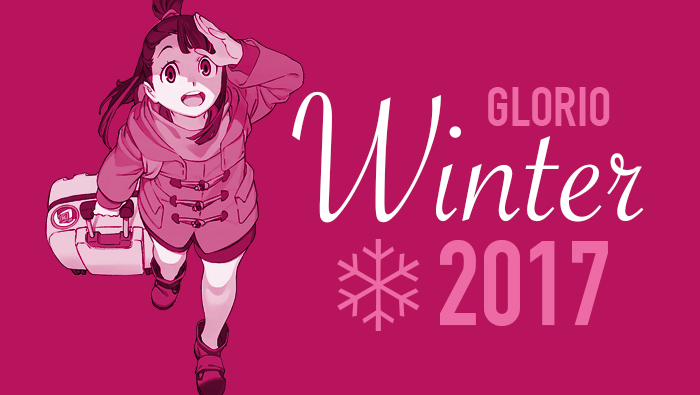 Part 1 of our winter preview guide was pretty bleak and part 2 is not much better. Fortunately there are some glimmers of hope. The most notable is the return of Little Witch Academia, Trigger’s magical OVA series now formatted for TV. Aqua tells me Scum’s Wish is also good if you like horrible people doing horrible things, but if that turns out bad feel free to place 100% of the blame on him. Let us know if anything else looks interesting to you, brave readers, and we’ll see you soon with our first looks in the next few days.

You can read Part 1 here.

Gabriel graduates from angel school and descends to Earth to continue her education… or that was the plan until she developed an addiction to video games and doesn’t want to do anything else. Add this to the huge pile of “Doga Kobo wastes their considerable talents on trash source material” shows because this does not look good. I’m not sure what difference adding angels and devils makes when watching the trailer. It just looks like another boring cute schoolgirl comedy with nothing interesting to get excited about. It’s going to take some really jokes or something to make this stick.

Finally, something good! Had we voted on more than just TV series in our Top 10 anime of 2016, there’s a chance Little Witch Academia: The Enchanted Parade would have been #1. If you’re not familiar, the story is about a young witch named Akko who is low on talent but high on determination, trying her best to become like her hero, the famous witch Shiny Chariot. The series’ youthful energy and stellar animation give it a mainstream appeal slightly more in common with something from Ghibli than the usual late night anime fare. It’s extremely charming and this is by the far the safest bet for being good this season. The only question is whether or not they can keep up the animation quality throughout the run of a full TV series. It’s one thing to make a combined 80 minutes of fantastic animation over 4 years, it’s another when you have to do 12 or so full episodes in a few months. Even if it doesn’t hold up every week though, it’s going to be hard to ruin this one.

A country that looks like a bird is divided up into 13 wards or states, all of which are monitored by an organization named ACCA. That seems to be the only info I can find on this series, so not exactly sure where we are going plot wise. The trailer looks cool though, with its jazzy music, people smoking cigarettes, and seemingly no high schools in sight. Otherwise there’s just a lot of standing around and talking. It’s too early to call this one but at least it’s open ended enough to have potential. Maybe with some good writing and characters it will turn out OK.

I’ve seen enough to be convinced that Steins;Gate was a fluke and that the “Science Adventure” series is bad. Chaos;Child is a sequel to the first game in the series, Chaos;Head, which was not good. Needless to say, the expectations are low. The plot of this particular game centers around a major earthquake that happened in 2009 (that sounds suspiciously like a real earthquake from 2011) and a series of mysterious deaths that happen during the reconstruction. I’m sure our hero and his harem of waifu bait will get tangled up in figuring out what happened. I’m doubting this will be more than nerd wish fulfillment hiding under a thin layer of murder mystery, but we shall see when the double length first episode airs.

“Hand Shakers” are pairs of people who get magical weapons when they hold hands. I guess they fight each other or something. The latest trailer kicks of with presumably the main pair bathing together, so already off to a great start. I know it’s not based on a light novel, but the dumb premise and god awful character designs sure reek of it. It also has some of the worst animation I’ve ever seen in a trailer, where you in theory would be putting your best looking clips. This looks like hot garbage anyway you spin it, I’m not even going to bother looking for a positive.

I’m not even sure this CG garbage belongs in this guide but from what I can tell it is an actual full length series so here we go. Based on a mobile game, it’s set in a zoo where all the animals are turning into girls for some reason. I child wanders in and they all become friends and go on adventures etc. etc. Apparently there is a better trailer but it is region locked and I don’t want to waste any more time on this awful looking show that is probably just a commercial for the app.

A lonely office worker saves a dragon who follows her home to pay off the debt. The dragon can turn into a cute anime girl maid. I was on board for the first part but man, the second is tough to swallow. Watching the trailer doesn’t help much as it seems the titular dragon maid is that particular brand of high energy, squeaky voiced anime girl I can’t stand. That said, if the jokes are good and the animation stays at the level we expect from KyoAni, this could be watchable or maybe even entertaining. I do have a soft spot for dumb comedies, so I’ll at least give it a fair chance.

Marginal #4 is a fictional idol group that its creators are trying to bring to life through various mediums, including this anime. The story follows both their careers as idols and their normal lives as high school students. Yawn. Normally we like to say “looks good if you like idols” but this seems dull even by those standards. Of course I would say the same thing about Love Live so maybe I’m wrong and this will be huge. I’m still going to say it’s not.

This may look like the latest cute, pastel-tinged romance from P.A. Works, but after School-Live and Magical Girl Raising Project you should know better than to trust Lerche at this point. Scum’s Wish is actually about a seemingly perfect couple who are actual horrible people with ulterior motives… or at least that’s what Aqua tells me, who is a fan of the manga. I’ll take that as an official endorsement, so this should be good. If it’s not, blame him Personally I’m down for some relationship drama and emotional manipulation, so bring it on.

As the second multimedia idol project on this list, BanG Dream! is a bit different in that it also involves the real voice actresses as part of the process. That’s pretty common actually but it seems this show is embracing it right from the start. As for the anime, it’s about a girl who finds a cool guitar at a pawnshop and decides to start a band. I’m not sure how much music they will be playing based on the trailer, but hey at least they are pretending to play actual instruments. How quaint.