The bog-standard isekai show, but Shit Protag gets to enslave women.

How Not to Summon a Demon Lord is mostly what you’d expect to see in an isekai show. Shit Protag gets summoned into a game world where he’s hilariously overpowered, and then meets a bunch of easily-impressed women, many of whom have water balloons stuffed down their tops. He then proceeds to sexually assault one of them them, is thanked for it, and adopts her. It’s bad and boring and creepy as hell and you shouldn’t watch it.

This show does a few things that are bad in novel ways, though. The big one, which we needn’t spend much time on, is that the inciting plot moment here is Shit Protag accidentally enslaving the two women who summon him into this world. I feel like there are inconsistencies inherent in the in-universe justification for this, but they’re not important for now; what matters is that this show wants to set up this power fantasy, so it does. We get inner monologue about how he has good intentions and is just bumbling through this, but everything he says and does is super exploitative and shitty. This show is trying to be a power fantasy about enslaving women, and it’s dishonest about it. 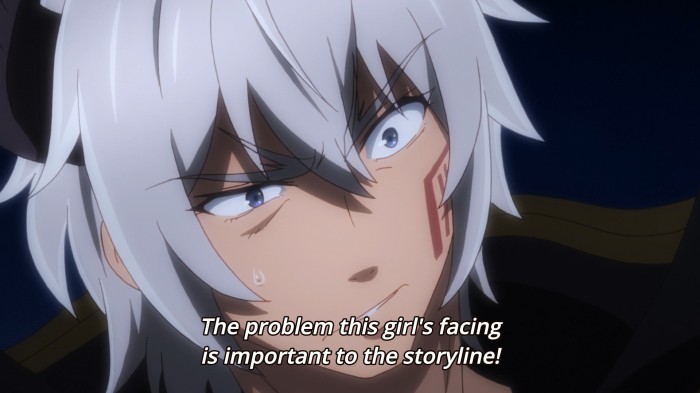 I’m glad someone pointed this out. I wouldn’t have noticed on my own.

Even when viewed as an on its own terms as an attempt at being a power fantasy, though, this show fucks up.

The opening monologue sets up a universe where Cross Reverie, the game whose universe Shit Protag is sucked into, is the most-played game in the world, but it is a bad game. It’s super rote and doesn’t appear to have a single selling point. I’d suspect that maybe the character creation is cool, or the battle system is somehow compelling, but we see neither of those are true. The few player characters we see look like stock avatars, and the battle system is laughably unbalanced. A single overlevelled player dominates the world with a unique item that essentially makes him invincible. This game would be boring for that player, and frustrating for everyone else.

I should probably also explain what I perceive as an inconsistency in the framing device. Shit Protag has an item that reflects all magic, so the enslavement ritual didn’t work and instead meant he enslaved the people who cast it. If that was the case, though, would the summoning not have failed, too? I feel like this show would have been at least a little more interesting if it was about inept, meatspace Shit Protag trying to take care of two video game NPCs, one of whom is host to a very powerful demon, in the real world. I’d also, you know, prefer it if the whole slavery thing wasn’t here.

I’d have included a screenshot from the ending sequence, but I don’t want to violate the terms of service of Glorio’s hosting provider

Euri’s verdict: I feel genuinely awful for the animators on this project

I understand why light novel authors and animation studios are piling on shows like this. I don’t like it, but I understand it. Not until this one, however, have I truly felt pity for the people that have to work themselves to the bone to put… this shite out. It’s another run of the mill isekai show that really doesn’t deserve thinking about, with minor additions including feeling embarrassed about molesting a cat girl and yet molesting her anyway, and having two girls faun over him because… well, no good reason, actually. In fact, even with the enslaving spell bouncing back, the elf and the catgirl don’t seem to actually care and are still fighting over who gets to sleep with him.

Slavery is a new low though, I’ll give it that much. The only thing going for it was that the women are women, and not kids as is usually the case. That is, as you might have already guessed, until the ending sequence debunks that completely. Don’t waste your time with this – twenty minutes of sleep will be far more productive.

Damn I wish I was this cool

3 thoughts on “First look: How Not to Summon a Demon Lord”