Nothing. Just nothing. I mean, Shit Protag summons the queen of the fairies with the philosopher’s stone, and becomes her servant, and harnesses the power of the four fundamental elements (King Solomon, Clovis I, Otto the Great, and Jesus Christ) to become immortal, and is transported seven years into the future like Link in Ocarina of Time. But seriously, nothing happens. He doesn’t even get an ear piercing.

I could summarise the plot, but it wouldn’t be useful to anyone. What you need to know about this show is that Shit Protag is here, he has a harem, and there’s gonna be smooching and butt grabbing in the future. Some or all of it will involve children. Dumbledore’s here too. There are a lot of isekai trappings, but it’s not technically an isekai plot. The animation is mediocre. They are leaning pretty hard into an Attack on Titan aesthetic. The villains are into pentagrams. I don’t know what you want from me.

Nothing of interest happens in this first episode, and for once it feels like the people who made this show understand that. Were it not for the preview for the next episode, I’d suspect that this entire enterprise was a front for some kind of tax dodge. Unfortunately, the preview was there, and we must confront the reality that this show is an excuse for Sexual Hijinks™️ in Japanese Europe. I suppose, were I to provide some kind of constructive feedback, it’d be that if you’re gonna make a show like this, it should include some instances of the reason you’re making it in the first episode.

We watch some real garbage each season, but shows like this sometimes feel like the worst of the bunch. They’re certainly not good and they’re not offensively bad (though in Ulysses‘ case, not yet). They walk a very bland line, refusing to do anything notable, anything that would dare allow the viewer to have more than a few words to say about it. Nothing happened. Nothing even needed to happen, because this episode is a throwaway backstory for the protagonist. Joan of Arc isn’t even in this episode. This show is inexplicable.

The second episode though, stay tuned for that. They age everyone up and give all of the women huge, physics-defying breasts. Joan of Arc shows up as well – she’s a child and is naked in the episode preview. I’m sure this show is going to give us a fucking fascinating story about alchemy. Avoid. 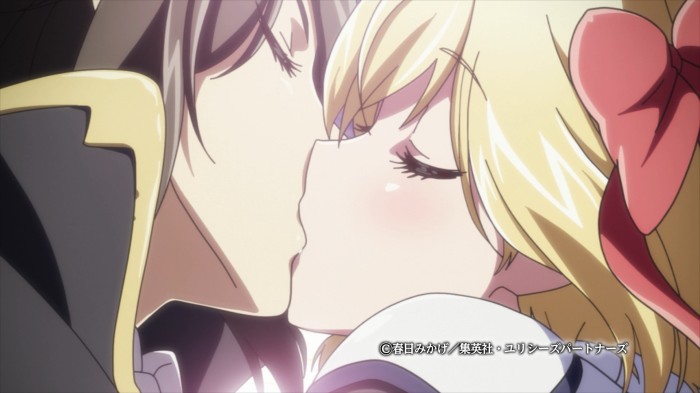 Here’s shit protag, aged up and kissing the young Joan of Arc