Part one of a step-by-step guide to grooming a reluctant child.

This show has a few merits. A setup that could be used to tell a compelling story. Some pretty damn good animation. A very good ferret. Honesty. Uzamaid! is, unfortunately, somewhat less than the sum of these parts.

We’re gonna need to take this in layers. I’m going to be discussing assault, and we’re gonna get into some extremely creepy shit. If you don’t want to read on, here’s a summary: do not watch this show.

On paper, Uzamaid! is essentially a gender-swapped Home Alone, but the wet bandits are one person, and she’s a sexual predator who has the blessing of the parent to be in the house alone with the kid. So, actually, not very much like Home Alone at all. I’m not convinced I would enjoy the best version of a show with this premise, but there’d be an easy villain and an opportunity for some good slapstick if said villain was suitably inept. Unfortunately, Tsubame is far from incompetent. She’s extremely physically fit, and appears to have the ability to foil any plan to thwart her. On top of that, the dad is so detached from his daughter that he is unable to see her dislike for Tsubame as anything but interest, and is excited enough by this that he’ll put up with anything to keep her that way.

That framing is bad enough, but within it is another, darker portrait. This is not a fantasy where it’s all fun and games and everyone gets along, it is a universe with real emotional consequences. Misha, the prepubescent target of Tsubame’s affections, is legitimately terrified. The first time she’s alone in the house with her, she curls up in the foetal position on her bed, panicking. Later, she sets to searching the internet for how she might be able to murder someone and get away with it. This is, by the way, after Tsubame has already snuck into the bathroom with her and held her against her will on numerous occasions, sometimes in front of her consenting father, so it’s not just that she’s getting some creeper vibe and acting on that; it’s rational, justified fear, based on demonstrated behaviour.

Uzamaid!, however, presents all this in an upbeat way. It’s funny, apparently. I’m not sure where the punchlines are, but there must be some, because this show looks for all the world like a slice-of-life show about harmless antics and the day-to-day tribulations of a child’s slightly non-standard domestic life. Perhaps we are being pushed to assume that Misha’s outbursts are simply a result of Tsubame reminding her of her recently dead mother, and once she moves on from that, she’ll realise that Tsubame only wants the best for her, and she can finally come out of her shell. That’s demonstrably not true, though, and even if it was something that could be argued in this case, it’d be a pretty fucked up message, Milo.

And still it gets worse. Not content with the passive, implied message that sexually assaulting children might sometimes have positive consequences, Tsubame has a manifesto for us about how prepubescent girls are the height of beauty and sexual desirability, and how she’s been uninterested in her peers since high school. This philosophy is presented by the show as a good and just thing. With a little context, this is hardly surprising; the author of the Uzamaid! manga has a storied career writing for lolicon pornograpy anthologies, and Tsubame is very much a self-insert character. I have no reason to believe that Tsubame is anything other than a radically honest portrayal of the author’s self-image, which gives us some interesting parallels to contend with.

We see Misha express surprise to learn that women can be attracted to little girls too. How often does this happen to the author?

We see a flashback of Tsubame being asked out by a girl on the roof of her school, and she declines, citing her suitor’s age. Did this really happen to the author?

We see her express a specific preference for white girls. Is this shared by the author?

So yes, this show is bad. It expresses an awful fantasy, and it does so with a smile, and a not insignificant animation budget. If Doga Kobo are making this out of earnest appreciation for the art, it puts a lot of shows I earnestly like in a very uncomfortable light. If, however, this is simply cold business logic and they are confident they’ll make their money back on it, that’s… worse. And they’re probably right, too.

The circumstances are slightly different, but this show is pretty much what you get if Hayate from Hayate the Combat Butler was a paedophile. It saddens me that so much care and attention from Doga Kobo can go into a show like this over almost anything else. 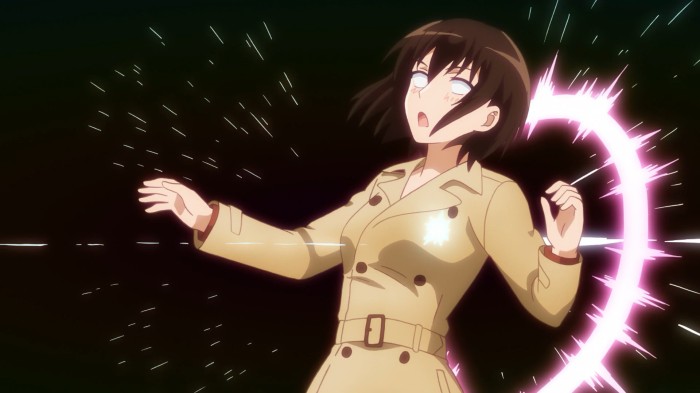