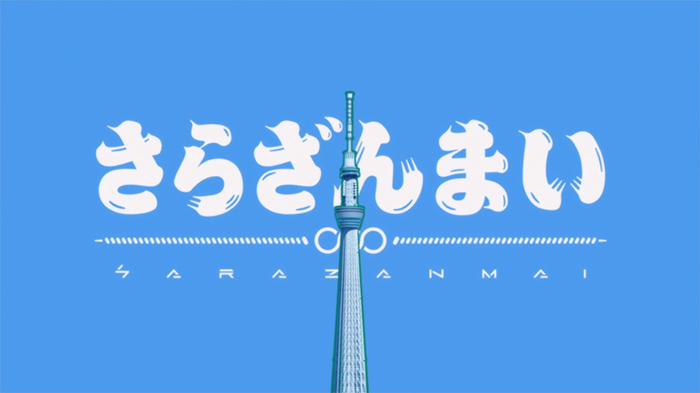 Three boys bond together after being turned into kappa.

It’s impossible to talk about this show without mentioning the director, Kunihiko Ikuhara (Revolutionary Girl Utena, Penguindrum). He’s the type of auteur whose personal touch defines all his work. If you’ve seen any of his previous series, you’ll know to expect an explosion of dreamy, colorful visual metaphors that typically leave people asking “what did I just watch?” In that regard, Sarazanmai is exactly what what we thought it would be. If you have already formed an opinion on Ikuhara, this is not going to change your mind.​ 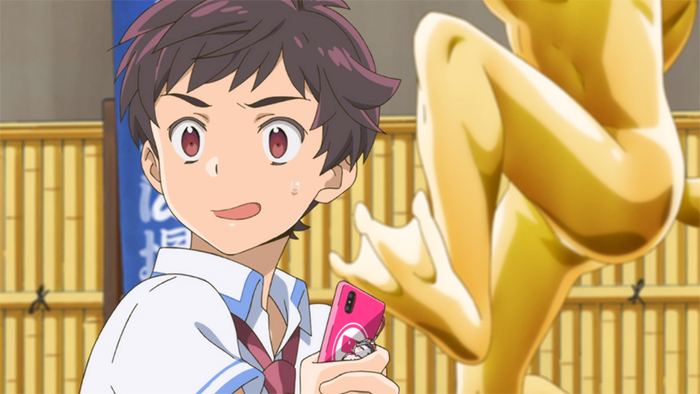 I’m a big fan personally, and Penguindrum is one of my favorite anime of all time. So in that context, the first episode of Sarazanmai blew me away. At just face value, it’s visually stunning. This project was revealed nearly two years ago and I have to wonder if they’ve been working on it ever since. There’s a surprising amount of action to animate, and it all looks great. I’m really happy to see MAPPA is up to the challenge of bringing Ikuhara’s vivid imagination to life.​

More importantly than that though, I am totally ready to explore the questions about connections and desires brought up in the first episode. My favorite part of watching an Ikuhara anime is seeing how he manipulates your thoughts and feelings through the visuals to make you think about the topic at hand. The twist in this episode (I don’t want to spoil it) is also a reminder that Ikuhara doesn’t pull punches when exploring these themes, at least compared to most other anime. I’m super excited to see more.​

I feel like any additional writing wouldn’t really do the show justice at this point. So much of the storytelling is tied to the audio/visual experience that you need to just watch it yourself. We will probably do some more in-depth discussion later, for now I’ll just say if you’ve never experienced Ikuhara’s work before now seems like as good a time as ever to give him a try.​ 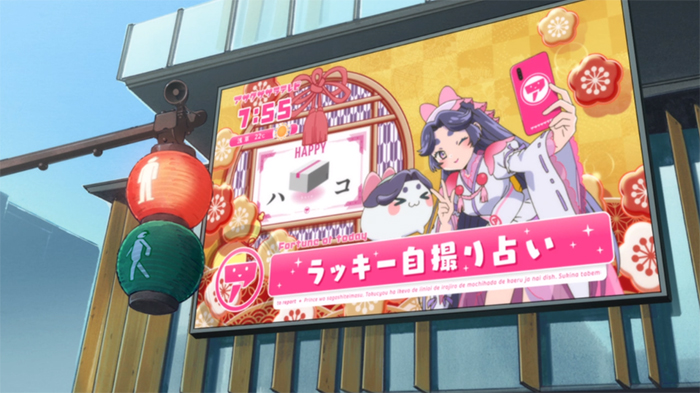 Even if all the promotion for Sarazanmai hadn’t traded heavily on Kunihiko Ikuhara’s name, it would not have been difficult to guess that he was at the helm for this one. It bears all his trademarks – spectacular visual flamboyancy, extensive use of imagery-as-metaphor, a fascination with the ways at which people connect with other people,  magical girl-esque transformations, and just being really, really confusing in general.

At this point you’ll probably know whether you’re into his particular brand of lunacy or not. Personally, I am and I count Utena and Penguindrum as two of the best shows I’ve ever seen, so I’m excited to see what Ikuhara has to say in 2019, and with the might of MAPPA behind him. There was definitely a lack of coherency to this first episode but again, that’s simply the house style, and I’m willing to accept it given that the threads are normally tied together by the end. I think it’s interesting that Ikuhara and co seem to be focusing primarily on male characters this time, considering most of his defining work is about women. He’s also perhaps the one anime director I’d trust to say something about the topic of transgenderism, should they choose to take Kazuki’s character in that directions.

The only major concern I had was perhaps the overly humorous tone of the episode, complete with a hefty helping of butt jokes. Ikuhara’s works have always famously hidden away dark depths behind their wacky antics, occasionally even using the tonal whiplash between the two to devastating effect. Nevertheless, I don’t think I got enough of the distant, spacey melancholy I want from an Ikuhara show from this opening episode. With that said, I fully expect them to start drilling down into some more profound themes soon, and I’m excited to see what sort of strange trip we’ll be taken on this time. 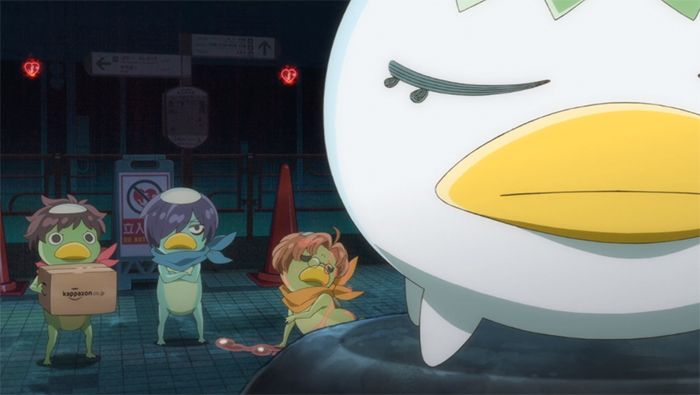 There’s been a rising tide of Ikuhara fatigue in anime fandom recently and honestly, while his work’s always had significant, capital-I Issues, I don’t get what the guy’s done wrong to deserve people being tired of him. When Revue Starlight was airing, for example, a show directed by one of his proteges and therefore heavily indebted to his style, frustrated fans of the series started to blame the fact that commentators tended to pass off its flair as an Ikuhara’s homage, rather than to the the theatre tradition that influenced both, on the man himself. Yet is Kunihiko Ikuhara to blame for the average anime critic’s inability to properly distinguish the influencers and the influenced? The fact that his is the first name you think of when you see glamorous fencing and elaborate transformation sequences only proves just how memorable his works are, and the frequently subsequent argument that theatrical showmanship is all he has on offer, is simply untrue. Calling Ikuni out for doing his same spiel again is like being disappointed Jackie Chan is doing yet another fight scene in a large playground full of props, or Martin Scorcese is doing another three-hour crime epic where the main character talks into the camera. It ignores his talent for re-contextualizing these motifs in every world he and his team create. Yes, the traffic signs, the geometrical shapes, the musical numbers, the Greek choruses and the thick layer of repressed sexuality are old chestnuts at this point, but the way in which he continues to implement them in new and creative ways, in which he so explicitly owns them continues to dazzle and impress time after time again.

Saramanzai once again comes in like a kaleidoscope of everything we’ve come to known and love from Ikuhara and his team. Miraculously blessed with a budget I can explain only by assuming they got a visit from a genie in a bottle — or by the fact that they decided to team up with a studio notorious for overworking and exploiting its animators, oops — they’re allowed to cut loose more than ever here, and it shows. The visual ambition of it all makes Saramanzai a delight to watch even by the casual viewer. Like all of Ikuni’s works, its narrative is largely dependent on symbolism, metatext and abstract musings on broad subjects like “connections” and “desire”; but even on the most superficial level, it has an offbeat charm and creativity to it that doesn’t need to mean anything to hold value. Similarly to Mawaru Penguindrum’s grotesque family tragedy or Yurikuma Arashi’s alien invasion turned treatise on the perception of lesbian relationships in modern-day Japan, Saramanzai operates on different levels, one where it’s just a crass, colourful slapstick comedy, one where its recurring motives (boxes, smartphones, butts) convey deeper meanings that are clever, yet relatively easy to interpret, and one that probably only Ikuhara himself will ever fully comprehend. In any case, this show sows enough seeds to convince me its creator once again isn’t content with stressing style over substance. Ikuhara is far from out of ideas just yet, and I can’t think of any reason to deny him a forum to express them without compromise. I, for one, welcome our new kappa overlords. 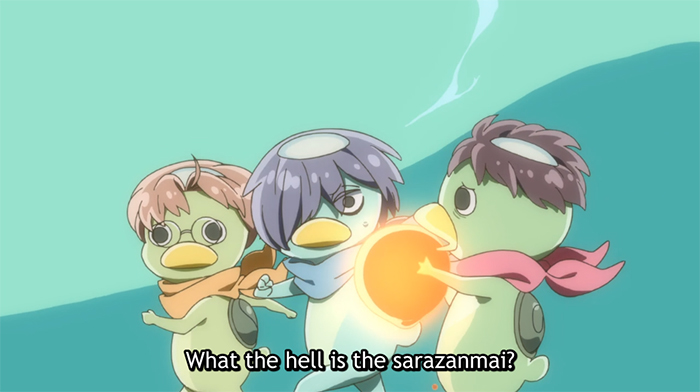 I’m not going to bother writing much about this one. Suffice to say I’m not up to publishing an entire thesis revolving around elaborate metaphors and convoluted symbolism, and all the ways in which they play out via Ikuhara Kunihiko’s stream of consciousness narrative style. I’m not claiming the guy lacks talent, or that he doesn’t put plenty of time and effort into his stories, or that they don’t look good. Far from it. However, I’m also not about to watch something I don’t enjoy just to be able to meticulously dissect every frame in order to satisfy my inner elitist. I simply don’t have the energy for it.