Recap: A new girl shows up to lay claim to Godou and throws everyone into a panic. Meanwhile, the whole prophecy involving Athena seems to be coming to a climax.

Lifesong’s Thoughts
This last arc has brought the story full circle. We are back with Erica and her relationship with Godou, and his relationship with all the girls following him around. New girl Ena forced her way right into hostile territory as she made her intent to claim Japan’s first campione for herself, forcing Godou to answer the question of what his harem is to him. Of course being the young and not so smooth guy that he is, Godou claims they are all just friends, right…

Campione! has played with ideas of polygamy before, but it never came out and said it directly before. The gods of the ancient religions found in this anime are famous for these types of relationships so it hardly betrays the setting. The way this anime spins it for drama works.. kinda.

A little sister’s wrath is still scary, even for a campione!

I’ve often said to my friends that I don’t really like harem anime; my reason for that does not come from some moral ground however. I don’t need my fiction to be moral or reflect all of my real world beliefs, ideas and preferences. A good story is a good story and that is where it ends, any and all sins committed in that fiction end when I when I put it down. My problem with harem anime is a far more fundamental one: it doesn’t usually make for good storytelling.

In a harem anime you generally have a bunch of girls chasing a guy who is either too dense to know any better or too much of a indecisive pervert to settle for just one girl. There can be all sorts of developments with the cast, but inherently and by design there is rarely a conclusion. Modern Japanese society does not allow that type of relationship. The formula at work here is one that is not allowed to be realized. In the end the conclusion of such a story is forced into one of two categories: The ‘Make a choice’ ending or the ‘and the story continues’ ending.

Date montage, because Erica is still the primary heroine of this show.

One of thing I’ve really enjoyed about Campione is that the harem never has been the elephant in the room. It has been acknowledged many times, even Godou who claims the girls are all just friends really does know better.. Okay, so not always, but he has the general idea down, and that is lot more than the average dense guy harem cliche. I had been wondering if Campione! would address the harem in a typical fashion as the series came to close or not, and while Campione! is not quite finished yet, that answer has been given, at least in part.

Lets us ignore that this whole harem setup is male fantasy wish fulfillment to the maximum for a moment. If you are in it this far you should know that by now, and there isn’t much more to say on that front. I like the way Campione! has used it’s setting to differentiate itself from the usual formula ever so slightly and I want to explain why.

Erica is the glue for this harem story that holds it’s all together. This is shown in the way that Liliana bows out to let her deal with the situation with Ena and then again with the way Yui okays it when it is explained to her by Liliana. Erica’s acceptance of both Lilliana and Yuri having a relationship with Godou is then reinforced when Erica gives them both a phone call.

Those mistress rankings that Ena threw out? Ironically, or perhaps unironically define the structure of authority in Godou’s harem perfectly. The interesting thing here is that instead of everyone looking to Godou for an answer, it all comes back to Erica instead. Erica is fighting Ena not just to keep her away from Godou, but to establish herself as number one against a stronger woman who is threatening to take Erica’s place. Who winds up with Godou is not what is at stake here, it’s who’s in charge of the harem when it’s all said and done, and it seems like Erica won. 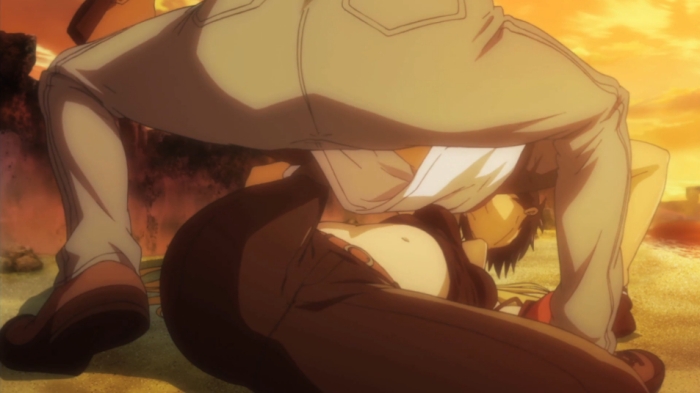 Yes, I chose the most ridiculous shot of this scene I could get.

Of course, in the process Godou also saved Ena who got possessed by a sword, and she will surely join the harem as the rebellious girl who openly defies Erica or some such. That said, I can appreciate the way it all went down, and how Erica managed to bring something a bit more refreshing than the average harem drivel as we move on toward the climax of this anime.

Speaking of climaxes and elephants in the room, I can’t complete this blog without stopping a moment to talk about THAT scene. If you watched the episode, you know which one I mean. Sex magic at it’s finest here. That was possibly the apex of ‘cheesy-hot’ anime right there. I thought Highschool of the Dead set an unreachable record of ‘cheesy-hot’, but nope Campione just smashed that record. I hunted down the chapter this scene comes from and read it. Basically they make all kinds of qigong references that were omitted from the anime, but it was otherwise the same thing. Divine Protection: Hottest piece of cheese, most ridiculous piece of cheese, or both? You decide. 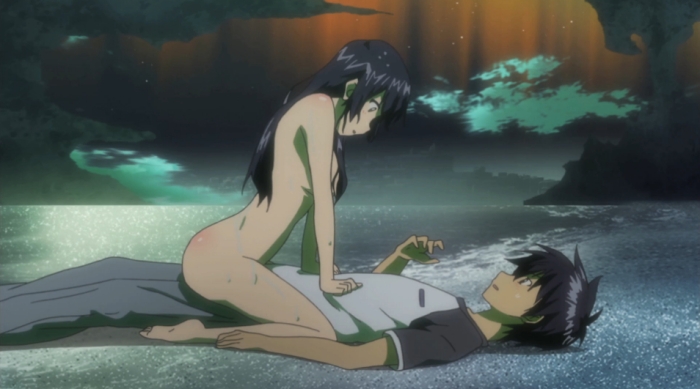 Susanoo
Susanoo is a Japanese storm god. He was banished from heaven and came to earth where he slew a serpent that was after the last living daughter of the family he was staying with. He obtained the sword Kusanagi from inside the serpent.

Kusanagi
Kusanagi-no-Tsurugi is Ena’s weapon. The original name of the weapon was Ame-no-Murakumo-no-Tsurugi which is why you hear two names for it in the anime. I am not entirely sure if the anime is trying to make a distinction between the sword and the beast inside the sword or not. The fact that Metis showed up and absorbed it might be playing off the fact that it was originally obtained from a serpent and may or may not be playing off that origin. Either way the two names may or may not be important at all in the Campione! universe. If they are hopefully next episode will make this all a little bit clearer.

Metis
Metis was a Greek Titan and the mother of Athena. I don’t really know that much about Metis, but open some brief research I’ve found that apparently in Greek mythology Zeus turned her into a fly and ate her and then Zeus had his head split open by Hephaestus and Athena was born. And you thought that scene with Erica and Godou in the interim world was odd!