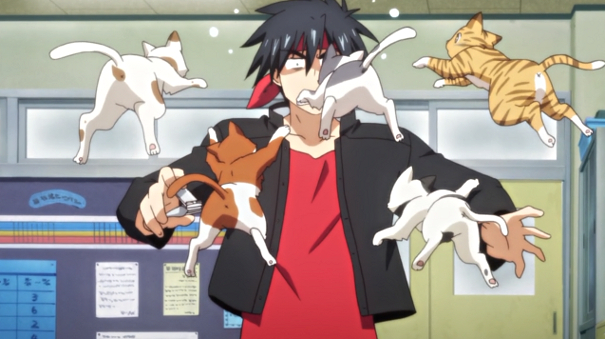 Recap: Now that Komari’s story has ended we kick back into things with some silly antics from the Little Busters cast. Prankster Haruka who has been showing up in Riki’s class is up to her usual troublesome ways causing trouble for other, and also being hunted down by the disciplinary council.

Haruka joins the Little Busters when she is invited, but maintains an element of aloofness that seems almost intentional. When she is caught with a bunch of sodas in her bag the disciplinary council assumes she stole them. Riki stands up her claiming that Haruka is a prankster, but not a liar. The rest of the Little Busters cast pitch in to pay for the soda’s, and the disciplinary council lets Haruka go.

Lifesong’s Thoughts: It’s a new day for Little Busters. With my disappointment of the last route my expectations have been tempered, and I enjoyed this return to the sillier side of Little Busters. I’ve mostly finished Komari’s route in the visual novel, and I could write up a blow by blow of what I think J.C. has done, and will probably continue to do with this adaptation; however, I am determined not to let what I want this anime to be to stop me from enjoying it for what it is. If anyone really wants that write up let me know.

Unlike Komari who has a very ‘Key like’ character type, Haruka is built out of an archetype I can easily sniff out from a mile away. I am reminded strongly of Miyako from Ef or more recently Haruka from Amagami SS. Now I do have a confession I’ve been influenced on Haruka a decent bit thanks to her interactions in the common route of the Little Busters visual novel. One scene in particular has it nuance complete changed in the anime.

In the anime Haruka covers her own eyes in a guess who game, and Riki simply corrects her. In the visual novel she makes a comment about how plain she is, and how she thought that if she covered her own eyes no one would notice it was her. The anime just makes her look like a doofus, which she is, but that scene was pretty pointless without that punch line. We already knew she was a doofus, and it wasn’t really meant to be a joke. That scene just makes me think that if this anime adaptation works in an impact like past Key anime it will be because of the power of the source material, and in spite of the director.

Despite my above complaint I had a lot of fun with this episode. I may have called Haruka an archetype, but she is an archetype that I like, and one that doesn’t need much of an introduction for me to care about. Best part of this episode is that for once the jokes were actually funny enough to make me laugh, and that scene with Riki getting everyone present to pay for Haruka’s drinks was sweet if a bit hopelessly naive. I do hope that the anime didn’t expect us to believe that Haruka actually paid for those drinks as her character is not nearly well established enough to invest trust in yet, but it helps define Riki’s character so I am okay with it for now.

On purpose or doofus?

I do have one thing I am kind of curious about. In the visual novel the common route scenes with Haruka, and her relative are untranslated, but they didn’t seem nearly as hostile as they are here. Is this another nuance being changed to fit the anime? If so should I be worried? I’ll probably enjoy this route more if I know that it’s not already being butchered by a senseless director, who for the record I dislike far more than this Little Busters adaption itself at this point.

Honestly I’m not sure if we are actually digging into Haruka’s route or not, but as this episode was more or less dedicated to her I am looking forward to seeing how her route does progress. It looks like next week we get some time with Kud who if nothing else is full of cute language antics. Wafu~!