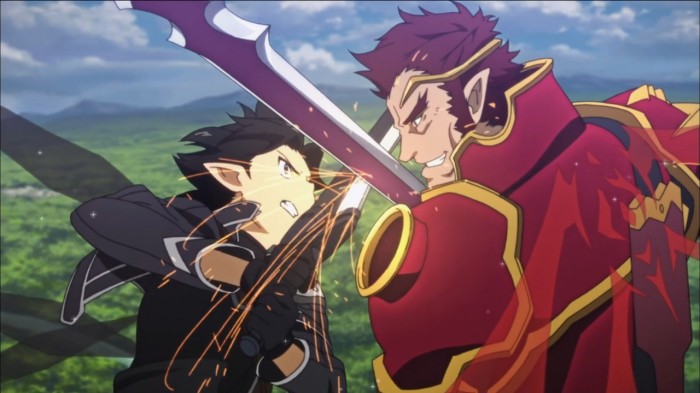 Recap: Our heroes rush to the rescue of the Sylph and Cait Sith diplomats.

Iro’s Thoughts:
The subplot about race politics in ALO comes to a climax in this episode as Kirito and Leafa barely manage to reach the meeting in the nick of time. Kirito challenges the commander of the Salamander attack force, General Eugene, lauded as the strongest player in ALO, to single combat. After the fashion we’ve come to expect from Sword Art Online, everyone present fails to do anything relevant as Kirito trounces his opponent. Of course.

Multiple little inconsistencies show their faces during the fight, presumably slights we aren’t supposed to notice thanks to the cool fight scene and the animation bump (the show has always been visually impressive, but this episode was exceptionally pretty). None of them are particularly damning on their own, but considering the amount of detail placed into building the setting of these video games, seeing concepts being simply ignored just for a good action sequence is rather off-putting. Just after explaining to us last episode that speaking the proper incantation was necessary to use magic in ALO, Kirito just throws out a smokescreen mid-fight, using it as cover to pop in behind Leafa and swipe her sword. Now equipped with dual blades as he was in SAO, Kirito is able to functionally ignore the special powers of Eugene’s equipment and win the fight handily.

While this would perhaps make perfect sense if Alfheim were a living, breathing place, it is, in fact, not. Alfheim Online is a video game: a program with set rules and limitations. I’ve argued this point before – when something happens because it must happen, especially if it conflicts with the limits of the setting, it’s bad writing. In Sword Art Online, items have always been represented in a very game-y way. As far back the second episode, players ate food by opening up their inventory menu and taking out the food, adding condiments not by pouring them on as in reality, but by activating them as items. Equipment was represented as physical clothing, but it wasn’t put on or taken off normally; it was equipped via the menu, at which point it appeared or disappeared on the player. So how was Kirito able to just swipe Leafa’s sword off of her painstakingly animated ass? They didn’t quickly go into a trade window against the clock where he asked for her weapon, he just flew up behind her and yanked it off her waist for himself.

That leads into the problem of him being able to use dual blades in ALO at all. We were shown in episode 16 that the skill that allowed him to dual wield in SAO doesn’t even exist in the coding of ALO. Not that this stops him from doing so now – once more, the stated limits of the setting and the consistency of the world are as nothing in the face of the plot. He just takes something that’s equipped on a different player and uses it as his own weapon. So could just anyone do that? ALO has been running for a while, but nobody had the idea to try using two weapons at once, or to just sneak up behind a player and steal their weapon? Again, while this would make perfect sense in an actual world, under the premise of the show taking place within a video game, it boggles the mind.

At any rate, Kirito adds some more points to his wish-fulfillment bingo card as the Sylph and Cait Sith leaders snuggle up to him and flash their scantily clad avatars complete with bouncing body parts, and Leafa manages to act like a jealous lover despite having known Kirito for only a day at most. He also pulls a boatload of money out of his ass to fund the alliance – how did he get all of that? Did it carry over from SAO, unlike all of his items (even if it did, I thought he spent it all on the lake cabin and/or on the equipment he’s wearing now)? Did he get it as loot from defeating Eugene, or what? It remains unexplained, but it doesn’t really matter either way, as plot dictates that the alliance must be well-equipped to help Kirito out later. Once that’s over, we finally get back to the actual plot of the show, with our heroes taking off for Yggdrasil as Asuna tries to mount her own escape.

All-in-all, the entire subplot feels like a pointless detour. They try to mitigate this by stating both races will help during the charge on Yggdrasil, but the damage is done – the show has succeeded in making Asuna’s plight seem unimportant. While I’m all for adding flavor and depth to the setting, and Sword Art Online has done an excellent job of it for the most part, it doesn’t make sense to do that when the driving force behind your plot is a ticking time bomb – in this case, Asuna’s impending forced marriage to Sugou. Assuming they’re still going for a straight novel adaptation, this isn’t even the last detour into the nuts and bolts of Alfheim that we’ll be seeing. Climbing the floors of Aincrad was a marathon, carefully moving forward towards the promise of freedom while also exploring a strange new world; the current plot is supposed to be a sprint, reaching Yggdrasil as fast as possible to stop the villain from accomplishing his nefarious goal. I can understand how they’re trying to continue SAO’s theme of “living in a virtual world”, but having a time limit makes for a very different kind of pacing compared to the first half, and the storytelling style hasn’t changed to accommodate it.

Dragonzigg’s Thoughts:
Firstly, I’d like to point out that Eugene is the least scary name ever. Aside from that, was the best episode we’ve seen in a few weeks, mostly due to the rather excellent fight that makes up its centrepiece. Around the edges however, SAO remains a little flaky.

But let’s do the good stuff first. I genuinely enjoyed the showdown between Eugene and Kirito, which features some fancy aerial choreography and some impressive visual pyrotechnics. In fact, this is generally a fantastic looking episode, even more so than normal, with amazing landscapes and smooth battle animation.  It’s nice to see an enemy almost on Kirito’s level (even if they do have to find the most powerful player in the game to do it) and the dual wielding is a nice little call back.  It’s cool to see Kirito have to think on his feet as well, improvising a pretty interesting cover story.

Having said that, that flakiness keeps intruding into the experience. It’s painfully noticeable for example that Leafa does literally nothing this episode. Despite the fact she was the entire motivation for coming here, it’s Kirito who takes centre stage and saves the day. All Leafa can do is gawp, something which isn’t exactly conducive to good character development. It makes her look weak and useless, and considering that she’s already suffered from an underdeveloped character, this doesn’t exactly help. And then of course there’s the leaders snuggling up to Kirito and deploying blatant boob and crotch shots in a sequence so gratuitous I wanted to put my foot through the screen. It’s crass and in a show already under fire for being a wish fulfillment fantasy it certainly doesn’t help convince the doubters otherwise.

Back to the positives, we’ve finally seen Asuna get off her butt and actually swing into action, and this hopefully portends the show’s main plot returning, and an end to this slightly boring fairy politicking.  With the show moving into its final stretch, I’m hoping that we’ll be able to build to a decent finale and slough off some of the issues that have been bogging it down. 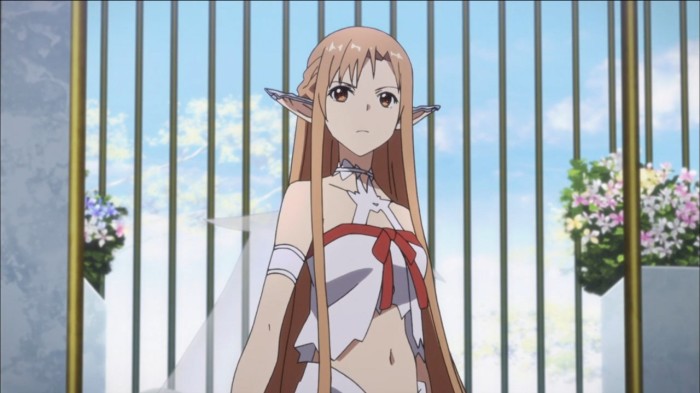