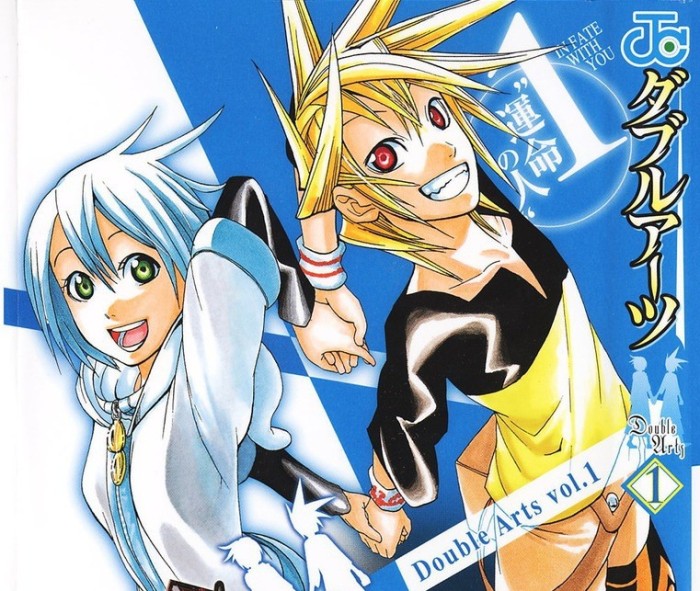 We’re having a very special Random Manga Theatre today – y’see, we’re at number 26, and I started this feature the very same week we started this whole blog shtick. That means we’ve been doing this for half a year! A milestone! Yay! And to celebrate, I’m going to be featuring a manga that is rather near and dear to me: Komi Naoshi’s Double Arts. You may remember Komi Naoshi from RMT 16, wherein I mentioned that you may know him from Double Arts (which I’m getting to, I promise) and from the more recently popular (and depressingly so) Nisekoi.

At any rate, Double Arts takes place in a world that is being ravaged by a plague: a disease called “Troy”, transmitted by touch, that fills the victims body with an unknown toxin and wracks them with fatal seizures once it builds up beyond the body’s limits. Mortality rate is 100%, and there’s no known cure or antidote – there’s only one way to even barely slow down the progression of Troy, and those are the Sisters. Very rarely, certain young women are born with an inherent resistance to Troy, and by touching an infected individual they can absorb the toxins into their own body. But, this is just a temporary countermeasure, and once a Sister treats enough people, then their own body will succumb to Troy as well.

Elraine is a traveling Sister – one of the best – and she’s just finished with a routine treatment and heading back to her room when the seizures begin to affect her. A passerby named Kiri rushes to her aid, and at his touch the seizures suddenly stop – but only while he’s in direct contact with Elraine. He’s someone who is completely immune to Troy, the exact thing the Sisters have been seeking for centuries. So, Elraine is given a new mission by the Sister HQ – return to the Main Cathedral with Kiri in tow, so they can derive a true cure for the plague. It isn’t quite that easy, of course. The world’s a dangerous place, and our heroes are being stalked by a mysterious group called the Gazelle. They’re an organization of assassins, who target the Sisters. For unknown reasons, they want to prevent Troy from being cured, and Kiri is the greatest obstacle to their goal.

So, the couple ventures forth, with Kiri’s childhood friend, hot girl, and expert fighter Sui and World’s-Strongest-Man Fallan Denzel tagging along to keep them out of trouble. And from then onwards, it’s kind of a typical shonen, but it’s typical in the same way Magi is typical: it follows the story beats you might expect (The boy with the mysterious power is the only one who can save the world! They must get stronger and defeat their enemies!), but it does so in a fresh and fun way. The story’s interesting, and there’s a a good amount of worldbuilding and foreshadowing put into the background of the manga for plot events that never happen. 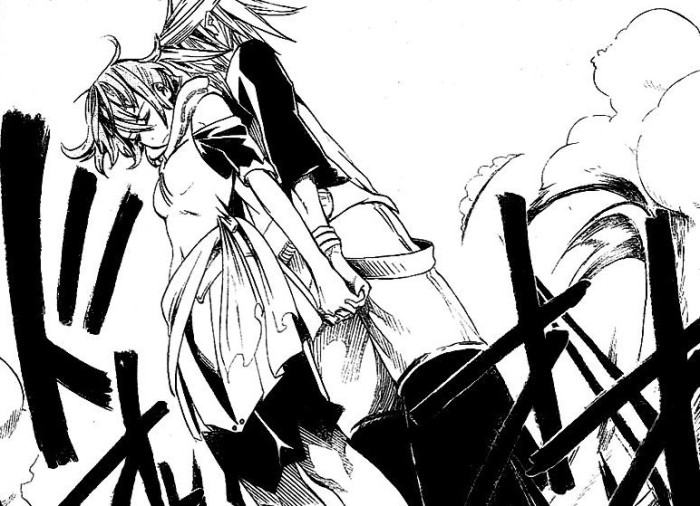 Right, I forgot to mention – Double Arts was cancelled after 23 chapters. Cut short right as the heroes are starting their journey. It’s like if Gurren Lagann ended at episode 3, just after the title mecha was formed, or if Evangelion ended right as Shinji became a pilot. It’s a real shame, especially considering the potential of the story. Apparently it wasn’t popular in Weekly Jump’s questionnaires, even though it was selling like hotcakes in the omnibus volume releases. And thus it remains a footnote in manga history, never to be anything more than a cancelled series that never got off the ground.

Double Arts does a lot of things right, and I consider it a tragedy that it never even got to get past the first act. The characters are fun and likeable, from the bloodthirsty Sui to the stoic-but-childish Fallan, and even only extrapolating from the bare bones we get to see, the story goes in interesting directions. What is the nature of Kiri’s mysterious ability? Who are the Gazelle and how do they know so much about Troy? For that matter, what are the origins of Troy itself? I imagine Double Arts might have worked much better as a monthly manga, since it seems many of the more story-driven manga make roost there, but from the looks of it Komi Naoshi really wanted to get into Weekly Jump. And, as such, all of these driving questions will unfortunately remain unanswered forever.

But, as long as I convince at least one person to check out Double Arts, then my job this week is done.