Hello, and welcome to All Your Monies, where The Glorio Blog’s resident toy and figure collecting crew (and Aquagaze) will run down the last week’s new preorders, turning a loving or scathing eye over what’s been put out for you to spend your hard earned cash on. This week, there’s no April Fools, just a bunch of great figures. 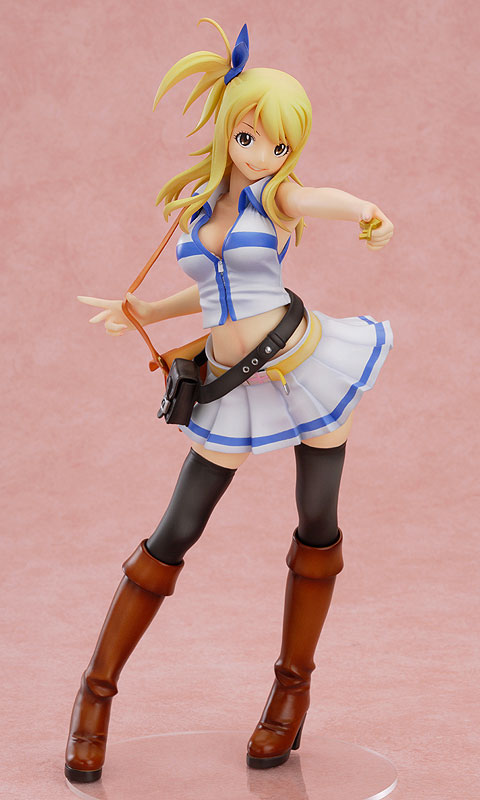 Zigg: Outstanding. GSC continue to deliver the goods and Lucy here is no exception. It helps they’re working from an attractive character design to begin with, but that great pose, smart colour scheme and good detailing mark this one out as a cut above. Special mention goes to those gorgeous boots, which are a great exmple of how painting and shading can sell PVC as an actual material. Ordered.

Lifesong: This is the Lucy figure the fans have been calling for, everything about her looks great. I think I actually prefer the old boots but these are the proper color I suppose. I would like to see GSC make some more figures from this series, maybe Juvia or Erza.

Jel: I’ll leave the finer points to the people who have actually seen Fairy Tail, but from what I can tell this is an awesome figure. Great sculpt, pose, color, it’s the whole package. As a side note I’ve mentioned before for some reason I really appreciate shiny well sculpted shoes and her boots totally fit in that category.

Timmy: Man did GSC do a good job on Lucy. Great pose, great outfit, and especially great boots. That 1/7th scale is a slight issue since I do like my figures to be a slightly smaller for spatial reasons but that is hardly a deal breaker for me, especially at that price. There is also quite a bit of speculation that because of those seams in her top under her arms she is cast off able to match the in-universe figure equalvent, and I would applaud GSC if they took things that far since the joke, and Lucy’s reaction is pretty funny. Castoff or not, I will probably end up getting this and hopefully GSC keeps going and makes me the Erza figure I always wanted.

Zigg: Alter’s skill is as evident as ever, but something about this figure is just off to me. Maybe its the slightly awkward pose – I’ve never been a fan of the ‘over the shoulder’ style, and I feel the colour palette is sort of pale and washed (although that may be bad photogrpahs). Add to that a certain weariness with the KyoAni school of character design and this is the first Alter figure for a while I’m not fully onboard with.

Lifesong: Leave it to Alter to make a girl in an apron look good without sexing her up. A great sculpt and good shading make this figure something for fans and collectors alike.

Jel: Back when I picked Chitanda as my favorite figure of Winter WonFes I was kind of hoping it would be in the lower price range similar to Alter’s price on the K-ON! side characters. That isn’t the case, but I guess the more I look at it this is not as simple a figure as it looks. Her dress and apron is sculpted to near photo-realistic quality and I’m sure that has something to do with the price. I’m a bit hesitant to put in an order at that price tag but I’ll still probably talk myself into it. Judging by Alter’s current track record for meeting deadlines (i.e. they don’t) there’s probably plenty of time to get the money for her.

Timmy: Its quite interesting that Alter ended up making a Hyouka figure but I am quite glad they did. Also equally glad of the fact they used something different then her school outfit. Love Chitanda’s pose as figures in the dinner making process are quite rare and her face looks as lovely as ever. I also wonder if that is a seam line they tried to hide in plain sight on her chest and if so what she looks like with the apron off. Certainly a tempting offering nonetheless and I’ll have plenty of time between now and August to ponder it.

Zigg: Let’s leave aside Vividred Operation‘s dubious subject matter and admit this is  really smart figma. Those red trainers are the highlight for me, really nicely detailed and a good offset to the mostly monochromatic palette of the rest of the figure. The way they’ve managed to avoid turning her short shorts into just a mess of leg joints is pretty nice design too. And that bike is a damn cool pack-in. Definitely one of the better figmas of recent months.

Lifesong: Akane’s one of a kind flying machine makes a great accessory. This just hit me, if she sold these things couldn’t she stop working? Maybe patents don’t exist in the future.

Jel: I’ve been kind of disappointed with the quality of figmas lately but I have to say Akane looks pretty good. Or maybe more specifically, her little bike thing looks really good. I like her red high tops as well. I feel like they could have tossed in a bottle of mayo or something, but otherwise this is pretty much what you would want from an Akane figma.

Timmy: This turned out better and more tempting then I expected. The bike for starters came out as good if not better then I had hoped and would no doubt be great to have because of hoverbikish reasons. Akane herself is equally nice though and they nailed that excited expression that I loved on GSC’s scale offering. Her shoes also stand out along with the fact Max Factory seems to have mastered the art of making joint less shorts. I do wish she came with slightly more accessories but consider me interested regardless. She would definitely make for a budget friendly substitution of GSC’s offering.

Zigg: There’s clearly been a sacrifice of style for poseability here, but considering this is meant to be an action figure that’s acceptable, particularly in  series as pose-heavy as JoJo. It’s still recognisably Joseph here and the paint and sculpting on the bits that aren’t massive ball-joints are impressive, especially the face and the boots. It’s a decent price too and I’m always in favour of older stuff getting a re-release.

Lifesong: Jojo is ready to pull off all your favorite poses, even if he has to look like a robot to do it.

Jel: JOINTS! This reminds me of the less than flattering Square Enix Play Arts line with the big joints and awkward proportions. Personally I would recommend a more FABULOUS static figure, I know they’re out there.

Timmy: This looks pretty good, well except for the gigantic holes in his muscles. It would be nice if they had found a way to cover that up more but I suppose its serviceable for the price.

Zigg: No denying it, this is one damn cool figure  Fantastic pose, really unique and full of verve and movement, and the paint and detailing is top notch too. Could Ques Q be on the verge of usurping Griffon as Touhou overlords?

Lifesong: Possibly the best Flandre I’ve seen. I’ve declared my Touhou collection finished, but her psycho face makes this a tempting figure to pass up.

Jel: Sorry Griffon, I’m officially declaring Ques Q the King of Toohoos. Flandre looks awesome, from the sculpt to the pose to her face options, even the base is cool. The only catch is the high price tag, but for such an elaborate figure that’s probably fair.

Timmy: A very nice version of Flandre and definitely gives Griffon a run for their money. 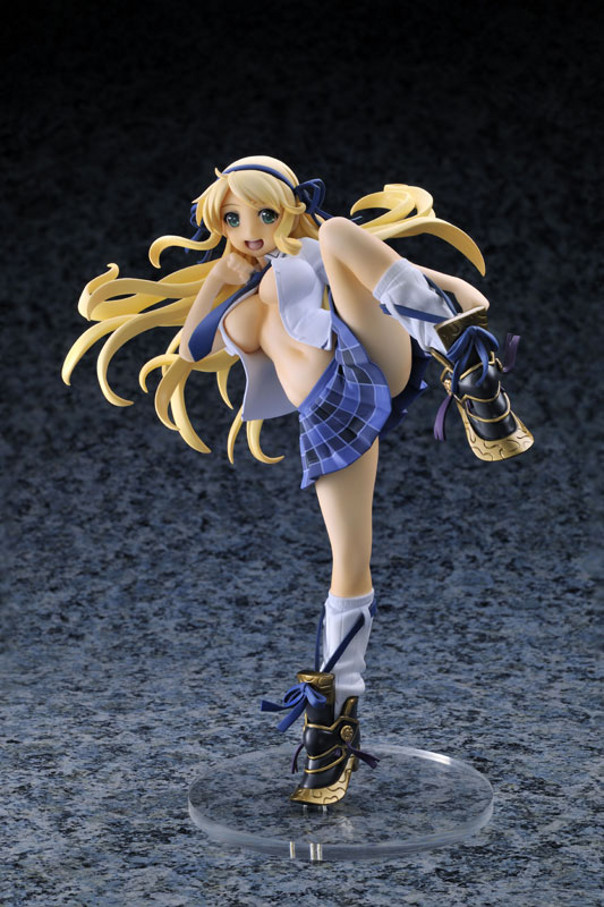 Zigg: I have the Phat Company version of Katsuragi a surprisingly positive writeup, but even though it’s much more actiony-y, I don’t like this one as much. It crosses too much into skeevy territory and lacks the joie de vivre of the other version. Weird, dull colours as well.

Lifesong: This is probably the best version of Katsuragi yet. I would like to see Amiami Zero do the rest of the set.

Jel: While technically this has a nicer sculpt on the finer details, I think I prefer the brighter colors and more cartoonish exaggeration of the Phat company version we featured a couple weeks back. It just looks more fun, which is appropriate for anything Senran related.

Timmy: I do kind of want to start collecting a Senran line of figures and I have been waiting to see what Amiami was coming up with before I made a decision. I must say I really like what I see, the pose is dynamic, energetic, and very Katsuragi and the face, like most of Amiami’s faces, looks great. Especially the eyes, I don’t know why but I really love the way Amiami does eyes. Cast off ability is an interesting feature but I would really like to see her come with a bikini top to replace the shirt, since one always magically pops up when she receives those clothes destroying attacks. Being 1/7th compared to Phat’s 1/8th line is also a consideration not to mention I am looking for a whole line and not a single figure so deciding which to go for, if any at all, is still quite the task. 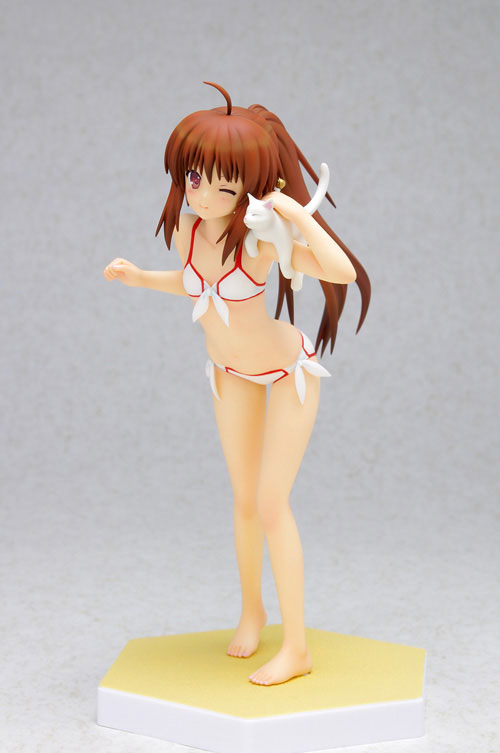 Zigg: Not especially impressive. Those big white bows look like she’s got a moth nestled between her breasts and while the pose and face are decent it’s overall a pretty bland figure. Nice cat though.

Lifesong: The kitty makes this beach queen stand out from the rest. The colors on the bikini fit Rin well. Rin’s shy personality is also wonderfully captured. If you collect beach queens this is one you shouldn’t miss I think.

Jel: If there’s anything I do appreciate about the Beach Queens line it’s how they try to add little details about the character to make them more unique. Adding a kitty was the perfect little touch for a Rin Beach Queen. Maybe they could have thrown in a baseball bat too, but I guess that would be overkill.

Timmy: I’ll admit to occasionally liking some of the Beach Queen’s figures featured here but this one is by far the closest I have come to buying one. Rin and that cat of hers are both bloody adorable. That expression of hers is great and I could easily see myself enjoying taking pics of her at the lake. There is also an exclusive version that comes with a second expression but I would say its hardly worth shelling out the extra cash. This cutie and her pussy are bound to tempt me in the coming months though so don’t be too surprised if I end up grabbing her.