It’s time for another round of Anime Shorts as we take a look at episode 9 of Aiura, Sparrow’s Hotel and Muromi-san. This week we have lessons in comic timing, an ode to the Otaku heart, and perverted ancient robot scientists.

Recap: The girls discuss their dreams, both short and long term.

Jel’s Thoughts: In this week’s lesson on subtle, time constrained comedy: the long pause. Saki and Yukon’s reaction to the completely not surprising revelation of KanaKana’s idol aspirations and the awkward moment when Wakatsuki-sensei claims she has no idea how to marry into money were classic examples. Was anyone else surprised marrying rich was Saki’s idea in the first place? I guess it makes sense with her lazy personality, but I didn’t see that coming.

Lifesong’s Thoughts: I am reminded of Azumanga’s dream episode. Even KanaKana’s mom thinks she is too dumb for a legitimate career. Wakatsuki-sensei’s reaction to the marrying into money question was great. It was probably just a reaction to a marriage question at all, but funny none the less.

Recap: An anime convention near the hotel means the staff encounters some unusual customers.

Jel’s Thoughts: Hey, this one was kind of entertaining! You would think the highlight of this episode would be Satou finally having her showdown with Billy, but instead it’s Misono who steals the show again with his beautiful, nearly poetic description of what drives a man to Otakudom. I also found it interesting it’s suggested he’s not actually an Otaku himself (as any self respecting otaku would know what “uke” and “seme” mean), despite so passionately defending the Anime convention-goers. I am a bit disappointed we don’t see the fight with Billy, but considering the show’s budget it’s probably for the best.

Lifesong’s Thoughts: I was actually amused by this episode. The world may be ending. Billy is the best thing about this anime. 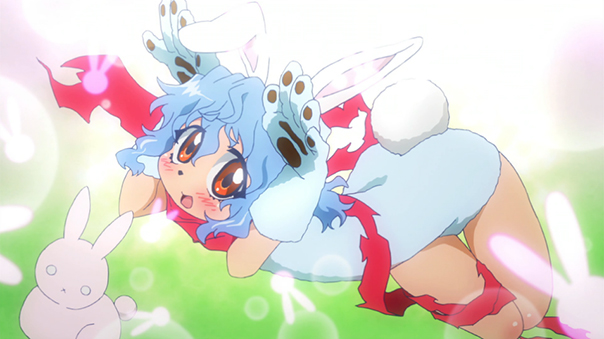 Recap: Takurou learns about the mysterious entity behind the mermaid’s super advanced technology. Muromi takes Yeti to this mysterious being to get a cell phone, but it may be more trouble than it’s worth.

Jel’s Thoughts: Well if we’re going to get that asteroid crashing down to Earth like in the OP, we now have everything in place to make it happen. Our perverted robot alien scientist guy has the technology and the motive (Levia-san destroyed his continent and/or his obsession with Yeti), and it would make sense that Yeti would have the little flyer explaining how to stop the asteroid.

Whether that ever does actually happen or not, this episode was pretty disturbing, in a bizarre, amusing sort of way. The idea of Muromi casually carrying around some kind of multi-dimensional storage device and seeing that, of all things, finally catch Takurou’s interest was a fun way to shake things up between them. The alien robot scientist thing lusting after the childlike Yeti and Harpy was so incredibly loathsome and over the top I couldn’t help but just laugh at it. Having the intentionally obnoxious Harpy spouting equally obnoxious internet terms was kind of the icing on the cake to a pretty funny episode overall.

Lifesong’s Thoughts: Who wouldn’t be fascinated by a bag of infinite holding? It seems we now have a villain or sorts? Maybe? Even if the worst thing he ever does is teach the harpy annoying slag it’s cool to have a somewhat antagonist character. I hope that we will get to see the things in the OP actually happen.

Marlin’s Thoughts: I was wondering what the robot would turn out to be in the end. From the way they showed him in the OP I could pretty easily guess he was an alien, but I didn’t even think about his personality. Considering there really isn’t a token pervert outside of Muromi’s attempts at flirting and a brief cucumber incident, I guess I shouldn’t’ve been surprised. The images got close to being a bit too far, but I think they enhanced the joke pretty well. Seeing Harpy be turned into a channer was probably the best joke in a while. With the entire ensemble cast finally assembled, will we finally see an overarching plot? Probably not, but new blood is never a bad thing, and with all these pieces I can feel safe that Muromi-san will continue to stay entertaining to the finish.