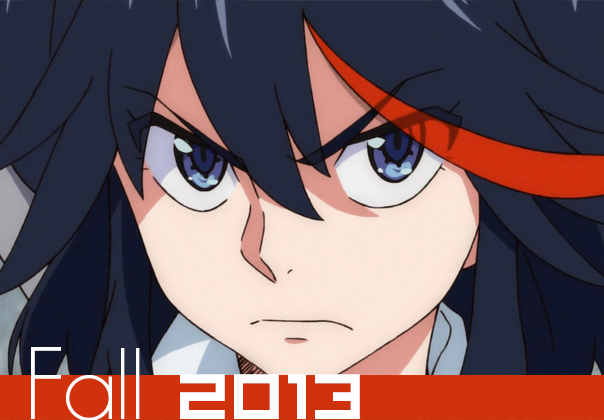 You may now rest easy, anime fans, as part 2 of our Fall 2013 Anime Guide has arrived! We have conveniently compiled the remaining shows we’ll be taking a look at for your perusal, and if you missed Part 1 make sure to go give that a look too. What shows are you excited to see? What do you think will be the biggest hits? the big failures? the hidden gems? Let us know what you think.

After the success of Little Witch Academia (and Inferno Cop?), Trigger intends to SAVE ANIME with their first full length series. The highly anticipated Kill La Kill stars a girl with half a scissor and a Gurren Lagann on her shirt fighting the oppressive regime that is her school’s student council. I love the timeless look and feel of the trailer, and I expect plenty of insane action and animation. It remains to be seen if the show can deliver more than that, but I’m really looking forward to checking it out. As a huge Trigger fan and an animator himself, Gee probably would have murdered me in my sleep if I didn’t let him cover this, so he’ll be all over this one.

I’m all for some sports anime every now and then, but at a glance this series has almost no discernible characteristics. It follows the story of a really talented pitcher and a really talented catcher as they aim to win THE CHAMPIONSHIP. The trailer doesn’t seem to offer up much in terms of originality either. Nevertheless, a little hot blooded baseball action will be enough to get Gee to watch an episode, so he will be covering this.

Wanna Be the Strongest In the World!

This story about a girl befriending a messenger of the gods seems to have a really gentle, relaxed vibe to it. I’m kind of afraid that means it will be boring, but it also could have potential for some heartwarming story lines. Not really sure where Gingitsune is headed, but Marlin will be giving it a look to find out.

Magi: The Kingdom of Magic

Despite a few issues here and there, a good portion of the Glorio crew enjoyed Magi’s first run and now the oddly Japanese re-imaginging of Aladdin and Alibaba are set to return. Presumably the new season will pick up their adventures from where we left off, but I imagine you already know what you’re getting into it at this point. Zigg handled the bulk of our original Magi coverage and will handle the second season as well.

And here we have yet more urban fantasy starring super powered teenagers! Yozakura Quartet has existed in several animated forms before, which Aquagaze can explain much better than I can. Some cool fights and characters coupled with art by Susuhito Yasuda (Durarara!!, Devil Survivor games) is enough to pique my interest, and apparently the new series will at least in some way tell the story from the beginning. So long as they don’t pull a Rozen Maiden and cram 2 seasons into 15 minutes, I’m cool with that. Aqua has been raving about this series for nearly as long as I’ve known him, so he’s the natural fit for our coverage.

Fighting dolls is so last season, do we really need another one of these shows? This particular series seems to be all about the combat as it centers on one boy entering a tournament to be the strongest puppeteer… or something. I don’t have very high hopes for Unbreakable Machine Doll but the trailer seems to have a lot of action and the character designs are kind of nice, so maybe it will be fun on a base level. I gave this show to Timmy based on solely on the fact he liked a figure of the main puppet girl, yes that is the kind of strict criteria we judge our anime on here at the Glorio Blog.

OK that trailer makes this show look really, really, really boring. Non Non Biyori is a slice of life series that follows a young girl as she transfers schools from the big city in tokyo to out in the country. I can dig a show with an easygoing vibe and the setting is a little different than your usual school anime, but they’re going to have to do something other than hang out in the middle of nowhere. To be fair, I had similar feelings about this season’s sensational sleeper hit Love Lab before it aired, so I’ll wait until I give it a look before passing judgement.

Gee has actually read this manga and to paraphrase what he told me there are big boats that fight and they have AI’s that take the form of cute girls. ANIME, ladies and gentlemen. I wouldn’t be too hopeful for much in the way of story, but the premise is pretty original and the large scale ship battles could be cool to watch. While normally handling the comedy and romance, we’re switching things up a bit and having Marlin take a look at this one.

As yet ANOTHER show about school kids with super powers, Tokyo Ravens is about a dude from a family with supernatural powers who, of course, has no powers of his own. Also as expected, he runs into his old childhood friend who is chosen to be the next head of the family. I don’t know why but I kind of have a good gut feeling about this series. I’d love to see some cool, innovative powers and the trailer seems to be pushing the romance angle quite a bit. Since I still can’t convince him to watch A Certain Magical Index (of which this show is giving me a similar vibe), we are enlisting Irothtin to give it a go.

At some point I was in the camp of Blazblue fans clamoring for an anime adaptation, but the more I think about it the more I have a feeling this is a baaaaad idea. It might be a fun romp should they do the smart thing and stay focused on the fighting and the production values are good enough, but I just have a hunch we are going to hung up on infodump after infodump as they try to explain Blazblue’s increasingly convoluted storyline. I’ll admit the trailer looks pretty solid, but I will need to be convinced that this is any good.

For better or worse, this season seems to be lacking in both comedies and light novel adaptations with stupid long titles. Enter Ore no blah blah blah, or what we are just calling “the one with the multiple choice thing”. The “multiple choice thing” is an affliction our hero has in which he sees a multiple choice quiz in his mind and whatever he chooses becomes reality. This being anime, he inevitably ends up summoning a cute girl, possibly girls. While this doesn’t look as particularly dire as some of the other weird comedy premises we’ve seen in the past, it doesn’t exactly look like it’s going to shatter the mold either. Still might be worth a laugh though, and Marlin will be checking it out.

As the first half of this season’s noitamina block, Galilei Donna brings an appropriately weird concept. In the not too distant future three sisters, descendants of Galileo Galilei, are on the run from the law and possibly trying to save the world from global warming? I have NO clue where they’re going with this, whether it will be a comedy or a drama or a thriller or something else entirely, and as anime original project no else really does either. Aqua is always up for a creative challenge, so we’ll be sending him to investigate.

Much like its noitomina block mate, there’s not too much info circulating about Samurai Flamenco. Inspired by tokusatsu shows, our main man decides to create a new real life super hero named “Samurai Flamenco”. Unfortunately, he doesn’t have any powers or authority, which which will no doubt get him in trouble. I’m picking up a pretty light hearted vibe here and I’d say I’m expecting more nostalgia and optimism than a deep, dark deconstruction of the hero thing. No one at the Glorio Blog has more experience with men in rubber suits than Zigg, so he’ll be giving this a look.

Despite looking like another typical shonen sports series, I already like the idea of Yowamushi Pedal. While other shows are telling you to play a lot of video games and you will get all the ladies, the otaku protagonist in this show is joining a competitive cycling team. As noted I am totally expecting this to be full of sports anime clichés though, so I can’t say I’m super enthusiastic about watching it. We’re giving Gee a break from all the sports anime this season and letting Iro check this out.

We saved the best for last! Megane-bu! is about a bunch of attractive dudes that really love glasses and form a club. I mean they really love glasses, to the point where it’s more than a little bit creepy. Much like this season’s Diabolik Lovers, perhaps even moreso, this clearly has no purpose beyond pleasing the Good Looking Guy market. Still, we must cover them all and Iro has bravely volunteered to do so. And by bravely volunteered, I mean I am forcing him to do it because, once again, I am a terrible person and I think it will be HILARIOUS.