Recap: Koko overhears a very unsettling conversation. Her reconciliation with Banri brings the Ghost to remember a similar time with Linda. After brooding for a while, he finally gets what he’s always wanted.

Poor Koko. The girl is fragile enough with her bruised ego and manic personality, now a ghost is making her boyfriend sound like he’s pining for another woman. It seems a little melodramatic that she missed multiple days of school over her fretting. Knowing how my friends have been after tough breakups though, I suppose I can let that slide. It’s not like her fears are unfounded, anyway. It’s best that she aired those feelings when she did instead of letting them well up inside her. A great part about the reconciliation scene is how they kiss with almost no aplomb. It isn’t even the focus once it happens, going immediately to ghost Banri and his reminiscing. Most romance stories make a kiss a major part, but these two are already in an established relationship, so it’s simply normal for them to do after making up.

Linda’s sidestory was way more serious than I was expecting from its start. Cheating is an unfortunate everyday fact of life, but it’s something we never want to have happen to family. Having a friend that was cheated on myself, I can’t understand the mindset of allowing her to continue seeing him. When that bond of trust is broken there is no going back. How could the two of them ever act normally around each other? Nothing came of the guy she was fooling around with being creepy after the confrontation, which was weird considering how much they focused on it. It all seems like bad news to me, but at least they acknowledge what a burden it is to bear for Linda. It makes it hurt that much more when we go back to the present and are reminded that he doesn’t even remember her brother exists. 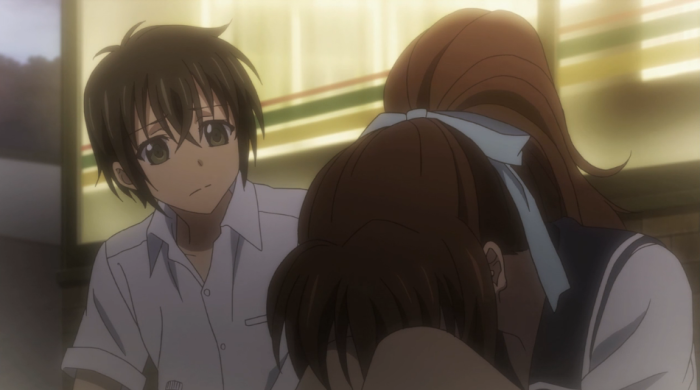 As the guy who has blogged both shows, I’d feel remiss if I didn’t draw a comparison to last year’s Natsuyuki Rendezvous. Granted, the stories aren’t perfect parallels, but now that we have come to this point, there’s definitely some similarities in this kind of ghost possession. It obviously will be a little different, Ryousuke and Atsuki were both pining for the same woman, so it’s not like there was the kind of conflict of interest that we see here. Now that the “Ghost” has returned and Banri is rid of his amnesia, will he discard Koko for what he believes is his real love? Whatever happens, things aren’t looking good.