Hello, and welcome to All Your Monies, where The Glorio Blog’s resident toy and figure collecting crew (and Aquagaze) will run down the last week’s new pre-orders, turning a loving or scathing eye over what’s been put out for you to spend your hard earned cash on. This week All Your Monies returns after a fortnight long absence!

Zigg: Before we begin this week there’s a little housekeeping to be done. AmiAmi has started getting really weird with prices and separation of its Japanese and English language stores. Therefore to keep things simple I’ve decided all links will now go to Hobby Search instead. I’ve also decided to start listing figures by their official price as opposed to including store discounts, since these always vary from retailer to retailer. That’s why the average price may seem to have gone up! 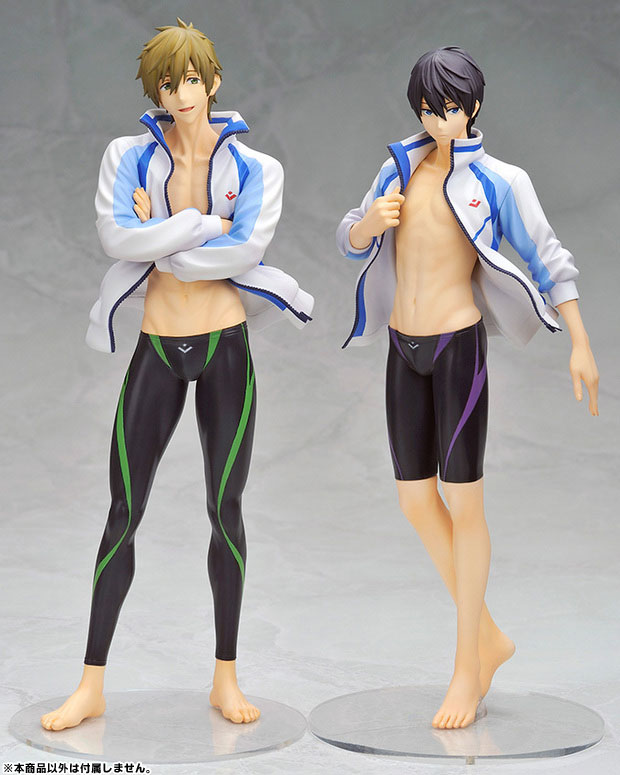 Jel: It seems like these have been in development forever but I guess they’ll make it just on the tail end of the show’s second season. It looks like the wait was worth it as Alter’s amazing handiwork translates well into rock hard six packs. Admittedly the poses are kind of boring, but the designs are unique enough that these will look fantastic as a set.

Timmy: Poses are slightly boring but otherwise these are a pretty good example of what Alter can put out on the guy figure front. Sexy dude figures are not really my thing but if they are yours I doubt you will be anywhere near dissapointed.

Chris: I’m not that familiar with Free!, but these seem to capture the blustery swimming pool theme pretty well. It’s a bit of a shame that the poses are rather boring, though I suppose I’m also not in the market for Speedo models on my bookshelf so it might be what fans of the show want?

Jel: This figure has a lot of nice things going for it, mostly because Amy’s design and color palette were already pretty great. Details like the wear on her belt and the feather on her bag are nice touches but two things jump out at me: 1. Megahouse proves once again they don’t know how breasts work and 2. I just can’t look past her foot. Is she stretching it? Is she playfully kicking you with it? Is she sitting on the ground and extending it toward you for some other purpose? I’m not sure what that says about me but regardless too much focus on the foot.

Timmy: Unfortunately Megahouse guaranteed disappointment for me the moment they announced her with a running airplane pose and didn’t deliver on it. She still turned out alright in the end and I do love how her paint job turned out, and she did end up being pretty cute, but I still would have preferred a different pose. Sitting on her ass isn’t something Amy is really known for after all.

Chris: I’m a little torn over this, as while I’d love to own an Amy figure, this one just isn’t doing it for me. That face looks like it’ll be the cause of recurring nightmares, and perhaps this is just because it’s been a while since I watched Gargantia, but I’m reasonably sure that Amy’s breasts weren’t that…pronounced in the anime. No thanks.

Jel: This is easily my least favorite of Shirow Miwa’s fantastic 7th Dragon 2020 designs to make it to figure form. I’m always game for his artistically dynamic proportions and unique way of interpreting hair, but there is just too much skin being displayed in a very odd way. I’m also not wild about the purple and orange color scheme. The sculpt is top notch Max Factory quality though and this would look fantastic in your collection as part of the entire line.

Timmy: These 7th Dragon 2020 designs are fantastic and Max Factory has naturally done a superb job adapting them into figures. Psychic turned out great, and there are all sorts of little details to appreciate. I am particular fond of the hair, the leopard print coat, and the pattern on her thigh high things. Definitely a great looking figure if you aren’t shy about all that skin and are willing to pay for it.

Chris: I’m not sure about the hair being made out of pencil shavings, but aside from that this figure seems to be doing its job. I also rather like the crazy wardrobe, but there’s just a little too much flesh on show for my liking. I’m sure there’ll be a good number of people who have already pre-ordered this, though.

Jel: This is a lovely rendition of Kat but there’s a few red flags popping up that worry me. The sculpt seems rough on close inspection, that base has got to go, and the company seems a bit unproven. Add on that super high price tag and this is a tough sell unless you’re a huge Gravity Rush fan.

Timmy: I kind of wish I had played the game so I would want to actually buy this instead of saying nice things, but I guess its the latter for now. I love the sense of motion going on here, and especially the wind blown cape and hair. Its all nice and dynamic and such. The paint and sculpt in general look nice, though the quality looks slighty subpar in some places in some of the closeups. I am not familiar with what type of quality standards Union Creative has, but at that price they better do a good job.

Chris: A reasonable representation of Kat, but I wish there was more to this stand. Assuming (if it matters) that her hair and scarf are being moved by gravity and not wind, it would so much more interesting to see her alongside skewed scenery. It doesn’t need to be anything fancy, but if she were floating above a slanted building, it would make this figure so much more impactful. In short, we should have had the Everybody’s Golf version of Kat.

Jel: I guess FREEing is swapping out bunny suits for poodle accessories? Somehow that’s even more degrading. I’ll admit they are cranking out some of the best quality 1/4 scale figures out there as Charlotte’s level of detail is pretty sharp for a figure that size, but that’s more a product of shallow competition than anything they might be doing right.

Timmy: Seems like Freeing had to change up their strategy after Kotobukiya did that amazingly cute bunny girl version of Charlotte, and while this isn’t a bad figure by any means it is just doesn’t really catch my interest. Face is cute and detail looks nice though so if it is striking your fancy then be my guest. Thats a lot of bloody money though, especially when that previously linked Kotobukiya figure is going for half that much in the aftermarket.