Hello, and welcome to All Your Monies, where The Glorio Blog’s resident toy and figure collecting crew will run down the last week’s new pre-orders, turning a loving or scathing eye over what’s been put out for you to spend your hard earned cash on. This week it’s Aniplex’s turn in the spotlight, as they bring both the divine and the awful.

Zigg: I really like this. Granted, it’s a very unexciting pose, but that does lend it a sort of calm grandeur, and the detailing and attention are spot on. That huge bouquet is an excellent touch, there’s just enough life in the dress to make it look real and the veil is a lovely extra, as is its ability to be removed. Sure, it’s expensive but an exclusive 1/7 scale is always going to be on the pricey side and I like it enough for that not to be a major objection.

Jel: I have to say that’s some really impressive technical work on the dress, particularly the veil, but sadly it’s wasted on a really boring, lifeless figure. I know it’s a wedding dress and it’s supposed to be all white and pure and what not but this might be too literal. Wedding figures in general are also kind of creepy when you think about it, add on the price tag and this is only for those insane Fate collectors out there. You know who you are.

Chris: I still don’t know if there’s a story-related reason for all of these Fate figures, but even if there was, it’s a little creepy to have her in full blown wedding garb, chilling out on your desk. Actually, that’s a bit of a lie, because I can definitely see some hilarious combinations with Revoltech Woody. 16,000 yen is a lot to ask, though.

Zigg: I’m sorry, but I just can’t get over the face. The outfit is fabulous, the quality undoubtedly excellent, but that face man. It combines the trademarked Love Live identikit look with a goofy wide-eyed expression of gormlessness. Pass.

Jel: I… really like this. They finally managed to overcome the incredibly boring designs and cold dead psycho killer eyes of the Love Live girls by putting her in a totally bonkers outfit and a really fun pose. I’m also really digging the cool green color scheme, it almost makes the figure soothing to look at. This might be the first line in a while from Alter that I could actually get behind.

Chris: This is quite a gorgeous figure. It’s visually striking, it makes use of colours that aren’t typically seen unless on Miku’s head, and has a great pose, too. Hopefully the base doesn’t disappoint. I would have liked to see something a bit more interesting going on with the face, as well as the odd gap that seems to be between her face and fringe (which doesn’t convincingly look like physics are at play based on the pose), but honestly, I’m nitpicking. I still feel pretty okay about not knowing a great deal about Love Live!, though.

Zigg: GSC seem to be putting less and less effort into each subsequent Racing Miku. This one is just a bikini with kneepads and a racing jacket. Er, not that that’s unattractive of course, but it doesn’t make for a particularly elaborate or interesting figma. The bike on the other hand is super rad and given its obvious play potential for other figmas or even Kamen Rider S.H. Figuarts it seems the obvious buy from these two.

Jel: Wait didn’t we JUST have one of these? I’m too lazy to even look up the difference but the previous one was better. This doesn’t seem like any thought was put into it beyond Miku in a bikini with a jacket and kneepads. Also, it’s kind of bugging me how her twintails are oddly asymmetrical. Pass.

Chris: There’s something about this pose that seems really off to me. I think it’s because she looks like she’s wearing underwear rather than crazy future gear, and that this is a pose I’d expect to see someone do on a sofa when they can’t be bothered to put clothes on. It’s hard to tell if that’s just the pose or the figma joints at play, but whatever, you’re not buying this for the Miku anyway. You want it for the sweet Mikucycle so that you can put your other figmas on it. We’re soon getting a Kazuma Kiryu figma, so wouldn’t seeing him ride this bike be a fantastic Sega tribute? 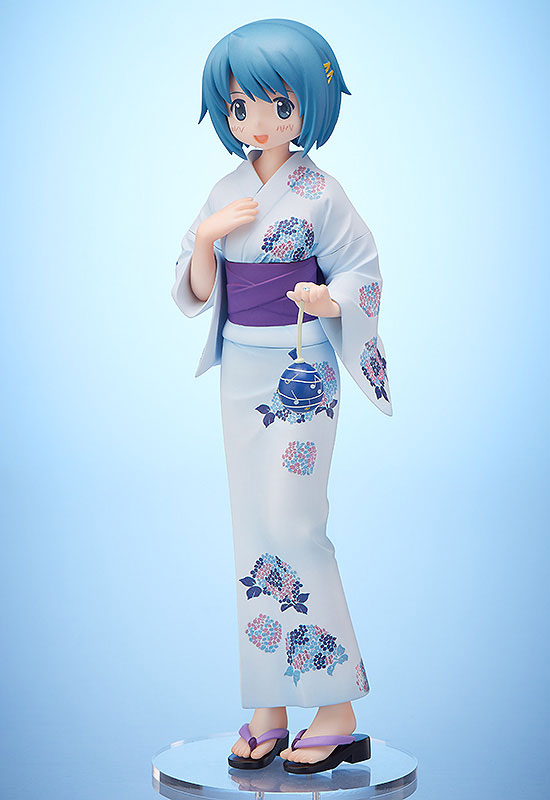 Zigg: I must say I like the very very pale blue contrasted with Sayaka’s hair. It’s also cool how only now that I’ve noticed each of the Madoka girls has a festival item that’s associated with them in some way – in this case the balloon with musical notes. Not a fantastic figure but if you’ve come this far you may as well close the loop.

Jel: YAAAWN… OK I do like the cool white color and her yukata design is marginally more interesting than some of the other girls in this line, but I continue to say go GSC’s version or go home.

Chris: I didn’t think it was possible for these yukata figures to get even more boring, but apparently it was. The face is dull and the pose looks like it had a few minutes of consideration, so how on earth they plan to charge nearly 10k yen for this is beyond me. Save your money. 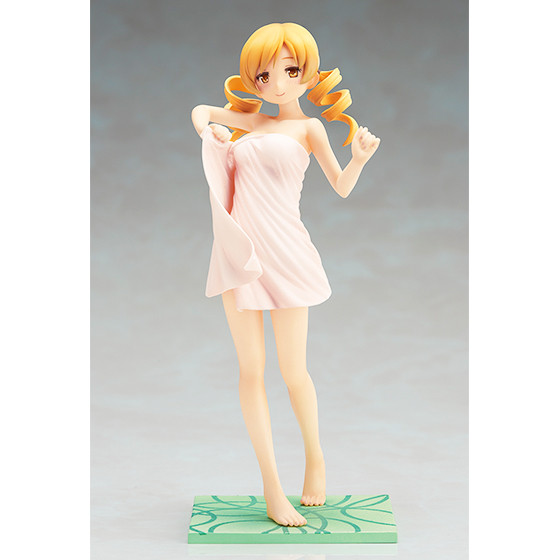 Jel: Come on guys, you’re not even trying now. They could have at least put some kind of design on the towel or something, but I guess that would make even less sense than the base design that has no connection to anything.

Chris: This is the new swimsuit/yukata figure line, isn’t it? Are we doomed to see every Madoka character in a towel until they decide on something else to recycle them with? Come on, at least make it interesting. Stick Madoka in a spacesuit and I’d probably buy that.