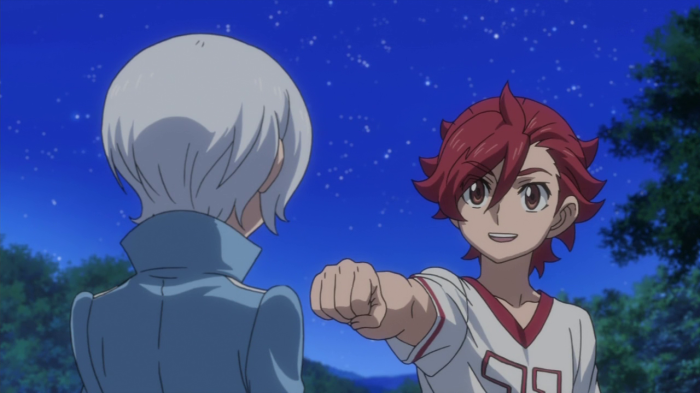 In preparation for the big finale, absolutely nothing of note happens.

This week, Gundam Build Fighters Try spends 22 minutes sucking Sekai’s dick and trying to convince us that there’s anything redeeming left to this show. Sunrise still seems to think that any of us care about their supposed rivals among the Gunpla Academy, but no amount of self-indulgent back patting is going to convince anyone that Wilfrid or Shia have any personality. Adou’s not much better, essentially boiling down to being a dickish brute, but that’s still more personality than Wilfrid or Shia combined. I genuinely laughed when Allan compared Wilfrid to Yuuki, as if anyone in their right mind could even begin to compare those two. Not saying Yuuki was a wellspring of personality and character development, but anyone who looks at Wilfrid and sees any of Sei and Reiji’s original rival in him is delusional.

Of course, we also get some pithy moments with our main characters too, which basically amounts to a whole ton of nothing. Fumina is basically a prop this episode and Yuuma works on some last minute upgrades to the team’s gunpla, which will probably result in some kind of ridiculous ass-pull out of nowhere. As for Sekai, we finally get a somewhat gratifying moment as he finally admits that he’s useless at gunpla and that all he’s done is use other people’s gunpla and bruteforced his way through with his own brand of martial arts bullshit. Unfortunately, it’s a matter of too little too late. Sekai should have been going through this character development 10 episodes ago, not in the episode before the final fight. It’s yet another example of how much Sunrise’s writers dropped the ball, or at worst, how little they care.

The greatest sin of all of course, is that this is the penultimate episode to the big final fight, yet doesn’t do anything with it. As all of you who watched the first season knows, episode 23 of Gundam Build Fighters was one of the finest episodes of the entire series. Using the premise of a huge festival as a backdrop for dozens of great cameos was one of the smartest and most enjoyable things that Sunrise did with the original. It was a genuine love letter to the Gundam franchise, and that episode could have only been written by people who genuinely cared about it. In contrast, Try’s episode is stark and devoid of that kind of energy. It’s a cliche pre-fight episode you could find in almost any bog standard kids show centered around a single-elimination tournament. Throw in all the stock footage that was used this week and it’s even more apparent how little anyone who’s working on this cares. It’s so disappointing that Try has come to this, especially considering how high my hopes were starting off. It remains to be seen if the show still has an ace in the hole saved for its big finale.