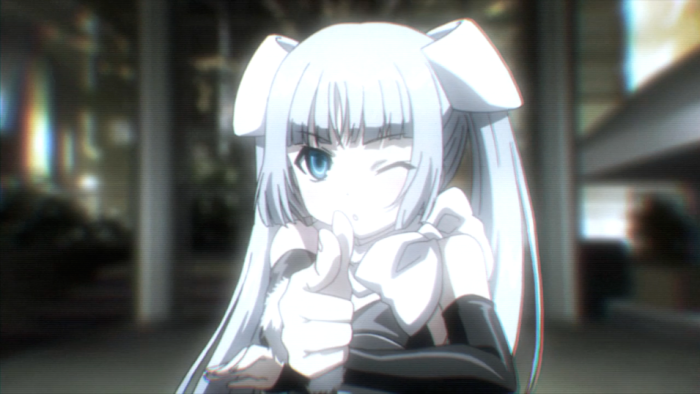 Shorts are comfy and easy to wear, especially in summer, so with the death of good anime this season, Jel and I are delving into the bizarre world of anime shorts once more to see if there’s another Tonari no Seki-kun or Miss Monochrome just waiting to be discovered. Well, there is another Miss Monochrome, but you know what I mean. Let’s just get this over with, shall we? 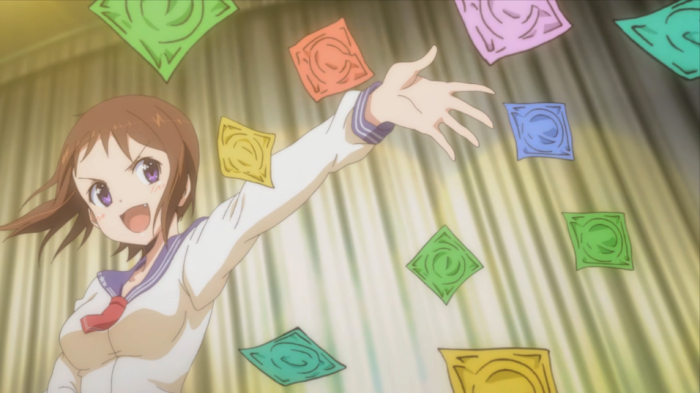 My Wife Is The Student Council President 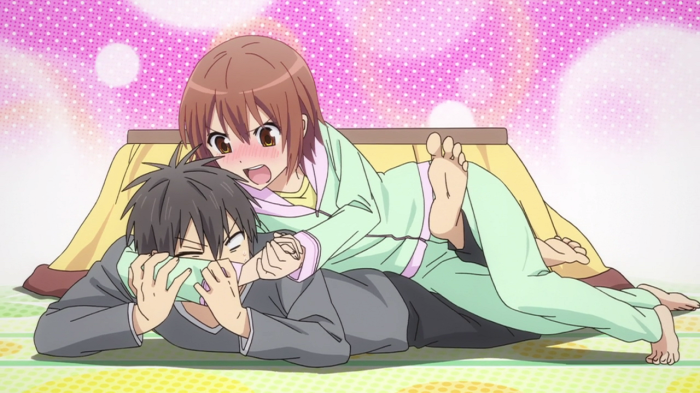 It’s Minami-ke, only with Chiaki spliced into two, Kana turned into a tsundere and the addition of a bland self-insert male protagonist. And bad.

I have to give Danchigai credit, at the very least it managed to cram multiple gags into its three-minute runtime. After this short opening episode, we already have a rough impression of what our main characters are like, and admittedly, the annoying twins and their tendency to make their brother’s life miserable do steal the show. Sadly enough, they are vastly overshadowed by middle sister Yayoi, a cringeworthy brat with a very obvious crush on her otherwise perfectly forgettable onii-chan no baka. Though ostensibly a show about an ‘average family’, Danchigai so quickly reveals itself as yet another ‘comedy’ about a milquetoast, mildly patronizing guy surrounded by wacky girls who show their affection in wacky ways. It’s basically a harem, only without the harem.

The only interesting thing in this episode was that the big sister seeing through the out of context statement about the guy and the middle sister sleeping with each other and giving a responsible answer to the little twins. Also, the girl with the purple hair looks suspiciously like Renge from Non Non Biyori, back pack and all. Go watch that, it’s actually a good show. This is not. Alternate Titles: That Facebook Group About Underground Idols I Got All The Info For Jukebox From: The Anime
Manga Adaptation by Asahi
Simulcast on Crunchyroll, Wednesdays 1:45am EST

As an obscure local idol unit struggles to break through, a shut-in blogger attempts to give them a much-needed popularity boost — putting her at odds with a group of loud otaku she doesn’t consider ‘true fans’.

Though ostensibly made in Microsoft PowerPoint – that CGI dance sequence will haunt my nightmares and after the halfway point, the show just stops being animated altogether – Million Doll actually has to be the best idol anime I’ve seen to date. In stead of whitewashing the industry’s many flaws in favour of a bunch of girls being insufferably nice to each other, Million Doll takes a look at idols from a fan’s perspective. Essentially, the show is about the conflict between a girl who supports an idol group for their passion, talent and hard work and a guy who seems to be mostly in it to get attention from cute girls. It’s an interesting conflict, actually. Sure, the loud, creepy, mostly male wota who yell all over concerts are annoying as hell, but on the other hand, our main blogger girl doesn’t really have any right to accuse people of not being ‘real fans’ when her admiration for the idol group – an obvious send-up of Negicco, by the way – is pretty much just as superficial. Unlike most other idol shows, Million Doll shows idol fame as it actually is, in stead of what it likes to pretend it is: a mostly thankless place dominated by fans with questionable motives and hard work for little pay-off, and not the quirky wonderland promised by The iDOLM@STER and its ilk. It looks and sounds like it was lifted straight from the garbage bin, but at least Million Doll has something to say.

Jel’s Verdict: This Is Spiritually Related to Miss Monochrome

Kind of interesting to do an idol story that’s just as much about the ins and outs of the fan base as the idols themselves, if not more so. The easy comparison to make is with Locodol’s attempt at a more behind the scenes look into the industry, but even that show had a very idealistic point of view. I’m not personally interested enough in how idols work, unless they happen to be immortal robots saving humanity of course, so I’m going to have to skip this one. 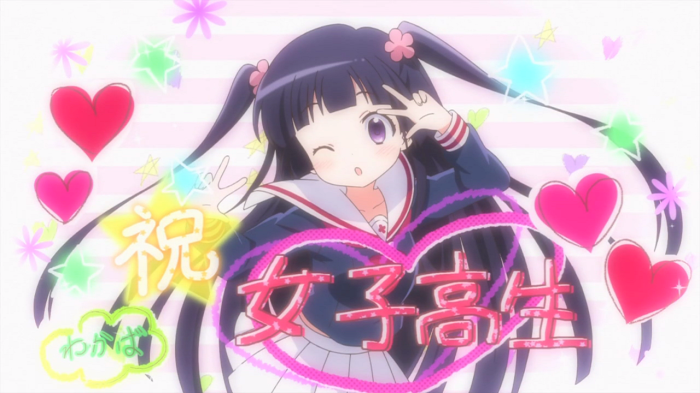 Wakaba is a rich heiress who nonetheless starts attending a regular high school. Obsessed with getting to lead the life of a normal high school girl, she quickly becomes friends with three other girls in her class.

Aqua’s Verdict: Brevity Is The Soul Of Moe

Look familiar? Yeah, in case the fact that it looks, sounds and is directed in the exact same way didn’t give it away, Wakaba Girl is based on a manga by the author of Kin-Iro Mosaic. Dedicated readers may know I have a bit of a soft spot for those four-high-school-girls-being-nice-to-each-other shows, but that show was so insufferably saccharine it seemed to exist on another plane of reality altogether. While Wakaba Girl provides more of the same, however, I was pleasantly surprised by how well it fit the shorts format. Eight minutes per week is the perfect runtime for shows like this — long enough to give the characters enough screen time to make viewers remember them, but not so long that their sparkly hand-holding starts to get on your nerves. It forces the show’s creators to make a selection of which material they want to work with in stead of padding out said material with worthless fluff, making Wakaba Girl a lot snappier and more tolerable than many shows of its ilk. Also, that OP is far catchier than it has any right to be.

Wasn’t the British thing the whole hook of Kin-Iro Mosaic? Take that away and it’s just four girls in a classroom, again. That said this was pretty cute, very well animated, and I agree with Aqua the shorter format makes it much more palatable. It’s pretty top notch “cute girls doing cute things” comedy – I mean there is a girl literally named “Moe-chan” – so if that’s your jam this is worth checking out. 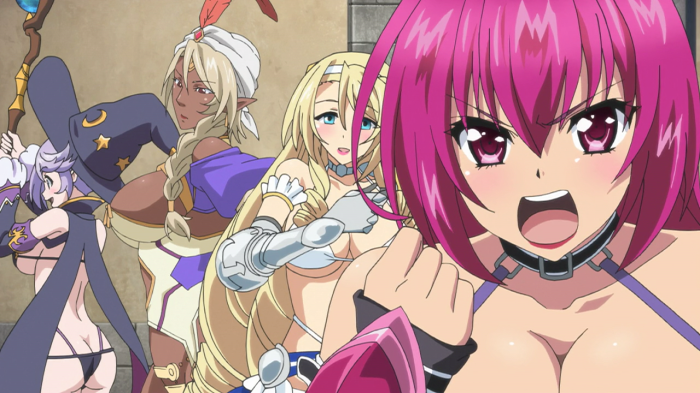 Four women adventurers — with no names because who needs those? — are unsatisfied with the bikini armour the local dealer has sold them. Asking for something more protective, they return to the shop to buy… bikini armour.

Dear people who made this atrocity,

P.S. Please animate more than one minute of footage for your next four-minute episode.

If I may attempt to say something deep in the context of a show called Bikini Warriors: I’m really worried we’re going to see more of these reactionary premises that try to thumb their nose at some of the legitimate criticism anime gets. I’ve been primarily thinking of this season’s Shimoneta decrying the imagined evils of CENSORSHIP, and it’s a little more obvious here. The “hey it’s armor because we said so!” angle seems like an OK joke on the surface, but it reflects a deeper attitude of defiance that I think we’re only going to see more of in the future. Also, this was gross. Avoid at all costs. 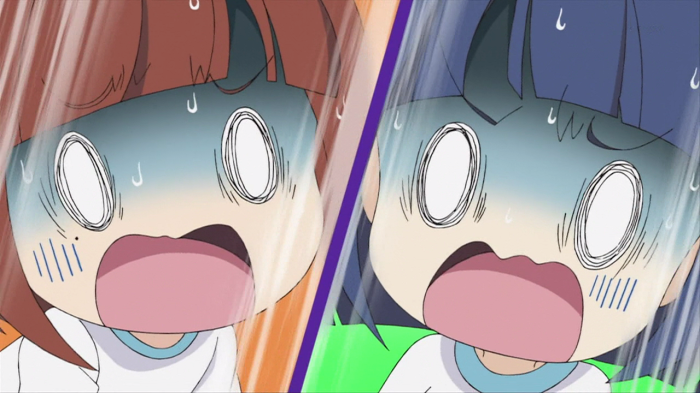 A three-minute anime adaptation of a radio show by two C-List voice actresses — okay, maybe one B-list voice actress and one C-list voice actress, then — doesn’t sound like anything much of a good time, but guess what… Suzakinishi is actually… kind of… okay? I basically expected this show to be little more than cheap animation to go with fragments of what I am sure is very interesting and undoubtedly hilarious chatter from the radio show, but in reality, this ‘adaptation’ has little to do with radio. It’s just a standard high school girl comedy. Playing themselves pretty much as the two characters I listed them as in the premise, Suzaki and Nishi have a pretty neat dynamic going on, and for a short, this comedy has some pretty solid pacing going on. The two introduce themselves in front of the class, play a ridiculously over-the-top tennis match and deal with an unwelcome spectator in just under four minutes and when Suzaki goes onto one of her melodramatic Mako rants, Suzakinishi comes dangerously close to being laugh-out-loud funny. I guess they really felt like they had to make up for sharing a season with My Wife Is The Student Council President, didn’t they?

This just barely brings enough jokes to elevate it over something strictly for the type of person that listens to anime voice actress radio shows. And no, Kana Hanazawa’s doesn’t count, that’s so mainstream. Having the ladies play themselves is kind of a fun angle although I have to wonder, is Aya Suzaki really that good at tennis? Maybe not. 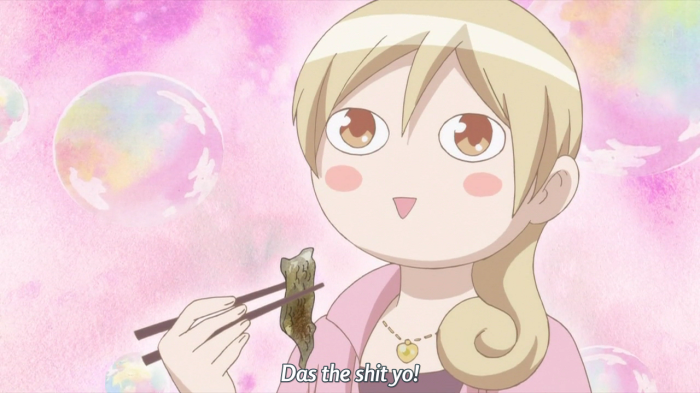 A woman goes to a bar to drink sake and eat salmon. Errm. That’s it.

Aqua’s Verdict: Made Me Hungry

I really have no idea what to say about it. It’s Miyuki Sawashiro. She goes to a bar. She eats salmon and drinks sake. Then some guys come in and they order the same, but with rice. She doesn’t like that. The end.

In America, when we want to do a show about getting food and drinks at dive bars, we send out some kind of former chef guy who is probably too old for his haircut in an attempt to appeal to the Foodie crowd. In Japan, apparently they prefer to send out an animated version of Miyuki Sawashiro. I might actually enjoy something like this if it was just a few minutes longer, but clocking in at 2 minutes with a 30 second OP is just not enough time to gain any traction. 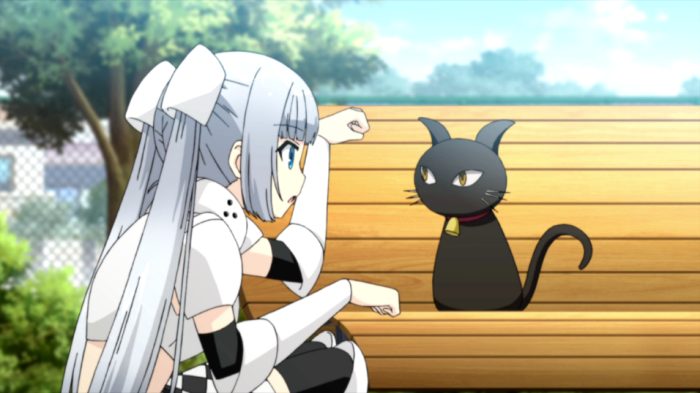 Miss Monochrome is eeking out a modestly successful idol career – she was so close to that Super ***** Wars gig! – but has a long way to go before she can surpass her arch rival. With Manager Maneo and an upgraded Ruu-chan in tow, she prepares to make her first album and set off on a tour of Japan.

Jel’s Verdict: This Is Miss Monochrome

Forget the weird, artsy social statements of Gatchaman Crowds or the cool, stylish action of Gangsta – this is your real #1 anime of the season. Everyone’s favorite immortal robot idol is back and better than ever, clocking in at double the episode length of season 1 and ready to resume her eternal rivalry with the ageless Kikuko. All the understated humor and charm is intact as well, and I’m loving the potential of a road trip tour across Japan. If subtle yet absurd comedy and gently cracking jokes at the idol industry sound fun to you, do yourself a favor and take the hour or so to watch season 1. Then come back and join me for season 2, which looks like to be just as charming as the original.

Marlin’s verdict: That CG Dance Model Will Haunt My Nightmares Once Again

Seriously, who in the world thinks that is anything but evil incarnate? Anyway, Miss Monochrome is another show that Jel managed to worm into my brain and marathon before the start of the season. You’re really not hurting yourself even if you end up not liking it, like trying out Inferno Cop, catching up on Miss Monochrome will barely take you an hour. After already seeing the second episode I’d say the comedy is well intact, with that blend of surprisingly good referential and misunderstanding comedy, there are certainly many, many worse ways you could be spending your time.