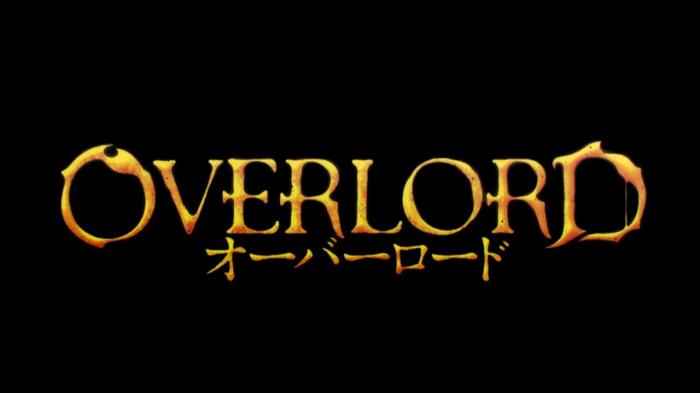 Yggdrasil was a once-popular DMMORPG, but the game will be shut down for good in less than two hours. Momonga, the leader of the game’s most successful clan, watches as the last member signs out, before taking a final walk around their castle.

It’s pretty easy to write off MMORPG-based anime as attempts at capturing the Sword Art Online crowd. We’ve seen this happen before with the surge of moeblob after K-On!, and while that was on a completely different level, there are things that can be said about the timing of Overlord‘s anime adaptation. But whatever, we’re judging the show, not the circumstances. Yggdrasil is the fictional online game that takes centre stage in this show; a self-proclaimed ‘DMMORPG’, with the D standing for Dive. Basically, Yggdrasil is a full-body VR MMO from the future, with players controlling their avatars the same way they’d move about in the real world, albeit with a few quirks and access to chat windows, toolbars and all those other goodies you might want when out on a raid.

The first five minutes feature janky, awful looking 3D skeletons and a party of heroes so stereotypical that they must have been copied from the script of a US crime drama, but shortly after that we get treated to an excellent premise for an anime. We see the game from the perspective of Momonga, a badass, not-3D skeleton guy and leader of the most successful clan in the game. He’s staring at a slime, another player and fellow member of his clan, and they just talk. It’s not even a conversation that’s particularly interesting, but the thought of a show that features MMO avatars around a table, reminiscing about the good old days really got me excited. Unfortunately, it was not meant to be and we soon move on to a more typical style of storytelling. 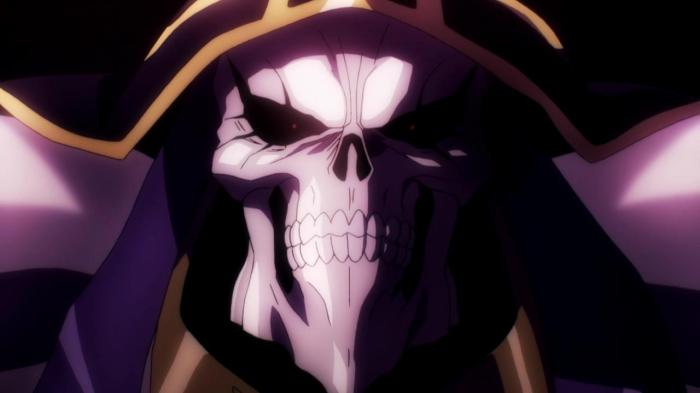 We see that Momonga is the last person from his clan still signed when the clock strikes midnight and the servers close for good. Except they don’t, and we quickly discover that he can’t seem to call any menus to quit the game. What’s more is that it’s not simply a case of being stuck in the game either, but rather the game seems to have got more intelligent and sophisticated. Characters that lacked animations now appear realistic in the way they move and talk, and Momonga makes a comment that he can even smell an NPC, a feature Yggdrasil doesn’t have. What’s really interesting about that statement is that he didn’t freak out about being able to smell an NPC, like an MMO that gives you an in-game sense of smell isn’t a far-fetched idea.

Momonga interacts with the NPC characters from the guild, and tests out in-game functions like chat and teleportation. It seems like he could be the only real-life person stuck there, but we also don’t know. It’s unlikely that Momonga was the only person logged in to watch the final moments of Yggdrasil, so this could become an interesting adventure story where we come across more and more trapped players. Walking across varying landscapes searching for other trapped players sounds like it could be fascinating, but my train of thought was soon lost around the time Momonga gropes the breasts of an NPC. It didn’t fit in with the rest of the show at all, and it’s done a great job of making me lose interest in the second episode when there’s otherwise a lot of potential for a great story. I’ll stick around for one more, but while the episode was pretty fun (breast grope aside), I have a feeling it’s not going to be the anime I want to see.

As much as the Trapped-In-An-MMO concept has become much reviled over the past few years, this show manages to start it out with a nice sense of melancholy. In a dying game, our main character is holding on to the memories of the good times he had playing it, and the friendships he made with people he will never see again. I think the beginning goes to show just how much a game about people playing an MMO might be more interesting. Instead of focusing on this wish fulfillment nonsense, it would be infinitely more interesting to how how the game lets people escape the stresses of their real lives, and how becoming too invested can just as easily hurt them. It also goes to show how bad these stories get once they really do get into the fantasy side. One minute into thinking “Hmm, I might be trapped in a fantasy world.” the main character gropes the girl he rewrote to love him, because of course he does. The rest of the episode is better, but that one scene ruins the entire show. Without it, one could actually think there was a decent story to be told here, but that one act shows the basal nature of this author’s intent, and ruins any possibility of me continuing onwards.