Ultraman kills a rare species of bird as onlookers cheer him on.

Giant monsters can be a problem for humans, I understand that much. Whether it’s monsters intent on eating all the metal they can get their hands on or giant dinosaurs obsessed with destroying generators, there’s usually a good reason why we deploy tanks, tech and other monsters to deal with them. I think that’s why the plot for this episode really rubs me the wrong way.

Birdon, a half-bird, half-testicle monster, has ventured out of its volcano to lay eggs, which can’t survive in a place that hot. Unfortunately, Birdon is a giant monster that doesn’t understand nor give a shit about humans, and so it builds a nest using things like electricity pylons, buses and… humans. The humans caught up in this mess are very much alive and panicking – we haven’t seen any reason why Birdon would be hostile – but Xio nonetheless need to go on a rescue mission. The solution, of course, is to murder the bird monster.

Xio successfully lured the monster away from its nest, and instead of keeping it occupied while they rescue the humans caught up in the nest, they decide to go all out on it. We get the usual soldier laser show, a jet fly-by (which results in destroying one of Birdon’s eggs) and a powered-up Ultraman wailing on a creature that would quite honestly just like to lay some goddamn eggs.

I understand that this is a show that revolves around the monster of the week, but I honestly would have liked to have seen Birdon do something that would justify pummelling it so hard it turns into a figurine. I know that it wouldn’t have been interesting to see them lure Birdon away while they rescue everyone, but damn it now I’m feeling bad for a rubber monster. In other news, the fact that the crazy Xio scientist is a monster is pretty cool, and the highlight of all the fighting definitely had to be Ultraman’s flying elbow. 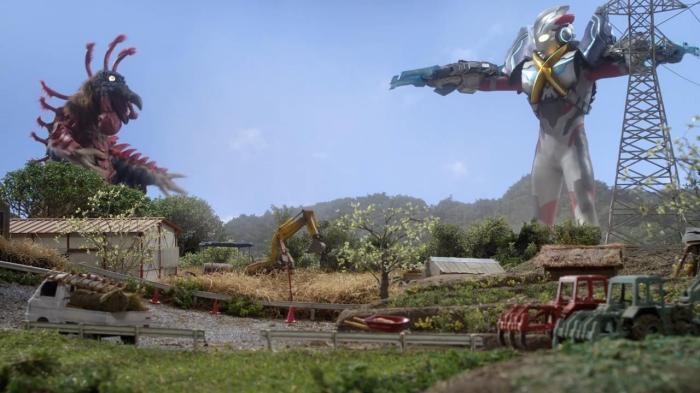 colons’ thoughts: they didn’t even try to kill the thing humanely

So yeah, as Euri says, in this week’s episode of Ultraman Ten, our intrepid heroes murder a nesting bird because that’s just What We’ve Always Done. I don’t know if previous Ultramans have been quite so cavalier with their low thresholds for justifying murder, but as a person who’s got zero context for this, I hope this series is planning to turn this around on us. I am, of course, not actually expecting them to, but I can’t imagine writing this stuff without realising on some level how comically evil Xio seems here.

I guess the Ultraman writers must have the monster of the week habit pretty ingrained, and it’s not like these creatures are native to Earth, so you can argue defence. Maybe I should be grateful that we get the little we do; late in the episode, someone makes a token reference to eventually bringing them back when it’s ‘safer.’ Clearly, then, someone on staff can see how Xio might seem morally dubious.

Unfortunately, while the gesture is appreciated, it’s functionally moot; there are only two ways this planet could become safer for this creature, and in both of them, nobody is going to be able or willing to turn these imprisoned creatures back into their real selves.

I love the smell of murder in the morning