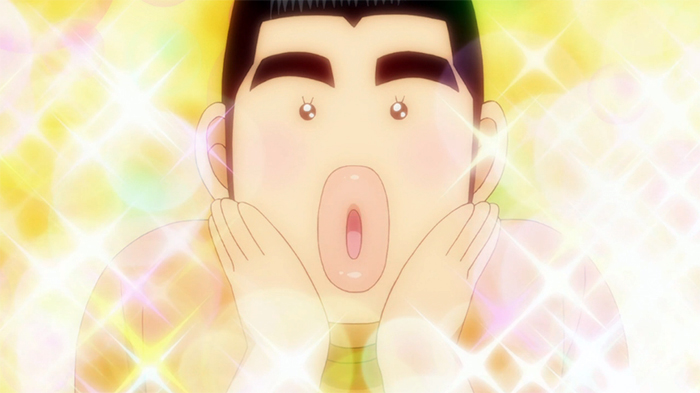 HEY GUYS AND GALS – Gatchaman Crowds Insight is really good, but also a solid week overall for the Late Edition. Every episode is at least decent, if not great, and perhaps most importantly My Love Story! returns to having the best header images.

Miss the Early Edition of the Roundup? Check it out here for our coverage of:
Chaos Dragon, Ushio and Tora, Miss Monochrome: The Animation 2, Classroom Crisis, School Live!, Prison School

Artemis: While not one of Durarara’s loudest or most spectacular episodes, this provided an important link to some events in previous episodes. The show’s habit of replaying the same timeframe from several different POVs is both a strength and a weakness – the former because it makes for a genuinely interesting and often quite unique watch, the latter because I think the viewing experience would be better as a binge-watch rather than on a week-by-week basis. This is especially becoming the case with the increase in cast members, some of whom are more compelling than others, although I’m happy to see Simon making something of a come-back this cour. Other than that, the main thing I got out of this episode is that Akabayashi is a total BAMF who I would absolutely never want to cross.

Marlin: Narita kinda has a bad reputation for having mentally unhinged people fall in love at the drop of a hat. I guess propriety is not what you should expect from dangerous mobsters, but Akabayashi at least seems to be one of the more high functioning psychotics rampaging across Ikebukuro, and even here we have a scene where someone almost gets murdered and then proclaims his undying love to his assailant. It also makes his relationship with Anri a little creepier, as it’s hard to tell if he cares for her because of her mom, or because she reminds him of her mom. 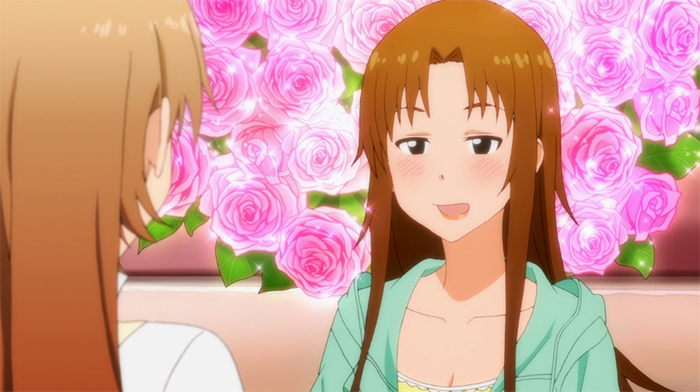 Working!!! – What kind of sick filth goes through that woman’s head

Artemis: I’m a little torn about this episode. On the one hand, Satou is one of my favourite characters, and while I’m pretty sure this is one relationship that will never make any real headway as far as the anime is concerned (well, does any relationship in this show?), I think he and Yachiyo would actually make a pretty cute couple. On the other hand, I’m sick to death of boob and panty jokes, which were never funny to begin with and are one of the major gags of the piece. As I’ve stated before, I’m not a big fan of Kozue either, although it’s easy to see why she was rolled out again this episode in all her drunken glory.

Jel: Wow that was some last episode material, and it’s only episode 3! Rui’s showdown with Rizumu was something you’d normally see late in the series, so I love that they are just cutting right to the chase. This show is crazy enough where I could see Rui’s faith in Rizumu being validated, making VAPE switch sides, and then Gel ends up being the true Final Boss. She’s apparently much more powerful than she appears and carries out the will of the people without a second thought. Interestingly, you can draw some parallels between her thought collecting ability and the election via mobile app we saw last week. The last thing we see before she takes action this week is a quick shot of some people on GALAX saying “what is the government doing?” as no one was helping Rui. Food for thought.

Marlin: I’m still not trusting Gel going into this episode. At any moment I expect her emotional reading powers to backfire, making people’s hidden desires become manifest in a way that people would never have wanted actually happen. This episode I thought Gel was going to straight up murder the VAPE leader considering how volatile the comments on GALAX were getting. Rui’s stand was a great bit of dialogue. I know there’s almost no chance they’d actually let this happen, but it would be pretty big if Rui actually died here. While he represented a lot of the good that the CROWDS stood for, his presence isn’t actually necessary to forward this plot of whether humans are ready to wield the CROWDS power. In fact, having its greatest proponent killed for the sake of his beliefs would send a powerful message for the tone of the rest of this series, and drive home just how serious the Gatchaman are going to have to take the VAPE threat.

Gatchaman Crowds Insight – Just runnin’ up the side of a building with some alien wind power, like we do

Artemis: This episode struck me as fairly average, probably because it felt mostly like setup for the big fight coming next week. As it’ll be the first to actually present a real challenge for Nic, I can understand the buildup, although as I also commented last week, I think this show is at its best in its more subdued and introspective moments. I’m not opposed to the gritty action scenes – unlike a lot of other shows, I think Gangsta has the necessary style to pull them off despite the lack of realism – but its biggest strength lies in its atmosphere rather than its bloody street brawls.

Artemis: This episode had less in the way of action as in the first two episodes, but Shirayuki continues to impress me with her inner strength and integrity, and it was good to see Zen consciously taking a step back this week and allowing her to resolve things in her own way. Both characters recognized that Shirayuki wanted and needed to confront issues under her own steam, partially in order to convince others that she was not taking advantage of Zen’s status, but also so that Shirayuki could prove to herself and Zen that she was capable of doing so. This strikes me as something of a rarity in shoujo romances, especially since it involved so little (if any) melodrama, so while this wasn’t an overly exciting episode, I do think it was a fairly important and impressive one.

Marlin: The “The World is Still Beautiful” parallels are as strong as ever this week, as Shirayuki shows she’s no pushover. I think it makes her even more admirable considering she doesn’t have vague wind powers to back her up on, only her knowledge and her confidence. I was also pleasantly surprised that anime manages to portray a noble vassal in a somewhat sympathetic way. We’ve been given Shirayuki’s side of this story the whole way through, but to any outsider it’s perfectly normal to be worried about a bewitching young girl cozying up to a high ranking noble, seemingly out of nowhere. By seeing her character firsthand, Shirayuki establishes her right to be involved with someone so important as the Prince. I’ve really been enjoying how natural the two act around each other as well. Zen is someone who obviously yearns to be treated normally, and in Shirayuki he’s found a strong woman who is willing to respect him but not kowtow to him because of his status. In turn, Zen is Shirayuki’s rock. Because of the kindness he’s shown her, she’s been able to make connections with many people and grow to love her newfound home. It’s always sweet to see an obvious romance, and unlike last season’s Yamada-kun I finally have a show I can laud for that without adding a “but”.

Artemis: I neither especially liked nor disliked this episode – it was perfectly nice as always, but nothing spectacular. I spent most of it relishing the backgrounds, because good lord this anime does them so well. Not just outdoor backgrounds either; the detail and accuracy of which more traditional Japanese houses are portrayed here is to die for. I also couldn’t help but realize that I quite like Renge as a character, even though very young and cute anime girls tend to either annoy or bore me. Renge works for me because despite her nonsensical phrases and nasally voice, she’s quite a perceptive girl and isn’t cutesy to the point of saccharine-sweet idiocy – probably helped by the fact that she never smiles or giggles despite her generally agreeable manner.

Marlin: Maybe it’s because it’s been so long since I’ve watched a good slice of life show, but I’m still enjoying this slow ride immensely. Renge is the best, and the shift to her as the main focal point lets them showcase her endearing character. She’s clearly a smart girl, and it shows not just in the fact that she’s the only one acing her tests, but also that she can realize her sister is kinda a lazy asshole. I’m sure planning a curriculum for five different grades is no picnic, but having so few students means there should be no reason she can’t give them the individual attention needed to learn properly. Oh well, at least watching her flounder around on her day off was pretty entertaining.

Jel: I complained last week about how making Takeo popular with girls was a bad look for this show, so watching this episode was weird. I swung back and forth between thinking I was going to eat my words, to having my thoughts validated, to then having my thoughts completely blown to pieces – in a good way! It took awhile to get there but I’m glad they are establishing that yes, guys and girls can be friends. Maybe I can just relate as I’ve been in Saijou’s exact position before and it basically played out like this episode. That said, I will now squeal like a Tumblr fan girl and get aboard the S.S. Suna x Saijou. Suna explained early on how he didn’t like any of the girls that asked him out because of how they mistreated Takeo. But now he’s found someone that can appreciate his bro? Come on Anime Karma gods, give these two crazy kids the happiness they deserve!