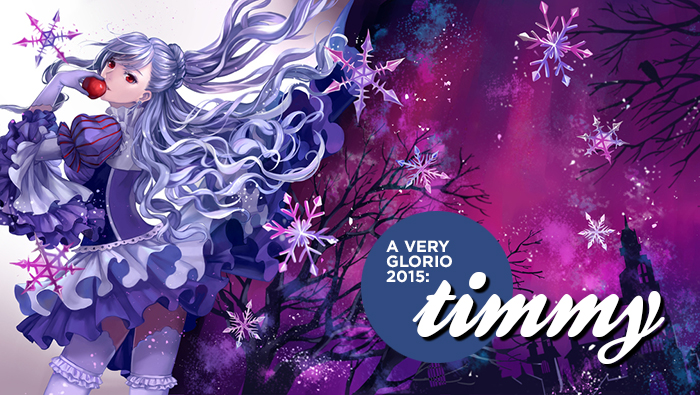 Quite a few interesting thing happened this year in the figure collecting world but easily one of the most exciting for me has been seeing a new company bring some new unique figures to the table. So this year I decided to do something different from my usual year end figure awards post and instead ended up arranging an interview with the company in question, Myethos. I hope you will all enjoy getting to know a bit more about them as I have.

If you don’t mind would you please give us a brief introduction of yourself and your company, Myethos.

Hello, I’m Light, the founder of Myethos. Our company was established in 2014. The operation office is in Hong Kong, and the factory is in Shenzhen. The process of figure making is complicated and time consuming, so we spent a year to prepare for launching our first piece of product. We managed to release it in 2015.

I am a big fan of figures and I have collected a lot of them myself. It is a pity that people like me sometimes can not own their favorite characters simply because they are not popular enough to be made into figures. I believe it happens with most collectors. Figure companies are keen to make figures for the popular characters, but there are also many less popular characters that are deeply loved by their fans. So I want to set up a company which doesn’t make figures judging by popularity.

The reason why we chose an original series (i.e FairyTale series) as a start is because our production capacity is not mature enough. We wanted to accumulate experience by producing something we can easily control with fewer uncertainties. 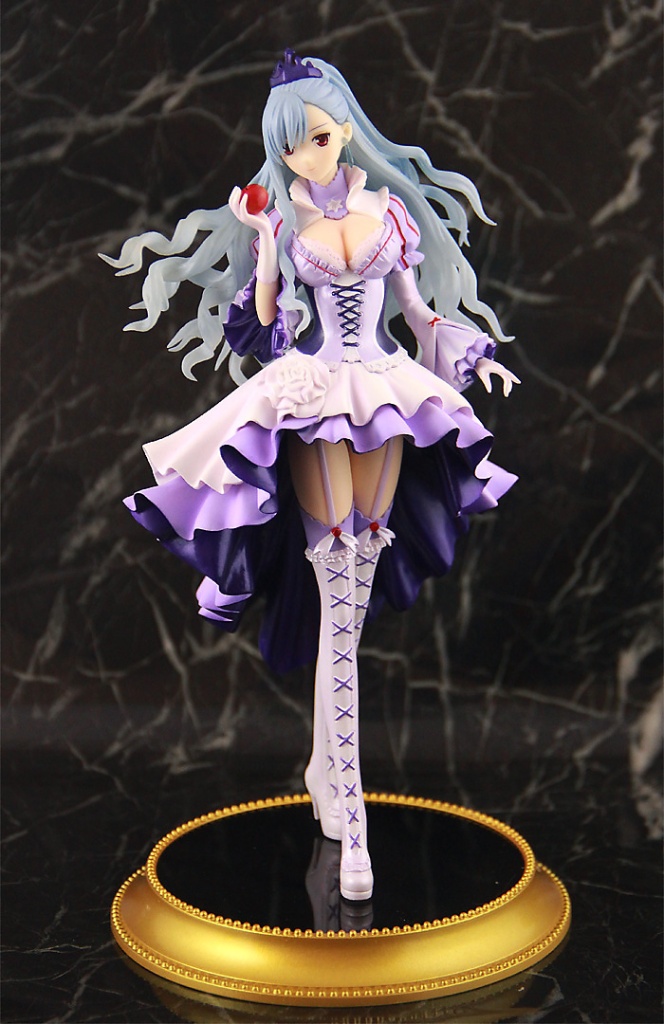 I personally found Snow White’s quality to be much better than I was expecting from a startup company. How difficult is it to produce a quality final product?

The factory is operated directly by ourselves. We can closely watch the manufacturing process so that it is easier for us to perform quality control better than some companies that do not have their own factory. But speaking of the manufacturing experience and technology, there is still a big gap between the products of those reputable figure companies and our current figures including Snow White. We are trying to improve the quality of our products to shorten the gap.

I think it is quite hard to manufacture high-quality figures. The toy industry requires a successful company to have not only earnestness and enthusiasm but also rich experience. The key for our improvement is trying more and working harder.

I also must say I like the design of the box. I am curious though why you chose a windowless design and one with no character art on it, both of which seem to be common with other figures. You also can’t see what the figure is without opening it. Are shelf visibility and bootlegs currently a concern for you?

The windowless design will definitely affect the sales at physical stores. But the windowless box is much more durable than ones with a window. As you may notice, our boxes are thicker than many other figure boxes. This is to make sure that the figure itself could be better protected. The design idea of making the box as an old book of fairy tales is that they are the characters walking out from those familiar fairy tales. I admit that there are some shortcomings in the design, so we will work on it in the future.

As for the bootlegs, it is not our concern at present because our products are mostly known within a relatively small circle of collectors. I haven’t found any pirated yet. 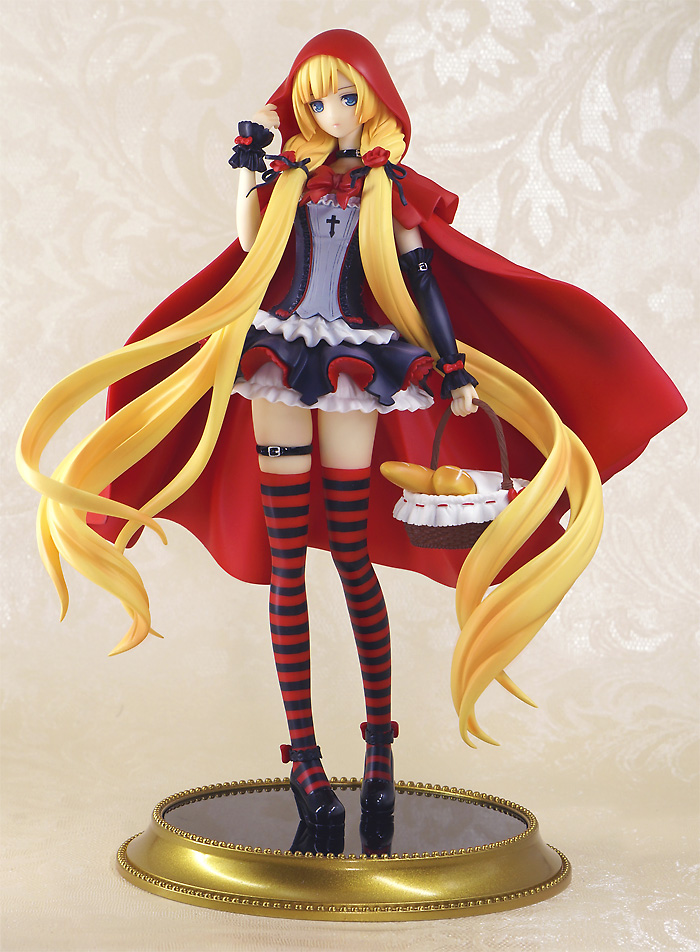 After we gained experience by manufacturing Snow White, we made progress on the molding and painting process. For example, some design details of Snow White were missing on the final product, so we paid more attention to the molding task till the mold satisfied the requirement. If you put these two girls together, you will find the quality of Little Red Riding Hood is improved compared with Snow White. Currently we have not experienced enough to make the manufacturing process easier and we also encountered lots of new problems during manufacturing Little Red Riding Hood, but I believe our future products will be more satisfying.

I will note that your latest figures, Alice and Queen of Hearts, both seem to have much more ambitious and dynamic poses when compared to your first pair. Can you explain why you made this change? Have you noticed any positive or negative effects from justifiably asking more money for Alice compared to your previous releases?

After having the previous two products released, we expect a breakthrough on the design. In the long run, we cannot come to a standstill. In addition, we want to feature the completeness of the story instead of just making a single character. This is why we decided to make several characters from the same fairy tale.

The rise in price of Alice and Queen of Hearts is due to some inevitable higher costs as we make more effort to ensure a better quality. We indeed feel the pressure, but at the same time we are very glad and honored that more people get to know and appreciate our products. 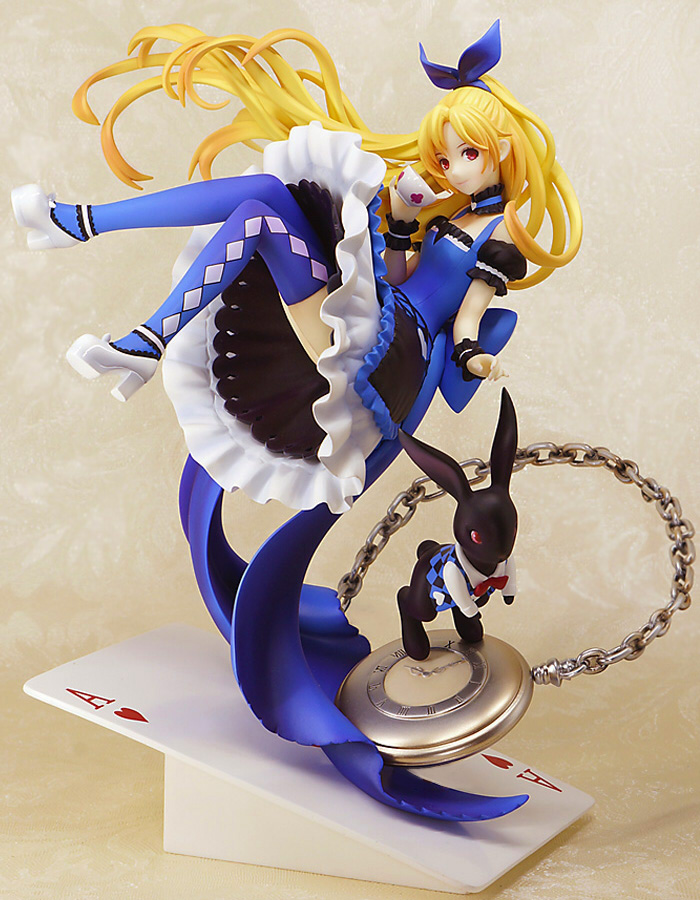 FairyTale -Another- Alice. Scheduled for release in January, 2016.

I noticed the change of illustrator between your first pair and second pair of figures. Why did you decide to switch from Monogo to Ask, and is Riding Hood the last of Monogo’s works that we will see produced by you? I also don’t see any sculptor credits listed for any of these figures. Who are the sculptors behind each of these figures?

We intended to have a good start so we appointed our own staff, Monogo, to design our first two characters. Because we are at the very beginning of our business, we needed a process of testing to see what is the feasible way of carrying out a designing plan. Using our own staff would allow us to make frequent adjustments to the character design depending on the capability of our manufacturing technology. It was more doable and convenient to communicate with Monogo to achieve that goal. After the design phase got on the right track, we found Ask expecting something new for our figures. As an Alice fan herself, her design is perfect for this series.

In the future, we plan to invite a variety of illustrators for different stories. We will choose the most suitable candidate for the characters. We hope they can bring fresh ideas to the character design and make our original characters with diverse styles. If Monogo is an ideal candidate in the future, we would certainly invite her to illustrate the design again. So Red Riding Hood may not be the last piece from Monogo. 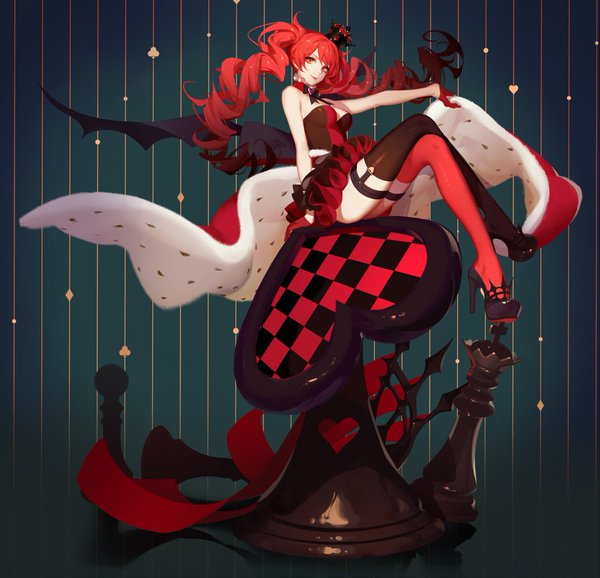 Ask’s Artwork for FairyTale -Another- Queen of Hearts, which the upcoming figure is based on.

You have recently made a surprise announcement that you will be making a figure of Nia Teppelin from Tengen Toppa Gurren Lagann. Why did you decided to make a figure of her and of one in her wedding dress? What differences and difficulties have you encountered so far in producing a licensed character compared to your previous original characters?

Firstly, I am a huge fan of Tengen Toppa Gurren Lagann, and Nia is my favorite character. The last scene in the anime is very impressive and I truly want to rebuild that wonderful moment. This is why we chose Nia in wedding dress to be our first licensed character.

Because I am sure the fans of the show are wondering. Is there any chance of us seeing a Simon figure to go with her? Are you considering doing any male figures in general in the future?

Since we want to rebuild the impressive picture of the final scene, we definitely would like to make Simon if the proprietor grants us the license.

If there are good designs and the appropriate chance for introducing male characters, we would be glad to release male figures.

What plans do you have for Myethos in the future? Do you have any new figure announcements or any figure updates that you would like to share with us?

Recently, we are focused on improving our manufacturing capability and technology. We will keep making new figures for our original series. In the plan, the next original character will be the White Rabbit in the Alice series. We also have some other licensed characters under application. Once the application is approved, we will release the announcements on our twitter or Weibo.

Is there anything else you would like to say?

We really appreciate this opportunity given to us by The Glorio Blog to introduce us to more English speaking collectors. We are grateful for your support of our products even if they are not perfect yet. We will try our best to present better figures in the future. If you have any questions or advice, please feel free to contact us and help us do better! 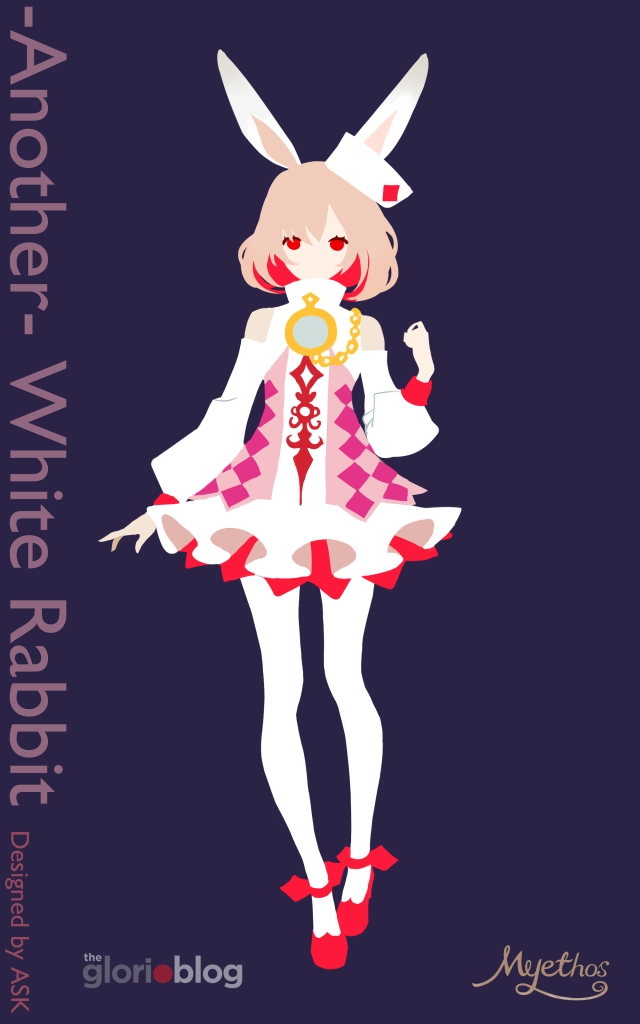 Initial character design for FairyTale -Another- White Rabbit. Pose and finer details are still pending, though I am told she will have an integrated base similar to Alice and Queen of Hearts.

I would like to thank Mr. Light for graciously taking the time to answer my questions. I wish him and his company the very best and I look forward to seeing the amazing figures they have planned for the future. If you would like to contact them you can find contact information on their website and if you want to stay informed on any company news be sure to follow their twitter and weibo accounts.

The beautiful illustrations accompanying this interview were created by Monogo and Ask. If you enjoy their work be sure to let them know.

One thought on “A Very GLORIO 2015: Timmy’s Myethos Interview”