And so another GLORIO year comes to a close and we’ve reached the moment everyone has been waiting for: our picks the best shows of 2015. As always, our annual list is created by taking votes from each of our writers and mathematically determining which shows are best. Clearly it’s a definitive and infallible method, do not try to argue with us. Joking aside, this is possibly our best year for the Top 10 yet, covering a lot of great shows worth watching. Read on and see for yourself, and let us know about your favorites of the year.

Timmy: Continuing the trend put in place before me makes me obligated to first stress that if you haven’t already done so and don’t know anything about the show you really should go watch at least the first episode, and even if you are spoiled the show is still worth your time. School-Live! was quite a refreshing take on the zombie survival genre as this gaggle of girls struggle to cling to whatever bits and pieces of their previous lives they have left as the world crumbles around them. The mental strain on these characters is showcased and handled well, and the show definitely doesn’t hold back when it starts throwing it’s punches. The thought and effort put into the premise and setting was also really enjoyable. For instance School-Live! features a rather unique zombie hoard that both seems to have come about from a biological attack, and actually exhibits some basic behaviors to indicate that some memories of the zombies’ prezombified lives remain. It is enough for the viewer to ponder if all these zombies the girls have been killing all this time could have instead been saved, and is a notion quickly crushed by possibly the saddest anime death of all time. Unfortunately there are a couple episodes that hold this show back from becoming something truly amazing, but it is still a very easy recommendation to make.

Check out our thoughts on School-Live! from the Summer 2015 Roundup. 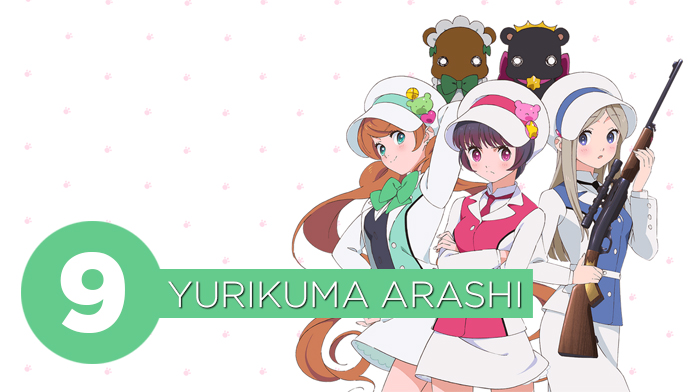 colons: I haven’t seen Penguindrum, so I didn’t really know what to expect in Ikuhara’s latest. What I had absorbed of what people had said about Penguindrum led me to some vague idea that there would be lots of pretence and convoluted symbolism. Yurikuma does not fail to deliver on that, and for the first three episodes or so there appeared to be little else; it was pretty, but appeared to be too far up its own arse to be enjoyable beyond its aesthetics. I stayed with it through this, though, because its aesthetics alone were enough to keep my interest. After the first three episodes, though, something changes, and Yurikuma becomes a simple, relatable, and surprising story about love and sacrifice. The pretence and symbolism does not go away, but it is in service of a plot that is engaging and completely coherent. And good!

Check out our thoughts on Yurikuma Arashi from the Winter 2015 Roundup. 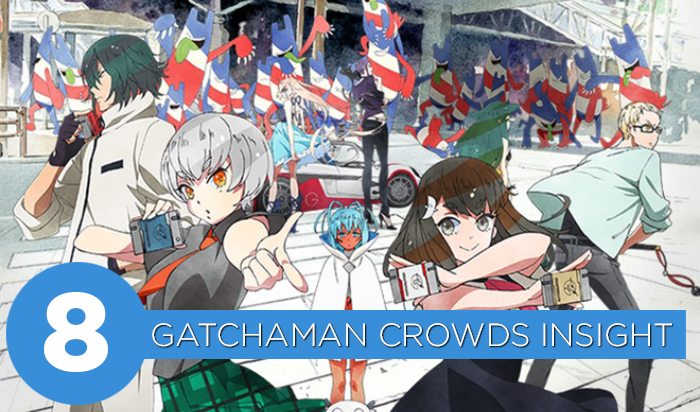 Marlin: Insight was everything you would hope out of a sequel. It was a show that took all the rich philosophical and sociological themes of the first series and expanded on them in a completely new direction. In the beginning you could be forgiven for thinking Insight was insulting the entire democratic process. VAPE (still the greatest villain organization name ever) makes a bold argument for the danger of giving too much power to the masses. Instead, Insight really digs into the reasons why mob mentality can arise, and its devastating effects. The rise of Gelsadara as a dictator is emblematic of the shallow human desire to be free of responsibility. The atmosphere that builds around his movement ignores critical thought in exchange for comfort and empathetic appeals. It’s after all of the inherent problems of this system come to a head that we see this is not some mere fiction. Listening to a Japanese product, in an age where even Americans are justifying the actions of Japan in WWII, use its narrative to give a stark indictment of the mentality of Imperial Japan was chilling, and hammered home the real danger of a society that does not value individuality or criticism. As always, the Gatchaman’s true victory is never against some external foe, but a moral victory against Japan’s baser tendencies.

Check out our thoughts on Gatchaman Crowds Insight from the Summer 2015 Roundup.

Zigg: JoJo keeps appearing on our end of year lists and there’s only one real explanation for that – it’s simply fantastic fun. Given the chance to take on the most famous and iconic chapter of Araki’s legendary tale, David Production’s love of the source material shone through at every moment and made for a rip-roaring ride across Asia. With a wider array of settings and villains that the first series, the show was able to get wilder and wackier and delve deeper into the bizarreness of its name, while at the same time cunningly finding new ways to bring villains and monsters to bear against our lovable heroes. From the ports of Singapore to the mountains of India, from the Sahara desert to the final, legendary showdown with DIO in the streets of Cairo, this was an adventure that was never less than exhilarating to tag along with.

Iro: Considering recent years, I thought anime-style urban fantasies were on their way out, but Nightow’s (and director Rie Matsumoto’s) undeniable style breathed new life into the subgenre with Blood Blockade Battlefront. Libra’s crew of amazingly-named eccentrics are endearing, awesome, and hilarious in equal measure, including everyman protagonist Leonardo Watch. Anime main characters tend to either be unstoppable badasses or completely spineless wimps, but Leo was somewhere in the middle, an audience surrogate who felt like a regular guy trying to make his way in the chaos of monster-filled NYC. If you like superpowers, modern settings, and shows oozing with style, go watch Blood Blockade Battlefront. Even with the ending’s production troubles, it’s the best urban fantasy anime since Baccano!, and some of the most fun I’ve had all year.

Check out our full coverage of (most of) Blood Blockade Battlefront.

Euri: If nothing else, One Punch Man is a masterclass in animation. It’d have to be, really, given we know the outcomes of each fight due to our protagonist being a guy who can defeat his enemies with one punch. That’s what you see when you simmer this show down, but it’s also so much more than that. All of the heroes are great fun, and a lot of effort has been put into the enemy designs even though Saitama regularly makes short work of them. There are also story arcs which steer away from the typical shounen formula that would see him fight a few grunts before a showdown with the big boss, instead focusing purely on character development and comedy. It’s not uncommon for anime to try and mix-up the genre they fall in, but not since Hunter x Hunter have I seen a shake-up like this. Which means I’m pretty happy that a lot of people are making One Punch Man their first anime, especially when you hear people have been starting out with shows like Attack on Titan and Sword Art Online. It’s great to know that this time, it’s a show that stays good from start to finish.

Check out our full coverage of (most of) One Punch Man.

Aqua: Gaaaa-rooooooooooooo! The Carved Seal of Flames might have had a bit of its thunder stolen by Mappa’s own Rage of Bahamut: Genesis last year, but once it continued into 2015, this animated adaptation of the cult tokusatsu series really came into its own, netting it the fourth spot on our list. Both an action-packed sword-and-sorcery adventure and a compelling character piece, Garo marries the over-the-top action of anime with the gravity of a good fantasy novel and the aesthetic of a heavy metal album cover. This should by all means make it the most unforgivably nerdy thing in the whole wide world, but luckily, veteran toku scribe Yasuko Kobayashi has managed to provide this animated spin-off with the nuance its live-action big brother somewhat lacks. Toning down its ‘dark and mature’ tropes with some idealistic wisdom, The Carved Seal of Flames is a heroic journey for the twenty-first century, exploring the compelling, nuanced relationship between a brooding, vindictive edgelord, his womanizing, swashbuckling father, and his boy scout cousin in an pandaemonium of rocking sound and oedipal fury, where the last five decades have somehow blended into a single, eternally resounding ‘hell yeah’. It will make you laugh, it will make you cry, it will make you raise your fists up high, but don’t let it make you wish for more, because you won’t be getting what you’re looking for.

Check out our full final thoughts on Garo: The Carved Seal of Flames here.

Artemis: I think the biggest compliment I can pay Death Parade is that it manages to pull off so many things that in most other shows would never have fit together. It’s dark and creepy at times, but simultaneously energetic and even playful. It’s often gleefully melodramatic, but the ending is one of the quietest and most subtle I’ve seen from any anime in years. It doesn’t strike me as being a particularly clever series, but it somehow showcases a handful of the most emotionally raw moments of any show of 2015. Perhaps the best word to sum up the show for me would be ‘unexpected’, because Death Parade almost always kept me guessing yet almost never left me lacking, all the way from its wonderfully inappropriate OP to the bittersweet conclusion. I didn’t anticipate such a compelling psychological drama, especially from a largely episodic series like this, but I got one anyway – and with a healthy dose of style and flair to boot.

Check out our full final thoughts on Death Parade here.

Jel: There are plenty of stories about finding your passion in life, but not many as good as Sound! Euphonium. It starts like any other Kyoto Animation production with gorgeously animated cute girls doing cute things, but as main heroine Kumiko sharpens her focus on playing Euphonium the tone changes drastically – funny how a love of music and a pretty girl will do that to you. The show matures into a drama that can range from subtle to intense, with each character digging deep within themselves to see if they have what it takes to be great. You could make a case for it being the best thing KyoAni has ever done, both story wise and in sheer technical beauty, and it’s definitely one of the best shows of the year.

Check out our full final thoughts on Sound! Euphonium here.

Gee: As someone with dreams of working in the creative industry, Shirobako spoke to me on a level that almost no other piece of fiction ever has. As I spend my days training for an increasingly hostile and competitive field, I often find myself asking, “why do I even bother?” As a result, Shirobako has become even more salient to me than ever. Funny, earnest, and surprisingly frank in its depiction of the Japanese animation industry, Shirobako is slice of life anime at its finest. Not only is it a heartfelt love letter to the craft, from its humble origins to its current state, it’s a story about the lives of the people who bring us our entertainment while never making excuses for its many failings. Instead it merely asks us to understand and acknowledge the people who spend so many hours and make so many sacrifices for something so seemingly trivial. Shirobako should be required watching for anime fans and for that reason, our anime of 2015.

Check out our full final thoughts on Shirobako here.