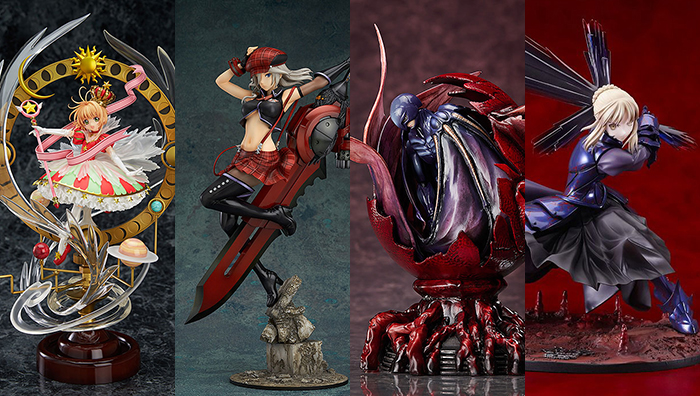 Hello, and welcome to All Your Monies, where The Glorio Blog’s resident toy and figure collecting crew (and Iro) will run down the last week’s new pre-orders, turning a loving or scathing all-seeing eye over what’s been put out for you to spend your hard-earned cash on. After a few weeks iff, AYM returns headlined by one of this year’s biggest and most eagerly anticipated figures

Zigg: Tremendously extravagant and utterly ridiculous, this is the sort of gigantic centrepiece figure that only comes along once every couple of years. GSC have a good reputation for delivering when it comes to showpiece figures like this, and the design is a really good effort at recreating CLAMP’s infamous flowery art style. There’s a cheaper version available that’s just Sakura herself, but could you live with the shame of being second best? I couldn’t, which is why I ordered this thing even at that absolutely ludicrous price. I can’t wait to see the shipping fee.

Jel: Of all the recent CCS figures (and there’s been quite a few) this is easily the best one. That base is ridiculously over the top in all the right ways. I particularly like how they embrace the stands for the planets and paint them gold rather than just pretending they don’t exist. Sakura herself looks amazing, with the detail work on her crown and the frills of her dress really standing out. Of course it is REALLY expensive, but I’m pretty sure Zigg will buy this and you probably should too.

Iro: This seems, uh… highly extravagant. That crazy planetarium base seems… well, crazy, and there’s a ton of little details seemingly everywhere. I’m sure Zigg is all over this one.

Timmy: This is one of those figures that speaks for itself with the amazing detail work crafted into every bit of this huge piece. GSC loves to go big and they certainly didn’t disappoint in the slightest. Its a great, albeit very expensive package, but I feel the cost is justified.

Zigg: I’ve never really understood why God Eater seems to have such a grip on the otaku zeitgeist, but I suspect it may well have a lot to do with this lady. We’ve seen figures of Alisa before, but at this point if GSC makes a scale it’s pretty much destined to be the definitive version, and so it appears here. The pose is great, incorporating the gigantic sword in a way which looks cool but doesn’t make the figure a million metres wide, and there’s a lot of typically well crafted detail, such as the stretched out suspender strap. Alisa’s design actually does a relatively good job of being sexy without being utterly crass, and overall the result is a striking, finely put together figure.

Jel: We’ve seen this character before and I think this might be my favorite pose of them all. It looks like some actual thought went into how your eyes follow it and it’s not just “here’s a girl with a giant sword”. The base and the sword look great, as does most of Alisa’s outfit. The only thing that’s bugging me is their lack of commitment to the underboob. I mean, I’d rather they just pull her shirt down a bit and cover it up but if you’re gonna do it, don’t go halfway. It just looks like a mistake in the sculpt. These are the kind of serious details a true figure critic pays attention to.

Iro: This seems like a great figure marred by really lame character design. As far as I know this character is the God Eater franchise’s main waifu, and I suppose there’s at least enough detail and care put into this figure to reflect that. Put on a proper shirt, though. Gosh.

Timmy: Really digging GSC’s rendition of the otherwise well represented by figure standards Alisa. The base, and the way she is perched atop it is really neat and gives her a very floaty, weightless feel. An interesting effect considering her big ass sword. Everything else is on par with what I expect from GSC resulting in a real nice figure. 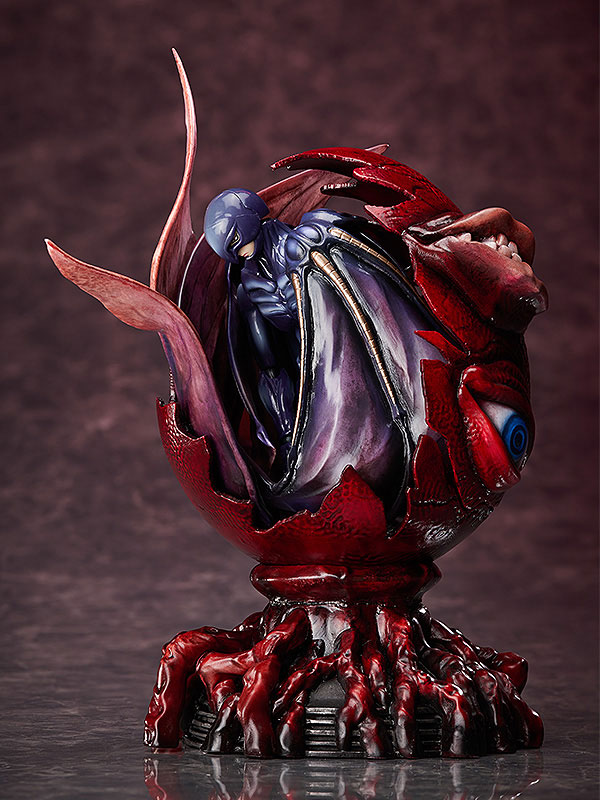 Zigg: I don’t have any experience with the Berserk franchise so I don’t know the context for this guy, but I know fabulously gross and creepy character design when I see it and this is a prime example of that. It’s an unusual aesthetic for a figma to take but Max Factory handle it with aplomb and the result is one of the more unique and interesting figures to come out of the line for some time. The egg base is very cool as well and a neat addition, but the prices for these things are really getting out of control.

Jel: So is this the closest thing we’re going to get to Batman figma? Joking aside, the only thing I know about Femto is he’s a rapist so that’s the most positive thing I could think to say. The optional demon egg base thing sure is an interesting addition and I wouldn’t mind seeing more figmas go that extra step but overall? Eww gross.

Iro: Oh, this is a figma? That sure is a big, fancy base for a figma. I guess it explains the big, fancy price tag… except the basic version is also super expensive.

Timmy: An interesting figma for sure and I think he looks pretty great. The exclusive base is a neat addition as well but at a very gross price. 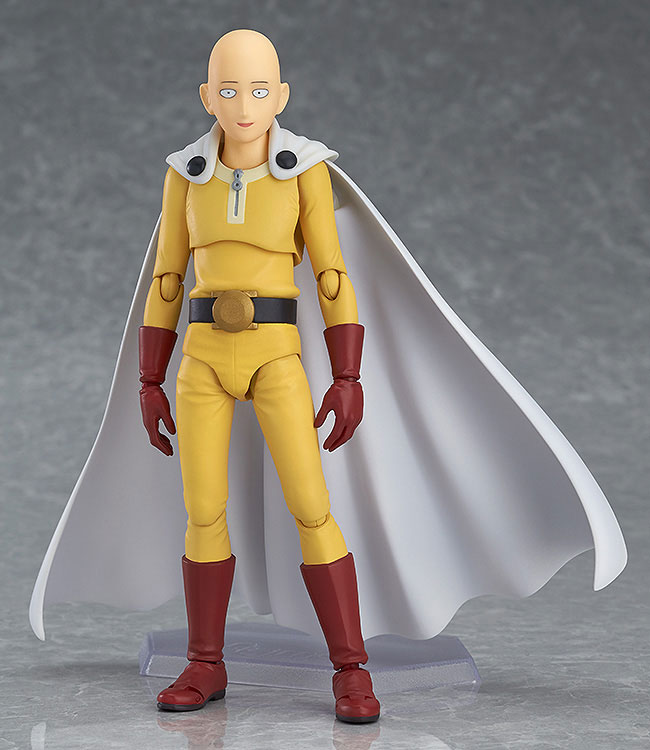 Zigg: Saitama here is a pretty good example of the malaise that is affecting figmas in general these days – kind of simplistic, a lack of imaginative accessories (or accessories period quite frankly) and a grossly inflated price for what you’re getting. It doesn’t really help is that the entire joke is that he’s sort of a boring character, but the lack of effort here is palpable and kind of worrying.

Jel: BACK IN MY DAY, figmas were bigger, came with a lot of accessories, had great sculpts, and cost less than 3000 yen. You can’t say any of that about poor Saitama here, and I’m not sure if that’s a commentary on the poor state of figmas in general or this one in particular is just bad. I understand Saitama is not a particularly complex character design, but he looks so dull and lifeless. The nendoroid version at least shined up his belt buckle and gave him a convenience store bag to make things interesting. You’re probably better off just buying that.

Iro: This is about as boring a figma as you could possibly make. It isn’t as though Saitama’s character design is particularly flashy or anything, but gosh this feels like it has no spirit at all. Even the included Serious Face feels like a mediocre accessory. Throw it all with rising figma prices and this just isn’t worth it.

Timmy: Ehh, not impressed. All this back in the day talk has me reminded of Max Factory’s Sayaka figma and how they included a cloth poseable cape among all her other accessories at 60% the price. They could have at least thrown the same thing in here to justify things a little better.

Zigg: As well established I’m a sucker for action poses, and this is one of the best out there. A cool base and some actually genuinely neat alternate display options definitely make this a figure worthy of notice. I think I probably jsut prefer the regular sword and face mask to the truly outlandish alternate version, but it certainly packs an undeniable visual punch.

Jel: Even after all these years this is arguably still the best Saber Alter, so why not just re-release it? Her sculpt is great, but it’s the menacing pose and the ridiculous alternate sword option that really sell you on the figure. I’m still more partial to Saber’s original design, but if you like Alter and missed it before this is certainly worth grabbing now.

Iro: A Saber Alter figure that’s in-character, in proper attire, and depicting one of her actual scenes? What?? (Also, that powered-up Excalibur is pretty great.)

Timmy: It is great to see more people get their hands on GSC’s original and excellent line of Sabers. Like the others, plain ole Saber is still my favorite as well but Alter is still a very excellent figure. I have Lily on order already and I am oddly tempted to complete the set, damn you GSC. 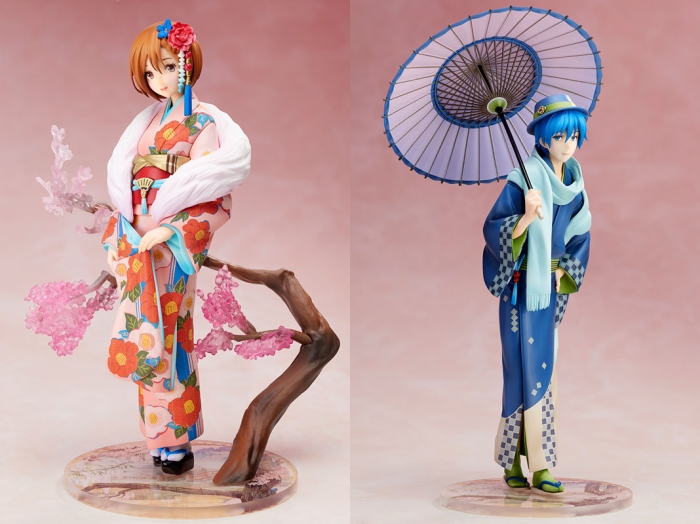 Zigg: Very lovely colour palettes and a great chance to use the Vocaloid designs and design touches for something other than another boring default outfit figure. I really like the cherry blossoms on Meiko as well. Quick note – while these are ‘exclusive’ to a few retailers, one of them is AmiAmi, so getting hold of these guys won’t be as bothersome as grabbing an exclusive would normally be.

Jel: I don’t know anything about the company that makes these and they’re a little small at 1/8 scale, but I really like them. The use of the character’s image colors are striking, and i particularly love the tree wrapping around Meiko. About the only possible negative is the level of detail seems slightly sub par, like in Meiko’s fur and Kaito’s scarf. But the way they are sculpted it almost looks like a style choice than a lack of quality, so I’m fine with it. Nice work, and I’m sure we’ll see the other vocaloids in due time.

Iro: Pretty, but the only vocaloids I know of are Miku and Megurine Luka, so I have trouble bringing myself to care at all about these nobodies. Not that I care about the ones I mentioned, but you get the idea.

Timmy: Very lovely. Kaito feels a tad underwhelming to me compared to Meiko with her sakura tree branch and especially Miku who also gets an umbrella along with a bunch of other stuff, but they all seem to be excellent figures overall. If I had the spare cash and space I would have picked up on this line, but for now I am content with admiring from afar.