Here at the Glorio Blog we always strive to deliver QUALITY anime coverage, regardless of our production schedule. It helps when there’s a lot of good shows to talk about of course, and I’m probably going to sound like a broken record here but wow this season is good. Yuri and March deliver as always, Girlish Number and ClassicaLoid are turning out pretty good, and somehow Aqua is still watching (and enjoying?) Kiss Him, Not Me.

Jel: After a few weeks of mixed messages, I was glad to see this episode deliver the type of kill shots I’ve been wanting since the show debuted. Kuzu-P makes a strong case for most annoying character of the season. Seeing his terrible ideas validated is extremely frustrating, but it makes for a scathing indictment on the people that fall for it. That’s right anime fans, you are ultimately the ones with the power and it seems that might be the true message that Girlish Number is trying to send. That would all be pretty dry on its own, so I’m glad Chitose’s role in all this continues to be interesting. They very intentionally made her dialogue line up with Kuzu-P, even sharing the same catch phrases. There’s no question that she is part of the problem. Hopefully they’ll keep up this level of intensity moving forward.

Yuri on Ice – He’s not a piece of meat, you know

Artemis: Yuri was back in fine form this week. Everything that was just a little bit off in the previous episode was nailed in this one – the pacing was smooth, the focus was razor-sharp, and oh dear god that choreography was worth the wait. The beauty of a really well-done sports anime is that allows the audience to become genuinely invested in both the characters as well as their chosen discipline, even when viewers know absolutely nothing or even previously cared about said sport. Yuri On Ice does that for me in spades; I was practically glued to the screen, and the episode itself felt about two minutes long. If that wasn’t enough, might we actually be getting a mainstream anime series centered on a queer relationship instead of just one filled with queer-baiting and awful BL tropes??? Because that would be amazing.

Aqua: Credit where it’s due, Kiss Him, Not Me actually tried to address the biggest criticism levelled against it this week, temporarily reverting Kae back to her comically overweight old self to examine how true her suitors’ love truly is. As usual, Nishina and Mutsumi pass the test with flying colours, but this is mostly an Igarashi-focused episode, documenting how he comes to love Kae for who she really is after all. Sure, it’s not a souldsearching session Kiss Him, Not Me deals with in the most subtle of ways. Of course Kae retains her kind and gentle soul in spite of her grotesque appearance. Of course all the boys end up falling for her all over again. And if course she’s managed to lose all that weight again by the time the episode’s done. But hey, I’ll at least give them the credit for getting that elephant out of the room. A generic justification for your premise is still better than an offensive one. 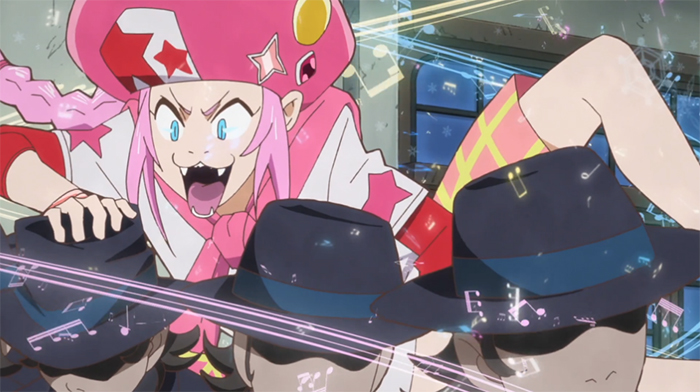 ClassicaLoid – Motes has things under control

Jel: I’ve been saying since the beginning I wanted to see a showdown with Bach-sama’s group and this episode delivered the goods. I’m loving the delightfully bizarre interpretations of the composers works, turning The Nutcracker’s Mouse King into a modern day gang boss and, well I don’t want to spoil Beethoven’s latest Musik but it was an interesting stretch to say the least. I also loved how they worked in memories of Kanae’s father. Flashing back to moments that defined his character was so much more effective than just blurting out whatever happened to him, and it added a warm, sweet touch to Beethoven’s borderline obnoxious gyoza obsession. These past two episodes have seen ClassicaLoid reach its potential, and even though it took a little while to warm up I’m feeling good about the second half.

Jel: I was enjoying learning Rei’s backstory through little snippets here and there so it was a bit jarring this week to get an entire episode devoted to putting it all out in the open. That said, it doesn’t mean his story isn’t any less tragic or fascinating. Obviously seeing Rei lose his family and get sucked into a bad situation was painful to watch, but more interesting is seeing how it has shaped him. The abuse and the unfair guilt he feels really helps us understand his character, to where his attitude and his actions up until now make perfect sense. I’m glad they didn’t connect the dots with our earlier glimpse of Kyouko as there was already enough tragedy to deal with for one episode, but I have a feeling we have not seen the last of her attempting to ruin Rei’s life. Hopefully next week we’ll be back to business usual, at least for another couple of episodes before it’s time to deal with personal demons again.

March – Nothing but happiness and sparkles in this episode, yup, that’s it

Artemis: Man, Poco sure is hammering its point home. That’s right, I’ve finally figured out what this series is all about. It’s not particularly interested in the supernatural despite its titular character being a transforming tanuki; it’s not about the other main character learning to become a parent/caregiver; it’s certainly not about udon. Heck, it’s not even overly concerned with being a slice-of-life show, because what eclipses all of that in terms of importance is countryside vs. city living. Poco is basically a giant advertisement not only for Kagawa, but for abandoning the big cities in favour of rural towns all across Japan. Seriously, how many times have we heard Souta say now that he might have made a mistake leaving for Tokyo, or that he may after all have been looking down on people still living the same lives in his hometown? Don’t get me wrong, my heart is with Japan ruraldom as well – especially when it comes to Shikoku – but at this point Poco has become more commercial than story, and I just can’t view that as a positive.