Just like last week, both of our final combatants deliver fantastic episodes but this time, the fight ends for real. Will Takagi-san pull off the upset or will A Place Further Than the Universe aka South Pole Girls fulfill its destiny as the best cute show of the season? The final battle begins NOW!

Jel: ​As someone who loves cats, this episode certainly started off on the right foot. I’m glad they keep squashing Nishikata’s unfortuante “boys can’t like cute things” mentality, which really seems like a stretch when petting cat isn’t “manly” enough for him. In fact, I’d venture to say girls will like you even more if you are open about liking cats, or hey, just being open about what you like in general. Just saying. I also appreciated the three girls were used sparingly and in context with the main segments again. If they had been appearing they way they have the past two weeks I would have had nothing to complain about this entire time.

Of course the most important thing this week was the surprisingly long final segment. The fortune telling angle was an easy setup for the usual teasing from Takagi, but the “critical hit” moment did a great job keeping up the pressure from last week. Seeing a rare glimpse of Takagi’s true feelings had a lot of impact. It makes you realize how much work she’s been doing to make the relationship work and, to a certain extent, how much of the emotional burden she’s been carrying. They manage to say so much in one small moment, and I think that’s where the depth of Takagi-san lies. Through all the seemingly cute and light-hearted joking around, they’ve been building up a living, breathing relationship and we are very much ready to see it blossom.

Marlin: People keep knockin’ Takagi-san for being the same thing, but I think this episode shows just how well the story has let the relationship between these two grow gradually as the season goes on. Our memories may forget all the innocuous days which built up our friendships in favor of the moments that define our closeness, but I think Takagi’s strength is reminding us that relationships aren’t about large sweeping overtures, but intentionally spending time with the people you care about.

Takagi-san – THAT’S IT. THAT’S THE SHOW.

Jel: ​I have always appreciated the level of complexity to Shirase’s grief. She’s never shown to have a linear, black and white path to “getting over it”, for lack of a better term. The fact is, you never do “get over” losing a close loved one and they’re certainly not saying that Shirase should. It is possible though to keep living your life and be happy, which makes all the friendship building we’ve been doing over the entire series feel that much more meaningful. It was Shirase’s grief that brought these four girls together and gave her the means to cope.

That made the final half of this episode incredibly emotional, and I appreciate they did let the station scene play out in a more organic way than usual. Sure it was still super dramatic, but the final events played out naturally without a lot of dialogue or over explaining what everyone was feeling. I think it’s safe to say we can stop being worried about South Pole Girls sticking the landing, and I’m looking forward to the final episode. I think having addressed the elephant in the room this week, it will be a nice opportunity to take a victory lap with the girls as they look forward to enjoying the rest of their lives. 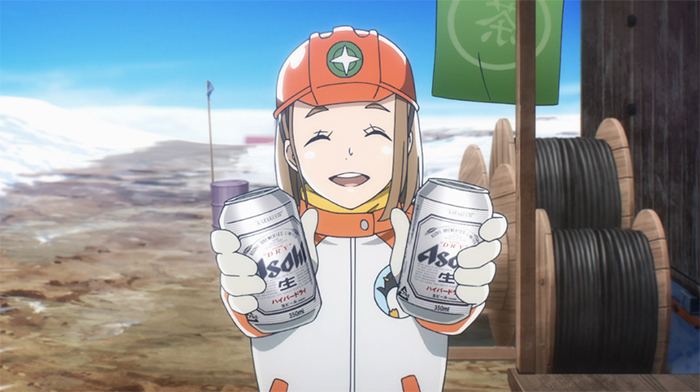 South Pole Girls – one more sponsor before we go!

Marlin: We have been talking about why Violet Evergarden feels strange in the chat recently, and I think South Pole Girls answers that question. In the latest VE, the episode was perfectly crafted to pull at the heartstrings. Music swells, directing cues, it all works to try and make you a puddle on the floor. South Pole Girls aims at the same thing this week, the major difference being this show has earned its drama much more effectively. Considering it’s been a bit overwrought from the beginning, this ratcheting up the drama for Shirase’s sake comes off perfectly natural, and once again having these teenage girls act their age has been refreshing. Without a doubt, this is the best new show of the season. Is it the cutest show of the season? I would argue not, but we’ve long bucked the letter of the law to hold up what really is good art.

Euri: Without making this post all about Violet Evergarden, I will say that episode ten of that show reduced me to a bubbling mess, whereas this episode, while incredibly sad, did not. I think this is because I can relate more to one than the other, but whatever, the point I’m trying to make is that your mileage may vary. Nonetheless, short of Shirase’s mum showing up completely unharmed in the final episode, this series is one of a handful of shows that are fighting for best of season. This very important and scientifically accurate battle royale is merely the first hurdle.

As great as the last two episodes of Takagi-san have been and as good as I think the last episode will be, at the end of the day it’s just not enough to take the top spot. Even in the best case scenario in which Takagi and Nishikata end up admitting their feelings for each other (which I am almost certain will happen) I can’t in good conscience say that would top the more complex emotions and relationships in A Place Further Than the Universe. Ultimately that may be an apples to oranges comparison, but nevertheless a decision must be made. Takagi-san gets the axe, which means it’s time to crown our winner…

Presented by Asahi Breweries: Official Beer of A Place Further Than the Universe. Please drink responsibly

Today’s Menu For the Emiya Family

Wait, that can’t be right… let’s try this again:

Presented by Asahi Breweries: Official Beer of A Place Further Than the Universe. Please drink responsibly 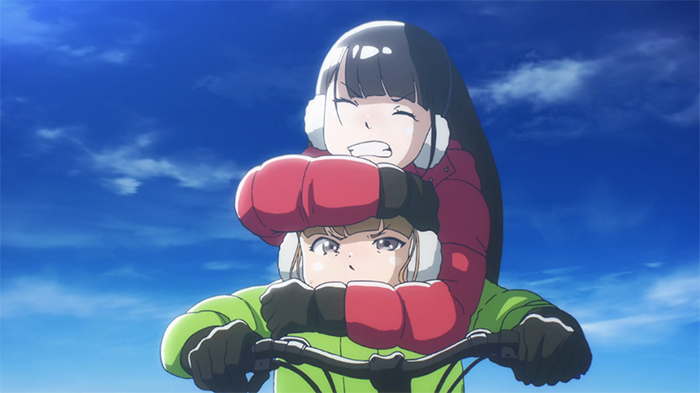 A Place Further Than the Universe aka South Pole Girls

While I think South Pole Girls started out meeting the cute anime criteria to be in this competition, I think it’s also fair to say it evolved into something bigger, something substantial enough to be in the conversation with March Comes In Like a Lion, Violet Evergarden, or any other more “serious” anime airing this season. The show’s attempts to tackle the hard parts of friendship, grief, and growing up are far more ambitious than anything else we saw in the competition. Most importantly though, it takes on those topics with a level of honesty and realism while still remaining optimistic, making it a joy to watch from week to week. From start to finish, there was never really any doubt this would be our Winter 2018 Battle Royale champion.