Love is in the air as School Babysitters and Takagi-san double down on their romantic plot lines. On the flip side, A Place Further Than the Universe has a whole lot of vomiting, although I suppose true love is being able to throw up in front of someone without shame… OK, look, I’m just stalling because we’re approaching the end of the Battle Royale and I don’t want to cut any of these shows. AHHH!

Jel: I guess the only notable thing this week is the first half barely has Koizumi in it, yet the girls still feel compelled to get ramen. Other than that uhhh… I guess we get more Yuu stalking Koizumi. It’s still enjoyable I suppose but I feel like maybe we’ve seen everything this show has to offer at this point. I’m sure there will be at least one more sweet moment like the episode at Yuu’s house and that’s probably it. Koizumi will still love ramen above all else, Yuu will still love Koizumi, and the status quo will be maintained.

Jel: It’s been really sweet to see Rin and Nadeshiko’s relationship develop over time, with Nadeshiko not really forcing the issue and Rin being willing to slowly let her creep into her life. It’s been even better seeing it happen without any of the usual anime clichés, just a pretty normal, natural friendship. Well, I suppose we get at least one cliché with the drunk teacher, but we can probably let that one slide. It’s just nice to see how far the show has come from the first episode, dodging all the pitfalls I assumed it would fall into and turning into a really pleasant watch.

Jel: So we’re all on #teaminomata, right? I mean, the other girl hasn’t even talked to Ryuichi and it’s kind of a joke that they’re making such a big deal about her despite how little development she’s received. Also, I’m all for dumb and silly anime romance stories but can we just let the poor boy live his life for a bit? I feel like there’s still a lot to unpack only a few months removed from his parents’ death and the fact that he’s basically a slave right now. I suppose it would be sweet to see him get a friend, girl or otherwise, that he could share his feelings with, but even that wouldn’t be necessary. I guess I’m just more interested in the healing angle at this point since that’s the show’s most interesting, unique characteristic.

Euri: Who cares about hooking Ryuichi up (though #teaminomata, absolutely) when the twins are absolutely adorable in this episode. Honestly I could put Babysitters in the Nice Moment of the Week section week in week out, it’s just too darn cute for its own good.

Jel: ​Can we just say they’re dating now? Like at one point Takagi says “it’s a date” and Nishikata says “OK” so that’s good enough, right? I don’t know how exactly they do it, but running through these classic dumb school rom com scenarios still manages to feel fresh and cute. Think about how many times we’ve been through the “swimsuit shopping” episode or the “coming over to your room to study” episode and yet here we are again and I kind of love it. This episode did have me yelling at Nishikata to please be honest. I’m not saying he has to come out and say he likes Takagi, just saying he should go ahead and admit he’s into 100% Unrequited Love. It will make life much easier.

Marlin: I’ve been loving that there’s a real continuity to this show. Last week the characters talked about going to the ocean, and so obviously this week Takagi is out to buy a swimsuit. As a former 13 year old Inuyasha fan that liked the show more for the romance than the fights, I can sympathize with Nishikata’s fear that people might pick on him for it. I continue to love just how outclassed he is in every situation. This show has a great natural feeling to it, and while Takagi is still Einstein compared to the babbling mess she makes of Nishikata, the final scene left us with a real sense that they’re becoming closer.

Jel: One of the minor complaints I’ve had about South Pole Girls is how the more serious or poignant moments can be a bit too on the nose. This episode did a great job of balancing things out, taking the difficulties of their situation seriously but still lightening things up when needed. Probably the best moment is when the girls are convincing themselves to ganbare through their sea sickness in typical anime pep talk fashion, building to Hinata triumphantly getting out of bed and declaring… she has to go throw up again, as do they all. I feel like previous episodes would have played that scene totally straight and it would have been acceptable, but this is so much better. More improvements like that will tighten the stranglehold this show already has on this season.

Euri: I can’t help but think these girls should be under higher supervision. If they’re okay getting on-deck while water is being thrown about and the boat is leaning at ridiculous angles, I don’t feel good about their survival chances once they reach Antarctica proper. Also I love that the show actually explained Mari’s odd-looking bangs in a completely throwaway manner.

Marlin: I find the idea they just went out on the deck in the middle of a storm without anyone telling them otherwise highly suspect, but obviously the show had to have some upper to end their struggle with. That aside, it really was a great episode that managed to make the realities of ship living entertaining to learn about. I also loved how Mari said these terrible experiences are the ones that form the best memories, because it’s so true. I used to work in nature, sure nothing as extreme as Antarctica, but with its own challenges, and I’ll never forget how we all got through the rough times together.

There’s been very little specific episode to episode continuity in this series so it was kind of cool to see a call back to a previous episode. More importantly though it was a very sweet glimpse into Nishikata’s true feelings, which is surprisingly rare considering we spend half the show inside his head. It was also just adorable seeing Takagi’s reaction, a nice reward for all the hard work she’s been putting into this relationship. This is the kind of moment that elevates Takagi-san above its simple premise as well as most of its competition. 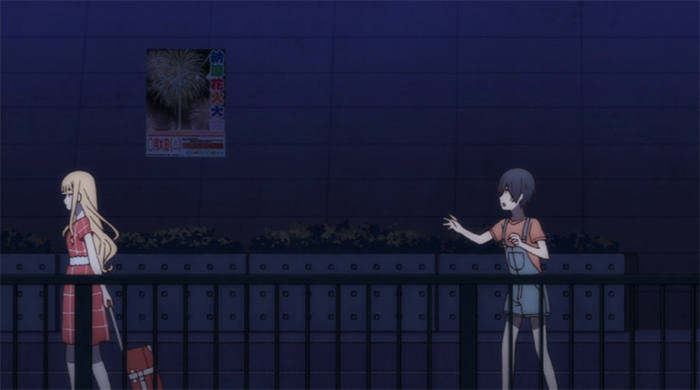 Times are getting tough here at the Cute Anime Battle Royale and while Ms. Koizumi continues to scratch my itch for dumb anime comedy, someone has to go. THERE MUST BE BLOOD! The show unquestionably has the lowest upside of the remaining combatants. I’m comfortable saying we’ve seen everything it has to offer and it’s just not good enough. Of course this means we probably won’t have any corporate sponsors for the rest of the Battle Royale, but that is the kind of journalistic integrity we strive for here at The Glorio Blog. And so with that I’m sad to say Ms. Koizumi is…