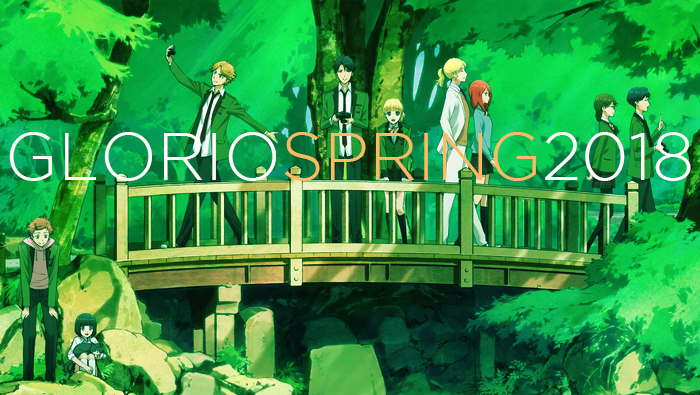 ​I guess anime is far from dead as the spring season is jam packed with more shows than I think we’ve ever seen in the history of The GLORIO Blog. Lots of new shows, lot of returning old shows, lots of continuing shows from last season… it’s a bit overwhelming but we are here to help you sort it out. Part 1 of our guide has me excited for Doga Kobo’s new original off-brand Nozaki-kun clone, and there’s certainly a variety of other shows to check. Let us know what looks good to you, and we’ll see you in part 2.

Here’s how our anime previews works:

The guide does NOT include:
• Sequels we do not intend to watch and write about
• Continuing series from the previous season
• Shorts
• Movies
• OVAs or other one time specials

Now, on to the previews!

​Aside from portions of the Macross series, legendary director, mecha designer, and idol lover Shoji Kawamori has a pretty spotty track record. With a lot of the same key staff in tow from the mediocre Macross Delta, I can’t say my hopes are super high for his new original project. To be fair, the premise sounds like it could be decent: a reactor explosion has ruined the environment and several years later new organisms that are both organic and mechanical threaten humanity. This is of course is an excuse to stage big robot fights. At the very least they got Bump of Chicken to do the OP so it can’t be all that bad, right?

​Alright, there is a LOT to unpack here: the uma musume or horse girls are basically just girls with tails that run fast? Thing is, they are still raised and raced like horses? Also, they are trying to be idols too???? I…. what???????? The anime is a tie-in with an upcoming Cygames mobile app that will undoubtedly be a smash hit, like every other Cygames property, so you too will be able to collect a stable full of horse girl… idols. Perhaps the only saving grace is the fact that this being handled by P.A. Works, which means it will at least look nice and probably won’t be super pervy. Probably.

​Speaking of a lot to unpack, this a magical girl show except instead of the main character contracting with a cute mascot character, she makes a deal with the yakuza? To save the boy she likes, she transforms into a super powered hot magical guy wearing the pink Madoka Magika outfit. Right away there are alarms going off in my head as the “haha that guy is in a pink dress” joke seems really dated in 2018, but I don’t know how much they’re going to lean into that. The trailer seems to be taking this 110% seriously, which makes me think this is going to be god awful or it will be the best show of the season. There will be no middle ground, we’ll see how it goes. (Crunchyroll decided to drop the first two episodes an hour before this post went live, so here you go. We’ll try and get to them as soon as we can.)

Kakuriyo no Yadomeshi, Making a Living at an Inn in the Afterlife

​Aoi’s late grandfather has somehow gotten in debt with the gods and when they come collecting, one of them decides to take her as a bride for payment. This does not sit well with her, and she offers to work at his inn in the afterlife instead. We’ve actually had quite of few of these laid back “supernatural inn” shows lately but even so, this sounds alright. The trailer has me worried the supernatural setting might be too ambitious for the production values (also this is being made by Gonzo), but other than that it seems like it’s worth checking out.

​The long running soccer manga has never really gone away for too long over the past 30+ years, but it has been about 16 years since the last anime adaptation. A lot of sports manga/anime cliches started here, so if you’re feeling nostalgic or want a history lesson, might be worth a look. At the very least David Production has built a solid reputation for reviving old manga and turning them into anime, and I appreciate they didn’t really update the character designs much. I don’t think this will appeal to everyone, but I’m sure it will have an audience.

​The third entry in the increasingly disappointing Gundam Build series, Divers seems to be taking us even further from the Gunpla building fun of the original and throwing us into a VR world. Ugh. I don’t feel particularly qualified to say much more on this one, just everyone brace themselves for our resident mecha expert Gee’s angry hot take once this finally airs.

Legend of the Galactic Heroes: The New Thesis Encounter

​I never did invest the time to get into this classic space opera, but if you’ve been hanging around anime as long as I have it’s something that was always on the radar. I mean, mixing spaceships with complex, turn-of-the-century style political intrigue is what we watch anime for, right? ….right??? ANYWAY, this new series seems to be a re-telling of the story, although you have to wonder if/how they plan on condensing the original 100+ episode anime into the scheduled 12. Will it just be an homage to the original to appeal to the old folks, or will this be a teaser to hook new fans? We will see soon enough.

​ONE DAY, a guy with no friends who only likes 2D girls in anime and games gets stuck working with the most beautiful, popular girl in school… wait, just hear me out! If this show is going to be bad, it’s not for the reasons you’re thinking. This is actually based on a shoujo manga, so if anything I’d be worried about falling into the pitfalls on that side of the aisle than say, the usual ecchi fare like accidentally walking in on the girl changing or whatever. I mean, I’ll take dumb relationship misunderstandings between a couple that appears to be actually dating over that any day, assuming that’s even what’s happening here. So I’ll at least give it a look. Let’s just hope Hoods Entertainment still exists after their recent troubles.

Tada-kun Does Not Fall In Love

​At the very least we can be excited for this series because it reunites all the key staff from classic anime comedy Monthly Girls’ Nozaki-kun, right down to the same artist doing the OP. That said, this story about a Japanese student travelling in Luxemborg and falling in love looks, well… kind of boring. It seems like they are going more for an earnest romance show than a comedy, like they’re going for that Makoto Shinkai Your Name crowd or something. That’s fine, it’s just harder to judge until we see it. I’m definitely excited to check it out regardless of the final outcome. (Of course a new trailer came out hours after I wrote this, and it looks a LOT more like Nozaki. I’m excited! you can watch the original trailer that I going off of here.)

​I guess moe isn’t dead yet, as this series’ sickeningly cute, squeaky voiced characters are starting to feel like a relic from the early 2010s. Yes, it’s nearly time start feeling nostalgic about 2010. This is essentially another show about cute school girls doing a specific activity and this time it’s the super boring and overdone “making manga”. Come on, at least give us some airsoft guns or motorcycles or something. I’ll also just mention the main girls hair clips looks suspiciously like Yuno from Hidamari Sketch. Just saying.