“The Bell Tolls, The Curtain Rises”

All out war erupts between Seito and Touto as Stark begins to use the power of Pandora’s Box to build a mighty tower.

If there’s one thing this week’s instalment definitively proves, it’s that Build is much more fun when it isn’t taking itself nearly so seriously. The opening montage, complete with apocalyptic choir and a million crazy things happening at once, is easily the most fun I’ve had watching this show in ages. It reminds me of the level of train wreck which Code Geass R2 eventually reached – not everything happening is going to make sense or even be good, but you’re damn sure going to be entertained. 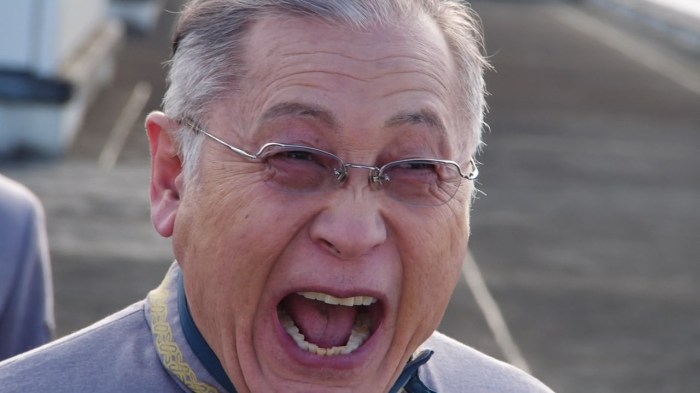 That might sound like damning with faint praise, but honestly I think some silliness is what Build needed after a few weeks of pretty dry tournament-style shenanigans. This episode felt like a definitive step forward from the somewhat holding pattern that the Seito arc seemed to be in for a bit, refocusing attention on the more heavily sci-fi, mystical elements of the storyline. We’ve not really had, well, any foreshadowing at all about ‘Pandora’s Tower’, but at least the box is actually doing something rather than just being a McGuffin sitting around, and there’s a certain amount of visual impact to seeing the wall being torn down and reconstructed. It also places renewed emphasis on how the villain here is obviously Stark, and Nanba is pretty much just a sideshow. As fun as Nanba is in this episode, I kind of wish they’d just clear the decks of him soon so we can get on to the real meat of the conflict.

Another thing they could do with clearing the decks on is the entire plotline surrounding the Hokuto Three Crows. Look, I’m not saying that something as significant as our main character murdering a man should be easily forgotten, but the problem is they’ve kept hammering the death of the Three Crows for episodes and episodes now in the same basic way that doesn’t really have anything to say. It’s particularly hurt Kazumi, since he doesn’t really have much of a character beyond ‘avenge my friends’ at this point. In general, the show’s simplistic moralising is becoming a problem at this point – it’s trying to say something profound about the nature of conflict and the reasons why people fight, but it just doesn’t (or deliberately won’t – it’s a kid’s show) have a sophisticated enough emotional vocabulary to go beyond WAR BAD and LOVE & PEACE GOOD at this point.

With all that said, we do get a pretty good closing fight this week, with some real nice stylistic flourishes and a blessed absence of shakycam. Misora’s dramatic proclamation that she’s the queen of Mars is certainly setting up for a status quo busting story arc, but it also has me a bit worried. Build’s plot is already so all over the place that they’re going to need to close down a few plotlines to make these new ones work well. With that said, I’m totally onboard for anything which makes this show weirder and sillier.