In a world where horse girls live alongside regular humans, a simple country mare…er, girl named Special Week has moved to the famous Tracen Academy in the hopes of becoming the #1 horse girl in all of Japan. Also there are idols.

This is the kind of thing that I would absolutely believe was a parody if I didn’t have evidence to the contrary. It feels like a mobile game spoof that Gintama or Pop Team Epic would whip out for a one off joke, and that impression isn’t helped by the fact that, insane horse-human hybrids aside, this is an utterly generic high school girls do something weird show. There’s a huge number of different girls, each precisely calculated to fulfil a different fetish and each otherwise devoid of any personality. There’s an overdesigned school uniform, a creepy adult man who no doubt will turn out to be a superb trainer (ew) and an enthusiastic country girl determined to GANBARE her way to success. They even find a way to have a full on idol concert for god’s sake. About the only things which rescues this from utter oblivion is the fact it’s not openly porny, and P.A. Works’ generally excellent visual work, but this is still a weird, largely lifeless and creepy niche that I don’t care to explore further. 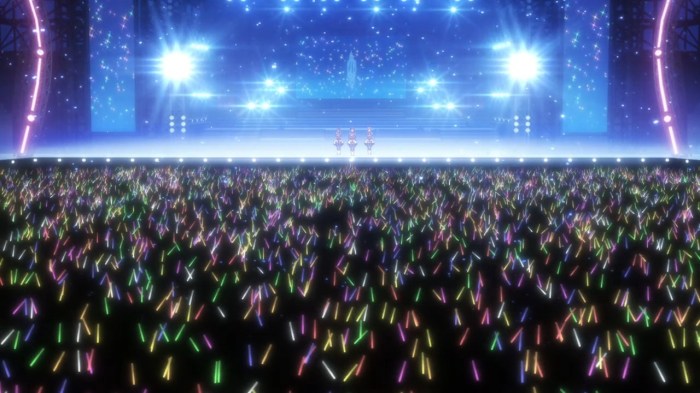 Iro’s verdict: Putting the Cart Before the Horse Girls

This is one of the most bafflingly designed-by-committee things I’ve ever seen. It’s like some suits sat around a table and said, “What are the kids into these days? Mobage with cute girl personifications of battleships? Well, we old men don’t know anything about ships, so how about racehorses? And what if we threw in an idol angle, those kids love idols. Singing idol horse girls, perfect. Snags those people with beast fetishes, too. Don’t forget the high school club activities! But wait, who do we get to animate this? P.A Works, of course! They’re great with shows about pretty girls! And they’ll do way better of a job than this show deserves!” So basically, this show is a strange curiosity, but the combination of all of its (technically quite well-made) pieces just rubs me entirely the wrong way.

Gee’s verdict: This is the Same Studio that Made 2015’s Best Anime

God help me, I just cannot deal with this show’s intrinsic existence. Each of its individual parts on its own would be upsetting or trite, whether it’s the idols angle, the high school slice of life, the by-the-numbers sports anime tropes, or the goddamn horse girls that are created by spiritual trans-dimensional impregnation. It’s a show that’s attempting to spin every marketable plate it can, and doing it with the kind of technical polish that only a well-funded P.A. Works can achieve. Sure, there’s nothing explicitly offensive about the show, but every single minute of it leaves me deeply uncomfortable in the pit of my soul for reasons I can’t quite articulate.