Hikari “Tsutsun” Tsutsui is an otaku who has no interest in real girls. After losing track of time while watching anime, he’s late for school and forced to clean the pool with Iroha Igarashi, a girl with a blunt personality and a loose reputation that’s well known across the school. With fate bringing them together, the two realize that maybe their first impressions of each other were wrong. 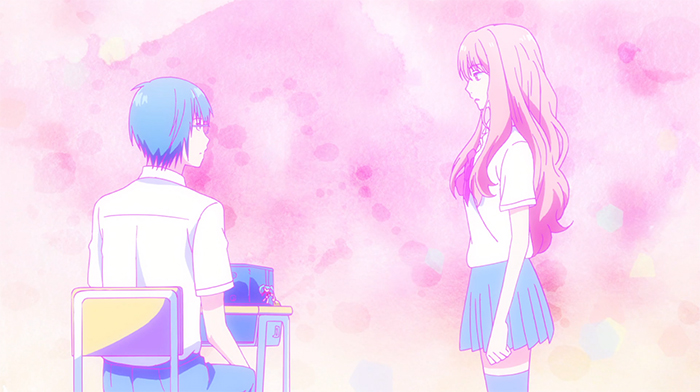 I think all of us at the GLORIO crew read the description of Real Girl and immediately assumed this would be some kind of trashy otaku fantasy worthy of a potential #HATEWATCH revival. I can assure you that that is not the case. I was surprised to discover that it is actually based on a shoujo manga, and while that doesn’t automatically protect it from having other issues, the change of perspective eliminates all the ones we were thinking. There’s no accidental gropings or walking in on girls changing, and Iroha does not exist solely to be ogled by the camera. So even if we stopped there, Real Girl has already far exceeded expectations.

Beyond that, I can appreciate the show is built on a core relationship made up of two equal parts. Both Tsutsun and Iroha seem to make negative first impressions, but they turn out to be pretty decent people when you look beyond that. His lack of life experience and her… well we haven’t seen exactly WHAT her deal is but there are some pretty strong hints at dealing with a sick family member or something… both have circumstances that have left them feeling isolated and finding each other feels pretty sweet. The fact that they actually start dating in the first episode makes it even more appealing.

If I could leave it at that I would wholeheartedly recommend Real Girl, but there are some nagging themes in play that bother me. On Tsutsun’s side, I have very little patience for what I would call the “nerd persecution complex” and ultimately the idea that a man’s worth is tied to whether he can get women to sleep with him. I would hope that Iroha likes him for more than just the fact he’s willing to get punched in the face for her. On Iroha’s side, I’m just waiting for them to reveal that she’s also an “innocent” virgin and that her reputation is all lies, implying that there would be something wrong with her choosing to do whatever she wants with her sexuality.

I don’t think the show is directly reinforcing these ideas, but it feels complicit by bringing them up and not really shooting them down. That doesn’t mean they can’t do that in the future though, and if they do move in that direction I… I can’t believe I’m saying this, but Real Girl could be legitimately good. At the very least I see enough potential in it to try another episode, so maybe this will end up as one of the big surprises of the season.

Artemis’ verdict: The Cringe is Real

Look, I have no particular issue with stories about otaku guys learning to deal with the real world, including real-world romance. However, the main character here is just so openly dripping in his disdain for women that I mostly just wanted to backhand him the entire episode. I get that this is probably at least partially the point – that the story will have him develop actual feelings for actual people that he’ll have to properly deal with for a change – but his logic for initially disliking his eventual love interest is not only insulting but also practically non-existent. He describes said high school girl he’s never even directly spoken with before as sloppy and promiscuous (I guess because she’s a straight-talker rather than the timid and blushing or feminine gossip girl type?), and incidentally, she herself spends the majority of the episode being pretty kickass… only to let herself be dragged away with little more than a token verbal protest by some guy with severe entitlement issues at the end – giving MC-kun the perfect opportunity to fight on her behalf. He loses the fight spectacularly, of course, but wins a kiss for his valiant actions. I can at least give the show kudos for keeping any fanservice completely out of the equation, but surely we can set the bar a bit higher than that this season? Combined with the breakneck pacing (seriously, it felt like we got about half a season’s plot development packed into one episode), I’m more than happy to skip this one.