This week proves I still know nothing about anime as the shows I was anticipating like Tada Never Falls in Love and Wotakoi are getting worse while the surprises like Real Girl and Last Period are getting better. Not sure if that will still be the case by the end of the season, but what I do know is that Hinamatsuri is still very good and you should watch that if you’re not already. Please.

Jel: ​First, I’m glad things were resolved with Takanashi without totally redeeming him. I do think they went too easy on him, but it’s clear by the end we’re still supposed to think he’s not a very good guy. Second, Ayado is an interesting twist on the female rival character. Usually the quiet, nerdy one would be the main girl and the rival would be the hot girl coming to steal her man, so it’s kind of fun to flip things around. She also seems pretty likable, maybe she can hook up with Ito or something. Finally, I continue to enjoy Tsutsun’s friendship with Ishino. It reminds me of Aguri and Keita in GAMERS!, the extremely rare platonic anime friendship that we need more of. Add that all up and this was a pretty solid episode. With presumably most of the cast in place, we should have plenty to work with going into the second half.

Jel: ​Forget gacha games or anime, Last Period is at its best when it’s a scathing indictment of the evils of capitalism… or I guess in this case, winning the lottery. The message that no one person needs that much money gets a little lost in the silly one-up battle between Liza and Gajeru, but make no mistake it is definitely there. The jokes continue to be solid as well, and I particularly like how nonchalantly they strip away everyone’s riches and return to the status quo. While this episode did lack the bizarre spectacle of last week, I’d still say it delivered. 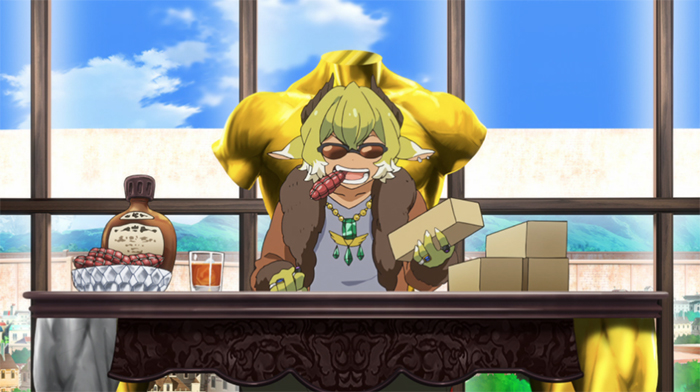 Marlin: I guess since the results of this timeline ensure that time travel is invented in Russia, it makes sense that eventually Okabe would get affected by their experiments. I wonder how far we’re getting pulled back into time travel. I’m also pretty confused by the decision to create this random child character who is abandoned. If she was so close to Suzuha, why is it we’re only learning about her now, and not in the original Steins;Gate? If Suzuha is so worried about the effects of time travel, why did she decide to just leave a girl back in time without thinking about how she would change things? Some things I will chalk up to the need to expand on the story. On the A.I. side of things, I’m a little disappointed that the professor’s goal is seriously to get Amadeus to fall in love. It’s like the ultimate cliche of A.I. Still, not all cliches are bad, it will all depend on how Steins;Gate uses it.

Jel: ​Let me say that the parts about Tada’s past and the subtle handling of the blooming infatuation between him and Teresa were OK. The rest of this episode was cliché anime trash. The café scene dragged on too long, the bath scene was totally paint by numbers (OF COURSE the girls had to talk about breast sizes), and the big reveal at the end was hardly a shock. I don’t mind sticking to a formula here and there but I feel like you can easily predict every single scene of this show with 100% accuracy. You need an extremely strong cast or some other hook to overcome that, and this show simply doesn’t have it. I’ll keep toughing it out for now but it’s getting harder to sit through every week. 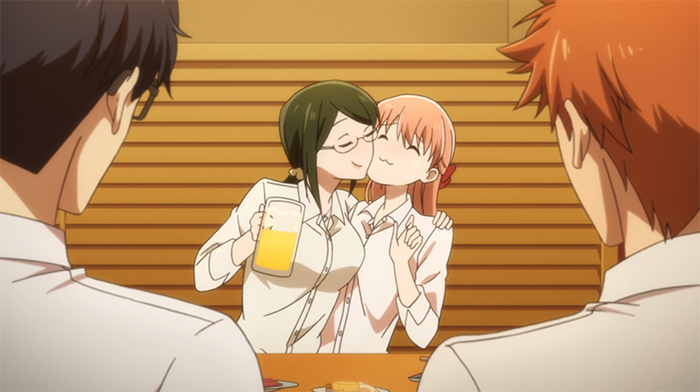 Wotakoi – Hmm, this might be a solution to this show’s problems

Jel: ​Alright, I’ve been cutting Kabakura some slack since he has always kind of sort of come back around to being a decent guy, but this episode was too much. What was up with that big make up scene? Hanako says all the bad things he does and then he just says “yup” and hugs her and everything is supposed to be OK? I guess they are trying to create a contrast since Narumi says her previous boyfriends were like that, but that just makes things confusing. If he’s that much of a jerk why are they trying to make us like him so much? This all just feeds my general impression that Wotakoi is a good idea being written by someone who doesn’t really know what they’re doing. I haven’t quite been able to put my finger on why yet, but it’s starting to become more clear as the show moves along. Once again Hirotaka bails the episode out in the end by being so smooth, but it’s going to take more than that to save this show.

Marlin: Toxic relationships like the one we see between Kabakura and Hanako are real, which makes what we see here hard to swallow if this show is still meant to be seen as a romantic comedy. Fighting constantly is not a sign of fondness, it’s a sign that maybe two people have been put into a constantly stressful situation that they might be better without. The big thing we see this episode is that both of them are extremely prideful and controlling, to the point that they keep wanting to step on the other’s happiness. Why should it be a problem that Kabakura doesn’t want to dress up in cosplay? Why shouldn’t Hanako be able to cut loose with some drinks (within reason) at the end of a long day? Naru points out a healthy relationship well when she talks about how they don’t need to have the exact same interests, but rather respect each others boundaries without denigrating them.

Jel: ​As much as I’ve been loving our adventures with Anzu and Hitomi, I feel like Hinamatsuri is starting to stray a little too far away from its original concept. Hina and Nitta are totally relegated to straight man side character duty this week, and I actually can’t remember the last time Hina or Anzu used their powers. That leaves the show with only its black humor to separate it from other slice of life shows. It works for now, especially Hitomi’s descent into the underworld which never stops being amusing. I’m just saying I really think they need to get back to Hina and Nitta next week. Fortunately that seems to be the plan if the preview for next week is to be believed, so I’m looking forward to that.

Marlin: Those were the most ridiculously well animated uniform sleeves I’ve ever seen, even more impressive when you think about how most of that was on boy’s uniforms, pretty much the most bland style in existence. All in all, I really enjoyed the jokes that got batted around this episode, even if the show is starting to feel more like an ensemble affair a la Nichijou rather than concentrated on our main pair as I was expecting.

Amanchu! – THIS IS NOT NORMAL WHY IS EVERYONE OK WITH THIS

Jel: ​I had some things to say about this episode and I forgot them all as soon as Pikari’s grandpa showed up. So can we talk about how he is a 9 foot tall egg man that swims as fast as dolphin? That’s all I can think about. I guess his character design is meant to be stylized the way all the characters have silly faces or whatever but we never see him in “normal” form so it’s really bizarre. Coupled with last week’s weird dream sequence and the fact that this series is somewhat connected to Aria, I have to wonder are they going to try and introduce some kind of fantasy elements to the show? I mean, they already have to a certain degree, even if they are offering explanations for them. I’m not sure how I feel about that as it pulls away from Teko and Pikari’s screen time together and let’s be honest, that’s what we’re all watching Amanchu for.