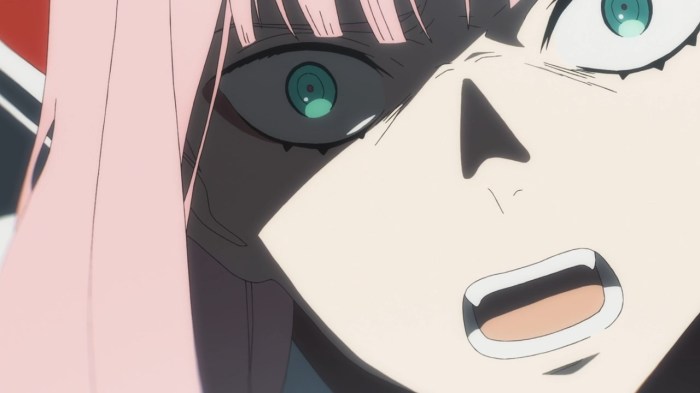 Saturdays at 12:00 pm EST on Crunchyroll

The Parasites gear up for the final battle against the Klaxosaurs, as Hiro and Zero Two attempt to activate a mysterious superweapon.

I suppose I should be grateful that FRANXX is at least attempting go somewhere with its plot, even if that ‘somewhere’ is the most stupid place imaginable. Consequently, this week’s episode is less boring than the last, but it’s possibly even more stupid. There’s a number of huge revelations here, many jaw-dropping, but not for exactly the reason the writers wanted I expect. Let’s dig in, because there’s a lot to unpack.

I guess we’ll start with the biggest, most impactful reveal, which is hey, aliens now! It’s a shocking twist sure, but only because it’s not been telegraphed in any way whatsoever. The best stories and shows are good at seeding intrigue early, keeping the audience playing the guessing game and gradually peeling back the layers to reveal the true nature of the narrative. It’s one of the ways you keep viewers hooked and invested in the show. But FRANXX has never even bothered to offer the barest hint at this extraterrestrial angle, so while it’s blindsiding it also feels extremely flimsy once you start looking deeper into it. That’s compounded by the fact that we’ve only got maybe four or five episodes of the show left tops, which is really not enough time to put enough meat on the bones of this story.

Furthermore, this arguably completely undermines the already feeble attempts FRANXX was making about commentating on the human condition. Given humanity has essentially been merely a proxy in this apparently long-running war between the Klaxosaurs and VIRM, it’s hard to take any of the show’s already flimsy moralising seriously at all. In fact, the more you look at it, the less sense the entire setup makes. VIRM are clearly a spacefaring race of incredible power and technology, so what was the point of this decades-long shadow game to manipulate humanity into doing their bidding for them? Why not just roll up with your giant fleet and trash the planet? Given the show claims that the Klaxosaurs predate humanity, and evolved into their current less sapient forms while in hibernation, it’s evident that at least thousands, and possibly millions of years have passed since the two races’ initial clash. You’re really telling me that manipulating a bunch of humans into building sex-powered corpse robots was the most efficient option on the table after all that time?

Oh yes, let’s get to the robots shall we? The revelation that the FRANXX units are actually the remains of dead Klaxosaurs is laughable on so many levels it’s difficult to know where to start. How about with the obvious though – this is ONE MILLION PERCENT a ripoff of the identical idea in Evangelion that the robots are in fact created from the very thing they’re designed to destroy. The difference is in Eva that was the culmination of a dramatic and thematic plot designed to highlight the attempts of humanity to harness a power far beyond its ken, whereas in FRANXX it’s the culmination of…??? I’ve tried not to knock FRANXX too much for the plot points it cribs from Eva because at some point that show was so influential it’s put at least some of itself in every mecha show since, but FRANXX has regularly gone above and beyond in attempting to ape it and the gap in quality is nothing short of embarrassing.

As it is, the entire set of revelations about the Klaxosaurs makes less and less sense. If you were trying to fight off evil aliens, why would you willingly ‘evolve’ yourself from sentient humanoids into mindless beasts, no matter how powerful said beasts were? Why would you turn yourself into liquid energy that, lest we forget, apparently can give humanity eternal life? What’s with the absolutely insane idea that the male Klaxos evolved to ‘pilot’ the female Klaxos, a concept so stupid that it clearly exists just to justify the ludicrous doggie-style piloting that the show hung its hat from? Why would you build a superweapon that can only be activated by two people and then only leave one of your species around to try to turn it on when it’s needed? None of these are small nitpicks – they’re big, major issues with the very base premise of the story, ones which the show seems to have little interest in patching.

Even if we move away from the big picture, overarching plot stuff, the show seems to be nearly unable to piece together a coherent narrative. The entire plot of this episode is centred around the massive, critically important Klaxosaur weapon Star Entity…which has never been mentioned or even hinted at before. This thing comes out of absolutely nowhere and yet it’s suddenly the most important thing in the entire plot, and apparently the reason Strelizia exists in the first place. It’s yet another example of how FRANXX just cannot even master the very most basic elements of writing a solid plot, yet it still wants to reach for the stars, both literally and metaphorically. Instead it remains firmly down in the dirt, and I can’t see it climbing out anytime soon.