It’s business as usual for all the Roundup shows, despite the fact that there’s only one episode left for most of them. I will also have to start preparing for life without any new Hinamatsuri episodes to look forward to.

Jel: ​First up, this episode looked terrible. I’ve mentioned the production issues Hoods Entertainment has had lately and its been showing, but this was definitely the worst I’ve seen the show look yet. That aside, I was on board with the actual content of the episode for most of it. Tsutsun balancing his desire to help out Ito with Igarashi’s good advice, essentially saying it’s up to Ayado and there’s nothing he can do it about, was all pretty good. But then what was up with that creepy brother thing at the end??? It’s one thing for him to be a jerk and get mad about dating Tsutsun but that ending where he caresses her face??? I guess Real Girl has a long history of dragging up some weird, tired anime tropes and then undoing them later, but I still don’t like it. I’m assuming there’s only an episode or two left so hopefully the can clean things up by the end.

Jel: ​I guess totally breaking the fourth wall and leaving the game is the inevitable end point for a show like this. Bringing up creepy poking mechanics and the VN style dialogue choices seems par for the course. I also applaud Happy Elements’ shameless self-promotion. It’s almost like they knew they’d never get a chance to make an anime based on their other properties. so why not fit them in now? That all said, I’m not really sure how good the episode actually was aside from the novelty aspect. There were no grand political statements or other weird twists like last week’s Android. Hopefully they’ll pull out all the stops next week. 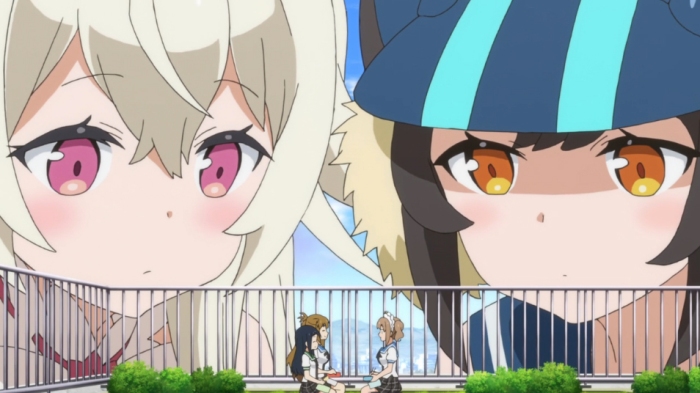 Last Period – Yes gacha fans, you are being judged

Marlin: Once again, Steins;Gate buries the lede. I had this feeling every time in the original series, and this clinches it: Every time Feris is on screen, the quality of the show just goes down astronomically. It’s a real shame, as the end of this episode hits hard again, highlighting just how much experiencing the real Kurisu has steeled Okabe for coming to terms with Amadeus. Now, it’s time to see how DURPA(still laughing every time they say that) will show their hand. Have they been bugging the two, waiting for this kind of information to come to light? Or will this revelation to Okabe give them the time they need to prevent disaster?

Jel: ​It was a long build up but the payoff for the joke in the first half was fantastic. Having everyone tease Nitta for his misleading TV appearance was good on so many levels. I also don’t think I’ve mentioned this, but Hina’s rotating shirts with words vaguely related to the scene printed on them is arguably my favorite gag in the show. The “YAKUZA” one was good this week, although I still think the “BYE BYE” and “SAYONARA” ones from the episode she was trying to tell Nitta she has to leave were the best. As for the second half, it was kind of weird that Anzu would end up hanging out with Nitta but whatever, more of Anzu being a precious angel is good for our souls. You can’t corrupt Anzu, she un-corrupts you. Now if you excuse me, I need to go face the sad reality that there is only one episode of the show left.

Marlin: I love that no matter how dark the comedy gets in this show, it’s never enough to break Anzu’s golden heart. Grass grows, birds fly, and Anzu is a Good Girl™. 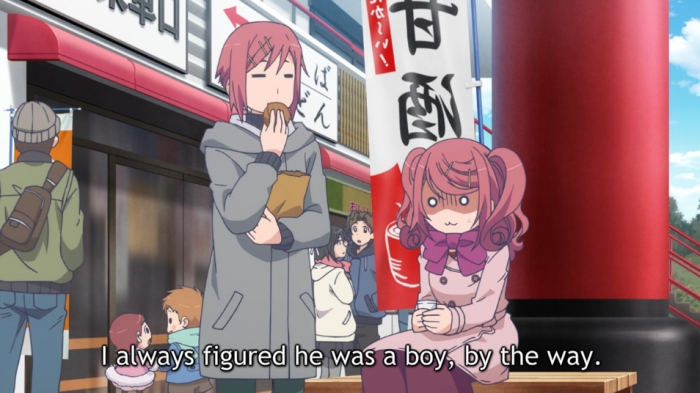 Jel: ​I haven’t really been a fan of Kokoro so burning another half an episode (pun not intended) on him wasn’t really doing it for me. And yes, we can switch to “him” now, can’t say I’m really surprised there. I guess we’re supposed to think it’s cute some little kid has a crush on an older girl or whatever but eh just give me more Teko and Pikari together. I was more surprised to see the return of Kotori and the fact they brought up the fantasy dream element thing one more time. Maybe they wanted to balance things out by giving Teko her own kid that’s in love with her. It was still a pretty sweet episode, especially seeing everyone turn out for Pikari’s birthday, so I don’t want to sound too negative. I just continue to resent the changes they made to the show.