Saturdays at 12:00 pm EST on Crunchyroll

Zero Two and Hiro face VIRM in a final showdown, while back on Earth the remaining Parasites begin to rebuild human society.

I’ll say this for ‘Never Let Me Go’ – it could have been a lot worse. I was fully anticipating some sort of supernova level event of awfulness for this final episode, but that doesn’t really happen. There’s a basic competency to it at least. The problem is, there’s not really much more than that, which results in everything that happens here mostly being a drone of predictable cliches, topped off with a little of FRANXX‘s trademark idiocy.

Perhaps the weirdest thing about the setup of this episode is how it dilates the timeframe to try and match conventional dramatic structure. There’s no real reason that Hiro and Zero Two’s journey to the VIRM homeworld should take two-odd years, except of course to delay the inevitable confrontation to the back half of the episode and pad for time beforehand. In isolation I understand this impulse, because it generally makes sense to build up to your climactic moment, but here it just results in making the actual fighting parts of the episode a weird sideshow.

In fact, the whole feeling of this episode is much closer to an epilogue or a post-script than an actual finale. Hiro and Zero Two’s battle against VIRM feels extremely flimsy and inconsequential and there’s a pretty noticeable lack of audiovisual bombast – the animation certainly isn’t anywhere close to the spectacular pyrotechnics of episode 15 for example. Sure, there’s a last minute crisis, but it’s solved pretty easily with an outrageous deus ex machina that is very in keeping with FRANXX‘s habit of pulling ideas totally out of its ass. There’s nothing wrong with using THE POWER OF FRIENDSHIP to defeat the bad guys, it’s as reliable a trope as they come, but the idea of it being done through some sort of pan-galactic seance is, er, a little sketchy. It’s also worth noting that our heroic couple don’t even really succeed in their mission – VIRM totally survives and vows to come back stronger than ever. The entire thing feels very disposable, which is not really something you want to be saying about you grand finale, and the result is never really in doubt from the opening moments of the episode. 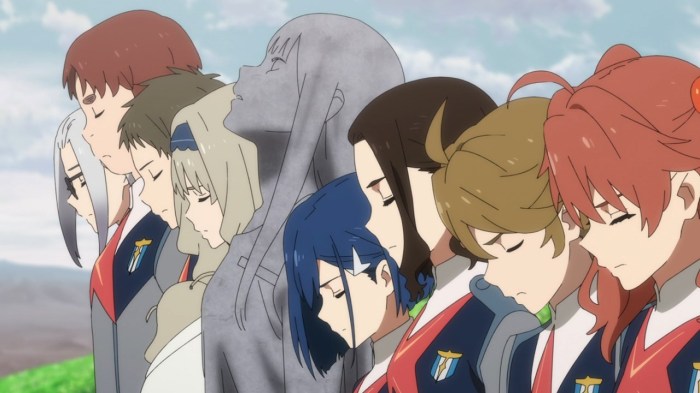 That’s not necessarily a problem – in fact given how tepid I’ve been towards Hiro and Zero Two the idea of a final episode which focuses mostly on the rebuilding of humanity isn’t the least appealing thing to me. Problem is, the show isn’t really interested in exploring the drama or actual mechanics of how the Parasites might rebuild society, instead wanting to wallow in its rose-tinted vision of happy families one more time. There’s no real attempt at trying to conclude any of the squad’s meagre character arcs here at all, bar an extremely out-of-nowhere romance between Goro and Ichigo. There’s been absolutely no attempt to indicate that she had begun reciprocating his feelings, but I guess that doesn’t really matter when the show is just about chasing a happily ever after for all concerned. 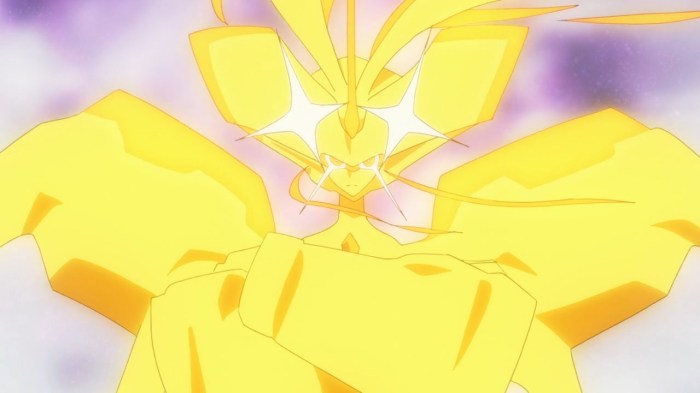 Thus the conclusion of pretty much every plot point turns out to be a safe choice with all the depth of a puddle. The Klaxosaurs just sort of…disappear, apparently happy to leave Earth to the species which so spectacularly cocked it up to begin with, while the difficulties of rebuilding infrastructure without magma energy are mostly glossed over in a quick montage. Naomi, the character with about five minutes of total screentime, returns this seems somehow to be a big deal. We learn that Futoshi got over his eating disorder by growing a dumb mustache, that Goro got a dumb haircut, and that Miku and Zorome haven’t changed in any meaningful way across the course of the show.That’s about it, save for the creepy focus on how much the ex-Parasites have sowed their wild oats and spawned babies almost like it’s some sort of competition. About the only potential note of pathos to be sounded here is the clearly dying Ikuno, but the show mostly torpedoes any attempt to focus on her as anything other than the ‘crippled genius’ archetype.

In the end, this episode is functional. It’s competent. It’s about as exciting and blood stirring as those terms make it sound, but it mostly works, largely by simply treading in the well worn footsteps of ten thousand stories before it. Even the ultimate fate of our hero and heroine is the safest, most conservative route you could go – the writers are too frightened to kill them off for real, but still want a big emotional gut punch, so we cop-out with a ‘destined reincarnation’ somewhere down the line. It’s an apt metaphor for FRANXX as whole really – pathos without the work to earn it, emotion without the skill to evoke it, and ultimately, a story that wanted to mean something, without the guts to say anything.

Our long nightmare is not quite over however, as this coming weekend I’ll be joined by a few other survivors for a Final Thoughts post where we’ll hopefully put this damn show to bed once and for all. Look out for it!