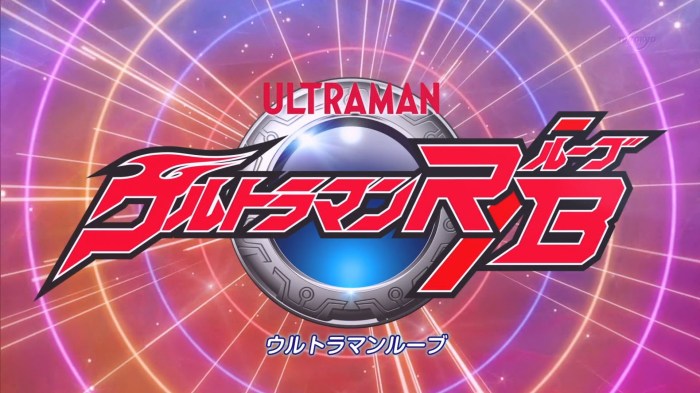 Two brothers, who really enjoy this sweet secret handshake they’ve come up with, become Ultramen and beat the stuffing out of a big dinosaur.

Can you believe that it was over three years ago that we took a look at Ultraman X? While I can remember that rugby episode like it was yesterday, the majority of the series fell flat for myself and colons and there wasn’t much desire to keep up with Orb and Geed, the shows that followed it. Still, it’s about time for a check-in with the franchise, and I’ve seen enough Kamen Rider at this point to know that each series can be wildly different in terms of plot and production values.

For Ultraman R/B, it’s… kinda hard to weigh in on the plot. We learn that the main characters are brothers that have a cool handshake, and that they run a clothing store out of the same basement you’ve seen in Kamen Rider W, Ghost and Build. There’s a little eccentricity between them all, but nothing particular outrageous. We learn about Aizen Makoto, a self-proclaimed ‘evangelist of love and goodwill’, who is definitely the most likely candidate for a bad guy so far. He’s a bit Tony Stark-ish, which makes me wonder if he might have some financial interest in giant monster attacks. Also, this is a kids show and he may just be a goofball. Hard to say. 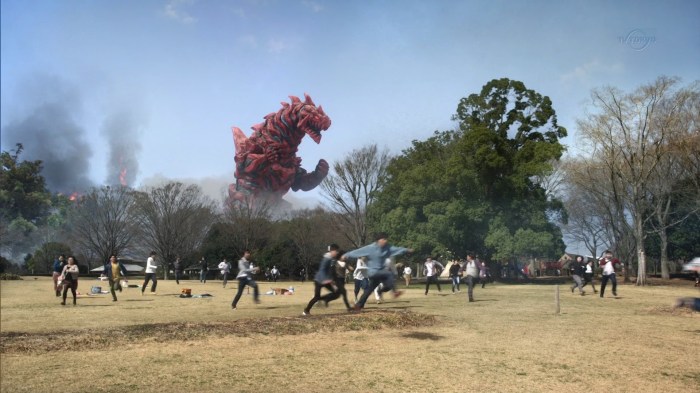 The biggest difference between this and X is that our heroes are regular guys. One of our biggest gripes with X was that the defense force that it followed, Xio, seemed focused on monster destruction with very few exceptions. Yes, it’s a kids show and the whole point is to see a giant monster blow up while Ultraman does a pose in front of the explosion, but the really good episodes were the ones that allowed us to learn a little bit about the monsters themselves. While the first episode of R/B sees the monster of the week quickly blown up, at the very least we know that it had already stomped around and set some things on fire. There was a necessity in removing the monster, rather than it being some kind of no questions asked public service like in X, and that gives me some hope that these two guys aren’t going to barrel into a fight without good reason to do so. We’ll see, I guess.

What really stood out to me in this episode was just how good the costume design is. The Ultramen themselves have always been somewhat restrained in their designs, yet they offer a great contrast with most of the monsters they fight. Lord Grigio, this week’s monster, definitely has a bit of a radioactive dinosaur vibe to it, but just look at that darn silhouette. This thing is rocking two colours and is plenty intimidating. It’s a good choice for the first monster of the new series, and knowing how Ultraman can be, I’m sure we’ll see some incarnation of it again. 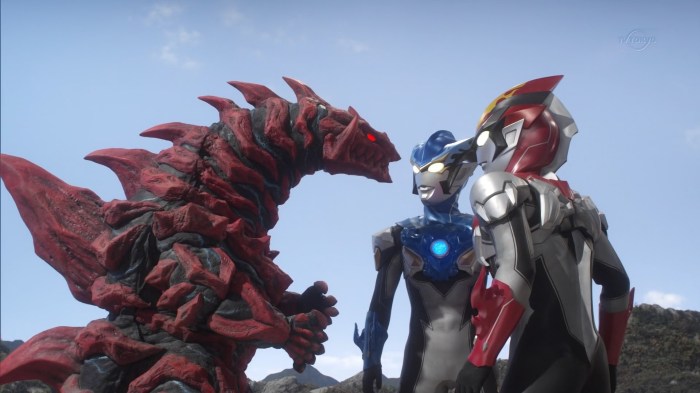 Ultraman R/B shows some promise, though I must stress that the first episode is very much a run-of-the-mill episode as far as monster fights go. If we start to see more of the plot emerging in episode two, and see the two protagonists bring more than muscle to the table, I think we’re set for an interesting series. Oh, and there was a brief mention of their mum being missing, so let’s hope that’s handled a bit better than the missing dad was in X when the plot point was remembered right at the end of the series.

Also there’s an upsetting absence of Dinosaur Tank so far. I just cant recommend this show without it.

colons’ verdict: Wait, if half of them died, how come both of them are still here?

This show’s fashion game is on point. We see a button-up shirt with ‘WE SHOULD SEEK THE GREATEST VALUE OF OUR ACTION’ written across it, a t-shirt with ‘うちゅーん’ emerging from a tiny cartoon earth, and of course, the Groudon that Euri already commented on. I hope this continues; our protagonists live and work in an independent clothing store with their clothing designer dad, who has very good taste and is basically a tokutatsu Mio Minato. As someone who owns a custom ‘Feel So Moon’ t-shirt, I have high hopes for what other ideas this aspiring designer will come up with, mostly because I want to wear them.

I object to Euri’s assertion that the Tony Stark stand-in is only ‘a bit Tony Stark-ish’. The parallel is not subtle or accidental. He is shown standing in front of an indistinguishable facsimile of the Avengers logo several times. I suppose there is the potential for confusion, though; his main product appears to be Flubber shoes that make you look poorly composited in TV ads.