Light Novel Adaptation by A-1 Pictures
Streaming on Crunchyroll

While testing a new deep dive interface, Kirito enters “Underworld”, a new virtual world that may be inspired by Alice in Wonderland. The new system provides the most realistic experience yet, but the users have no memory of the world once they wake up.

The most positive thing I can say about this double length episode is that it isn’t actively harmful. You could argue Asuna’s devoted waifu schtick is a bit much, but I don’t think it’s worth picking that fight today. I’ll even go as far as to say spending the entire first half inside the virtual world was a smart move. It’s a low bar here, but I felt more invested in this new universe than any of the other games in the series since the original.

Things unravel pretty fast once we hit the real world, and as always Sword Art Online crumbles under even the slightest scrutiny. Some examples: this new technology that writes memories directly on to your SOUL is the stupidest thing I’ve heard in a good long while, and this is coming from someone hot off watching the return of A Certain Magical Index. Then we get an equally dumb scene using a favorite trick from the SAO playbook: bring back a random, unimportant character from last series as a rabid, foaming at the mouth cartoon villain and have him jump Kirito in the street. This of course was complete with an maddeningly idiotic moment in which Kirito instinctively reaches for his sword despite this being the real world. 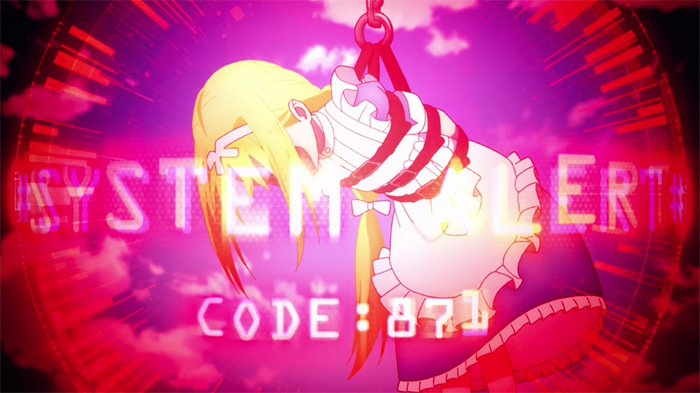 What really annoyed me watching this though was seeing just how smug the writing and directing has gotten. Sword Art Online presents itself as the deepest, most dramatic, most intelligent show ever made despite it being incredibly easy to see the seams and strings holding it together. As an example, while in the virtual world Kirito and company go a long quest to find some ice and later on, as the situation worsens, the ice is dropped on the ground. The camera lingers on it, showing it glistening and melting as a symbol of our heroes hopes or dreams or innocence or whatever. It’s the most on-the-nose shot possible, and yet I’ll bet some fans will think it’s the most profound thing they’ve ever seen.

In a bubble this episode could have been much worse and on their own the complaints I’ve made may not sound insurmountable. But in context with the series as a whole, they are clear enough warning signs to me that this is still the same old Sword Art Online and I do not want anything to do with it. We already saw hints of Kirito’s “brilliance” as well as another girl carted away for him to save which will undoubtedly play more of a role in the future. It’s only a matter of time before we’re back to status quo. For some people that may be a good thing, to which I say may god have mercy on the light rays shooting through your brain tubes. As for me, I’m out.

Zigg’s verdict: Sins of the Past

I’ll say this – this was not immediately repulsive in the way I feared it might be. It’s better than last year’s truly dire Ordinal Scale movie.  Hell, there’s even potential in the idea of a seemingly ‘perfect’ fantasy world which is in fact an oppressive dystopia. Sure, it’s not the most original story ever, but combined with the concept that it’s a lifetime you immediately forget when you’re pulled back to reality, there’s some intriguing potential for a ‘what is real’ setup. Of course, to do that you’d actually have to have some sort of skill to tell subtle, emotionally resonant stories, and I trust SAO to do that about as far as I trust an anvil to jump.

To whit, the show immediately falls back on the myriad bad habits the previous seasons cultivated. The female character is only there as a McGuffin for Kirito to chase. The writing squanders any sort of intrigue or atmosphere for laboured technobabble explanations (seriously, a machine which writes memories onto your soul?) . The pacing is atrocious, the initial fantasy sequence taking way too long, and the back half largely consisting of talking heads vomiting exposition. And, of course, there’s the same bizarre hero-worship of Kirito as some sort of touchstone for all the people around him. Dude wants to go to another country to pursue his bizarre fascination with MMOs, and Asuna just straight up says she’ll follow him anywhere, despite the fact they have all the chemistry of a dead fish. I honestly burst out laughing at him reaching for his sword, so utterly deluded and pathetic it was. I’m sure this’ll be a big hit, and honestly it may have the highest ceiling of any SAO series yet if they can execute the idea, but the damage has already been done, and nothing here convinced me they’re on a course to improve.