Young novelist Touma Kamiyama dreams of a lost past full of swordsmen and monsters, and a mysterious girl who he doesn’t recognise. While out delivering a present, he and his editor Mei are caught up in an attack from another world, and only Touma can save the day as the Swordsman of Fire, Kamen Rider Saber!

Zigg’s verdict: I Have Created Over A Thousand Clowns

I really don’t know about this guys. You’re coming off of what I was happy to declare the best Kamen Rider show in years, a smart instalment that happily balanced goofy comedy and fairly intense character drama, and one which successfully overcame production trouble to pull the franchise up by its bootstraps. And this is what you’re going to serve up as the follow-up?

I try not to be too judgemental on these first episodes because they’re inevitably highly formulaic, but this might be the worst first impression any tokusatsu production has made on me. The garish, day-glo production is reminiscent of the worst parts of Ex-Aid except even more unbearable, the constant use of colour filters and greenscreen effects to denote the ‘other world’ being almost unwatchable at times. It’s especially baffling because there’s absolutely no way the production can keep up this level – as bad as the CGI is (and it’s not great), it’s expensive and you definitely won’t be able to wallow in it like this every week.

Character-wise, even if we discount the deeply, deeply disturbing clown…thing which we open and close with, there’s not much to be optimistic about. Touma himself seems our regular genial nice guy protagonist, but the one-two punch of ‘lazy but brilliant!’ and ‘mysterious childhood waifu’ already has me worried about where they’re going with him. Mei is a character who really needs some bite to her to be effective, but Asuka Kawazu’s performance is broad as hell, all bug-eyed gaping and comedy mugging. Meanwhile, Takaya Yamaguchi as Rintaro is letting his eyebrows do a good 75% of his acting and it’s not great either. Also you can’t just call a character Kamen Rider Blades, we already have Blade and no an ‘s’ is not enough of a difference!

There are germs of interesting ideas present. I liked the monster designs, and I’m a sucker for a good ancient conspiracy, which is the direction the villains appear to be heading. A lot will depend on how they flesh out our antagonists in the short term. Still, it’s hard not to feel that after one step forward, this is Toei very confidently taking two steps back. 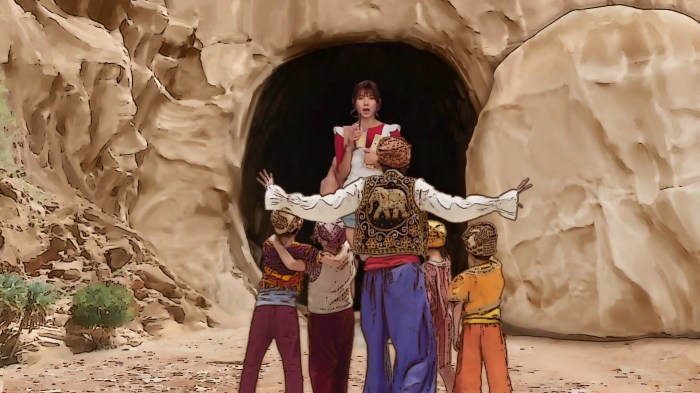 I’m pretty new to this beat, but so far I’d say the metric of how much I actually enjoy any given Kamen Rider depends on how well it’s able to juxtapose the inherent goofiness of being a toy commercial with the fundamentals of storytelling. Are the characters entertaining? Does the plot work? Would I actually care if I watched (or didn’t watch) the next episode? Maybe the overall tone is goofy (I just finished Fourze and loved it), maybe it’s serious (Gaim was the first one I saw), maybe it changes over time (Zero-One was good!), but these things still have to be kept in balance. 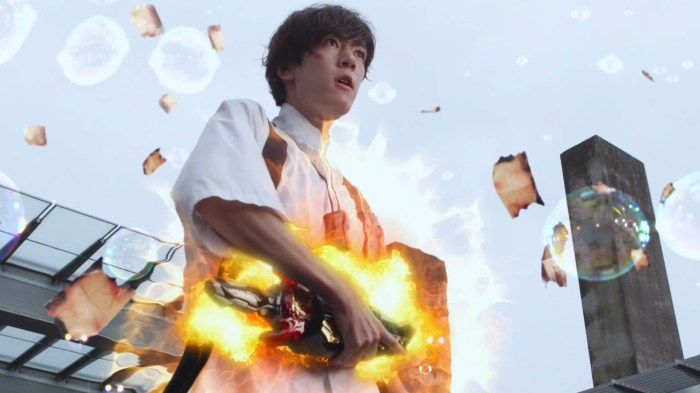 At every turn it feels like a Sentai show. It’s kiddier, sillier, less concerned with having any plot. Wacky clown man explains there are Good Guys and Bad Guys and they’ve been fighting for a long time. We can tell them apart over the course of the episode because the Good Guys are red and blue and are nice to children and have big shoulder dragon heads just like Ryusoulger. The bad guys are gray and purple and summon monsters with props for heads to attack the city for seemingly no reason other than they are Bad. There’s a dance sequence outro; I haven’t seen a single Kamen Rider that even had an outro. I watched Power Rangers as a kid, I’m watching Kiramager immediately before Kamen Rider, and it’s the same shit. Not unlike the recent Digimon Adventure reboot, it just feels like they aren’t even trying.

And look, I probably shouldn’t expect more out of a children’s show made for kids literally an ocean away; I get it. But it’s a new era, and we just came off one of the best Kamen Rider shows in years. You’d think it wouldn’t hurt to try and keep up the momentum.

Euri’s verdict: This Show Can Be Cool, I Swear

In a rare turn of events, I managed to get my brother to sit down and watch this with me. His knowledge of the Kamen Rider franchise basically consists of things he saw while out and about in Japan, a few minutes of praise I had for Zero-One, and that time a few years ago where I changed all of his browser bookmarks to various henshin sequences from Kamen Rider Gaim (Baron’s mango transformation was his favourite). I’m disappointed that this was the show I managed to get him in front of.

The first episode of a new Kamen Rider is hardly enough to judge the show by, but I don’t think I’ve said “it’s not normally like this” so much within any other twenty minute period. As has been said before me, this doesn’t feel like a Kamen Rider in almost any regard; the creepy clown intro, the giant monster of the week, the abundance of children and the dance outro all scream Super Sentai, and that’s not what I’m looking for. I’m not sure anyone is looking for that.

I’m all for trying new things, but this is only new for Kamen Rider. I’ve found it pretty difficult to get into Super Sentai shows, and if Kamen Rider Saber is going to continue with the similarities, I think I’ll be bowing out of this one early.