Recap: Mugino has cornered an exhausted Mikoto, but a mistake by Frenda may turn the tables on their showdown.

Jel’s Thoughts: Once again I’m loving the idea of an equal power level showdown, even if Mikoto’s skills are nerfed somewhat by her total exhaustion. They really want you to understand that Mugino is the Evil Mikoto. First there’s her gleefully stupid Silicon Burn attack, in which you can draw a parallel between her tossing a piece of silicon (where do you even get those?) and Mikoto’s coin. Then, for more eagle eyed viewers, did you notice she’s wearing black shorts under her dress? See, it’s the opposite of Mikoto’s white shorts! OK, maybe I was looking a little too close.

That being said the final round of their battle got dangerously close to getting really dumb, really fast. Particularly egregious was Mikoto somehow finding and stuffing a dozen or two dolls with metal while being stalked by a super powered psycho killer. I’ll forgive that for now though as this battle has been consistent in never quite giving Mikoto the upperhand, no matter what trump card she’s holding. I was most worried when Mugino spouted the face palm inducing villain line to the effect of “SINCE YOU’RE GOING TO DIE, WHY DON’T YOU SHOOT YOUR MOST POWERFUL ATTACK AT ME?”, which thankfully was diffused by Mikoto’s lack of power. It’s a sign the fight was starting to overstay its welcome and we needed to move on, and thankfully that’s exactly what they did. 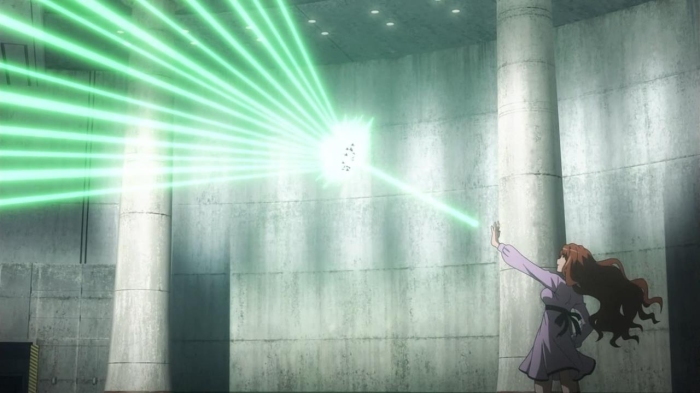 Moving along, it looks like we’re going to get a needed breather from the action as Mikoto thinks she’s achieved her goal. The final shot with Touma at the vending machine was a cool way to tie back in to Index. We knew he would have to be involved eventually to end this thing, but I do wonder how much of his part of the story they’re going to cover. It would kind of feel wrong to actually show him defeat Accelerator when Mikoto has been doing all the hard work up to this point, but it wouldn’t feel right to just cut it out of the story either. Maybe she’ll go smash up the remaining research facility, or whatever remaining data is out there? I guess we’ll see soon enough.

Zigg’s Thoughts: Another decent episode, one blessed with good action, strong animation and a pretty decent plot thread. Now we’re reduced to a one-on-one fight and Mugino can’t simply blast through the walls the choreography becomes much more exciting and dynamic and I was genuinely engaged by the back and forth battle. That said, if there’s an issue with the fight it’s plausibility. Jel has already noted how silly it is to imagine Mikoto had time to gather all of those dolls, so I’m instead going to nitpick about the nature of her powers. One thing which has disappointed me in this arc is that increasingly Mikoto is just becoming Magneto and using crazy magnetism powers. I get that she’s meant to be super skilled in manipulating her abilities and yes, being a huge living battery would give you limited control over electromagnetism (her using that to fly through the air and attach to objects is much more realistic use of such power). But the flying dolls just smack of a cheap way to give her psychokinesis and push my suspension of disbelief a little far. 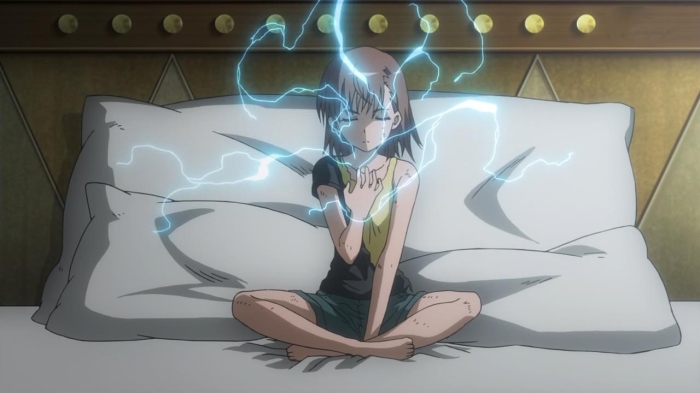 Having said that, I do really like that Mugino’s awesome scattering effect shot and the way she achieves it, and it’s a neat touch that the fight ends with a deliberately underwhelming knockout after all the bombast that went before. The back half of the episode is great too, with the weakened, helpless Mikoto effectively hunted and ultimately using brain instead of brawn to live to fight another day. Her analysis of possible escape routes is a really nice few seconds that demonstrate the smarts of the character, and her attempting to save Mugino from the fall is also a strong character moment. Mugino surviving on her own with nary a broken bone is a bit suspect but probably the best possible outcome – Mikoto gets to look compassionate without the inevitable stupid aftermath and Mugino survives but still lets her prey escape.

My one major issue with the ending is that Mikoto actually seems to believe the company she has been chasing (who she KNOWS is in deep in conspiracy theory crap) has actually shut down, and taking the paper at face value. Even if the show is going for the deliberately naive girl path, it’s just a little too straight up for me to swallow. Having said that, i think the rest of the ending is really strong, and i especially like the brief scene in the hotel room, a very effective ‘back to reality’ moment. It’s a mark of how strongly these episodes have left an impression that it took me a minute or so to adjust to schoolgirl Mikoto again. Having Touma at the end to replicate the scene in Index is a great little tease as well. It’ll be interesting to see how they balance telling the story from Index with still wrapping up ITEM and keeping the focus on Mikoto.