Recap: Accelerator is defeated as Mikoto stands her ground defending 10032. With the Level 6 Project cancelled, she tries to sort out her relationship with her new sisters as well as her feelings for Touma.

Jel’s Thoughts: For all the mild complaining we’ve done about Railgun S retreading ground covered in Index, it’s only fair to give them credit when they make the story their own. That’s what we got as the Sisters arc came to a close, and aside from another pointless attempt at developing Accelerator’s character this was a great way to end the story. We really did get to see things from Mikoto’s perspective, whether it was her unflappable courage in standing up to Accelerator or the humorous look into the mind of a top tier tsundere. Even though Touma did the dirty work in the end, they did a really good job of keeping him from hijacking the series and making it clear this was still her story. 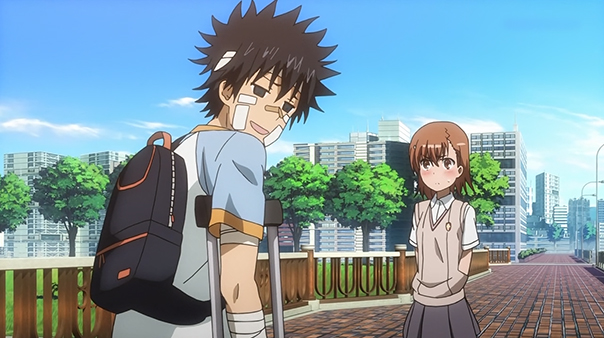 The best new moment though was Mikoto and 10032 meeting the little girls in the park. In fact, I will even go as far as to say 10032 explaining the meaning of Big Sisterhood to the girls was arguably my favorite moment in the entire series. I can’t think of another time this big, dumb, silly franchise packed that much of an emotional punch on me. Between that, a perfectly timed appearance of Saten and Uiharu, and the adorable interactions between Mikoto and Touma, the back half of the episode was a really sweet and well deserved epilogue to a fantastic re-telling of this story.

FINAL IMPRES… oh wait, there’s more? With the “story” of Railgun S wrapped up, here is where things are going to get tricky. As I’ve mentioned before, the director has explicitly stated the show will return to “light atmosphere” and “plenty of fan service” once the Sisters arc has ended. The anime original filler in the first series was by far its weakest aspect, so the prospect of an original Summer vacation arc does not sound promising. I’ll admit we deserve a break after such a long string of heavy episodes, but going all out beaches/pools and bikinis after the series has stayed pretty devoid of fan service just doesn’t feel right. To be fair, they have done a really good job up to this point as far as directing and presentation, which is much more critical if you’re going to go into Slice of Life mode. So maybe they’ll manage to put together something funny and charming without too much Kuroko in a string bikini? We can only hope.

Zigg’s Thoughts: It’s episodes like these where the really good shows rise to the occasion, and Railgun absolutely did that here. Sure, more Accelerator backstory and justification is tedious and largely unnecessary, as we’ve gone over before, but I think even the ‘fight’ portion of this episode has much to recommend it. Misaka’s final decision to stand by her sister is heartwarming and I’ll never ever get tired of seeing Touma pull himself up and punch people in the face. You really got the ‘heroic comeback’ vibe they were going for here, something it’s all too easy to screw up.

It’s after that’s all over that this episode really earns its stripes though. Pretty much everything post knockout is absolute gold, a succession of scenes that are sad, hopeful, funny and frustrating, really reminding you why you became invested in this world. It’s a great demonstration of how you can draw out the emotion in your audience and in doing so create a sense of attachment and affection for the show more comprehensively than a thousand flashy fight scenes could. Mikoto and 10032’s conversation in the park is perhaps the best scene of the year so far, a mini-masterpiece of dialogue writing that knows just when to say something and just when to stand still. The goofy comedy is great, but crucially it complements rather than clashes with the emotional undercurrent of the scene. 10032’s burgeoning independence is delightful, but it’s tied with her uncertainty about the future, and the attachment she feels towards Mikoto. who reciprocates. Using the kids is a little cheap sure, but it pushes all the right buttons. I’d have probably placed this scene at the end – that fade to white is just too perfect.

As it is, Mikoto’s encounter with Touma on the bridge is far less original or moving, but so wonderfully well written and acted (great, GREAT voice acting from everyone in this episode by the way) that it’s a joy to sit through anyway. As cliched as it might be when it’s done well the embarrassed tsundere schtick is still utterly adorable and very funny to boot. Touma and Mikoto make hay with the most basic of scenarios here and though the ending is a cop-out, it’s a knowing one that’s funny and plants fertile seeds for the future. I really like the fact that we don’t get to see Mikoto’s face, leaving up to your imagination where it’ll undoubtedly be far funnier/cuter than it could possibly be on screen. It’s a good way to have Kuroko, Uiharu and Saten re-appear as well, and their presence, combined with the light-hearted tone of this final scene, makes it feel as if we’re gently easing back into ‘normal’ life after the high drama of this arc, a nice atmosphere to end on. 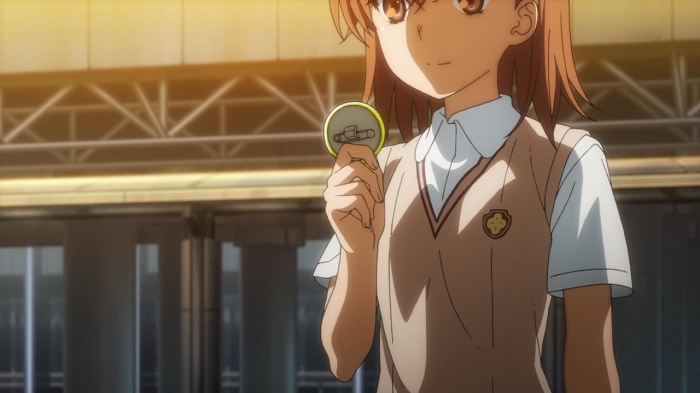 Really, I can’t say enough good things about this episode. It made me happy for the characters, it made me worried for them, it made me feel for them. That’s about all you can ask for from any type of media. It’ll be interesting to see how Railgun handles its remaining non-manga filler, considering that’s where the first season sort of went off of the rails, but in my eyes they have a long, long leash now. And dare I say it, after all that drama I’d be OK with a few beach/shopping/school episodes.  These girls have earned it.