Recap: Haruka starts questioning his motives for swimming, while Makoto, Nagisa and Rei try to compensate for his unexpected loss. With Iwatobi’s shot at the finals ruined, Gou offers the boys a surprising second chance.

You could have fooled me, Kyoto Animation. For a brief while there, I thought you would actually have the gall to make your main characters honestly and irreversibly I and sneak a bit of pragmatism in your ever-happy world of cake and rainbows. Then, however, Gou revealed that the boys have one more chance at making it to the finals and the rest is as predictable as the outcome of a cage fight between Bruce Lee and an office clerk. Nevertheless, an overall losing streak does bring some common sense to Iwatobi’s table, as Haruka realizes that his reason for swimming may not be as clean-cut as he originally thought. Even Rin starts to question his ideals, which serves as a nice buildup to the two meeting each other halfway.

In the end, many of the themes explored in this episode serve as a nice continuation of last week’s. Free! does drama pretty well, and in its undying optimism, the friendship between the swimbros becomes immediately credible. Despite Free!‘s rather cookie-cutter plot progression, Kyoto Animation’s storytelling prowess really does show off on multiple levels. It is a simple story well told, and one that uses animation and sound quirks to support the story, rather than the two existing on completely separate levels. Haruka’s fake tears, as seen in the header image, show this off nicely, but the finest example of this must be Rei’s constant gasping for air while swimming, a wonderful way of showing that he is inexperienced, rather than telling. Rin eventually does bring it up, in a rather narmy realization, but it certainly makes for a nice detail. 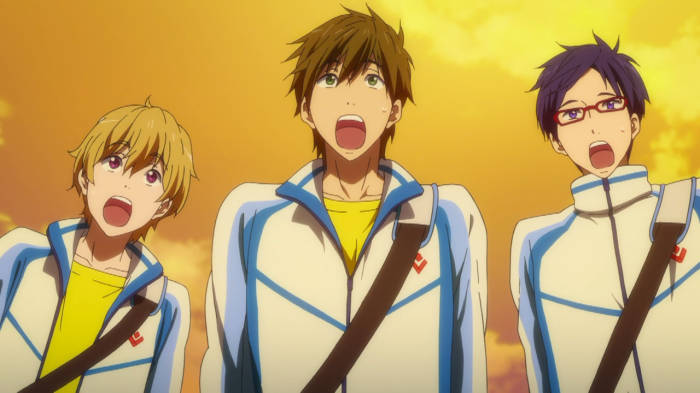 I could fit an apple in those mouths.

It is fairly obvious that our team will manage to win the relay, or at least qualify for the next tournament, in which Haruka and Rin will be able to face off once again. While I am interested to see how Haruka’s development will carry on, I hope the other swimbros will not get sidetracked as a result. With aiding him in getting another chance at racing against Rin, they seem to have fulfilled their purpose in the story. Haruka might be the main character, but I like Nagisa, Makoto and Rei too much to see them reduced to a cheering squad.