Hit the “Random” button and see what comes up! In this feature, we take a look at whatever manga the RNG decides to throw at us and find out if it’s worth your time. This week, we have another guest post from MarlinClock!

This time: Miyori no Mori, by Hideji Oda

The Basics: Miyori is a young girl whose family has recently torn itself apart. Left in the care of her grandparents, Miyori is dramatic and quick tempered, spurring the care of those around her. As she starts to explore the forest surrounding her new home, she slowly changes, adapting to her new way of life. She starts to see spirits, and is told that she is really the next heir to become Guardian of the Forest.

I was really enjoying this out of the bat. Miyori is a very angsty preteen, but she is probably the most justifiably angsty preteen in quite some time. Her mother has run away for her own tutor, and her father decides to abandon her to her grandparents instead of raising her himself. The beginning of the manga chronicles her fits of emotion as she comes to terms with her new life. She quickly finds out she can see strange spirits in the forest. They tell her she will be the next guardian, the one who will protect all living things in the forest from human corruption. In this way, Miyori seems to bifurcate itself into two different stories. One is Miyori waking up to her love of nature. In it, she finds how the forest has recently come into danger of development. She and her newfound friends and classmates start a mad search for endangered species that would give the area official protection status(not that that ever helped Yosemite). In the other,, there is a bit of a coming of age story, as Miyori gets a first hand look into the ugliness of adult relationships. Through her interactions with her mother and the spirit of a jilted lover who took her life in the forest, she commits herself to not let her become someone so easily swayed by emotions. In the end, both plots somehow merge in this surreal scene as Miyori is kidnapped by her mother’s lover and is saved by her spirit friends from the forest. 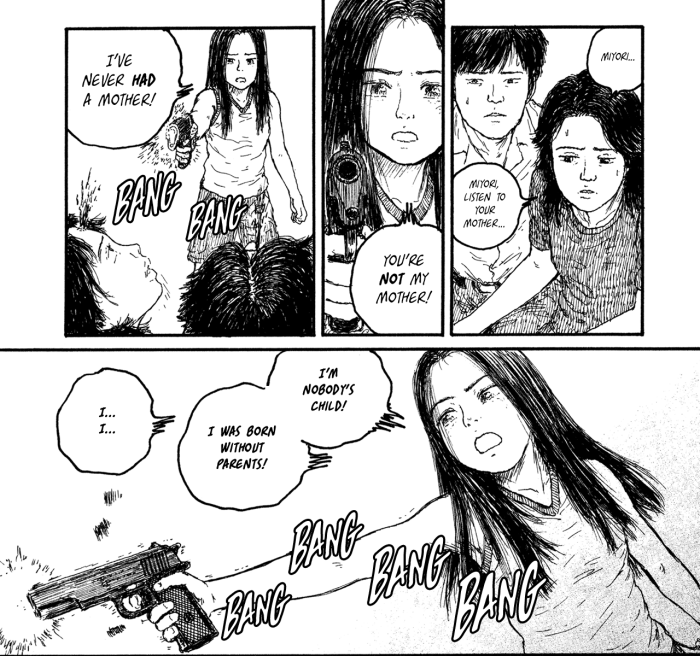 At 200 pages, Miyori’s Forest is not a very long story. It would have benefited from a bit more development. It’s hard to tell, but I wonder if this was axed before the author intended it to. The plot development in the last few chapters happens very rapidly and things spiral out of control out of nowhere. It also becomes a bit too preachy at times, as it drills its environmentalist message very bluntly. Don’t get me wrong, my very employment relies upon environmentalism, but it’s a bit disingenuous that the plan in this story involves deceiving people in order to protect the forest. Still, it’s not a bad manga, and while some of the parts could need some fine-tuning, its short length means you’d only need about an hour or so to go through the whole thing.