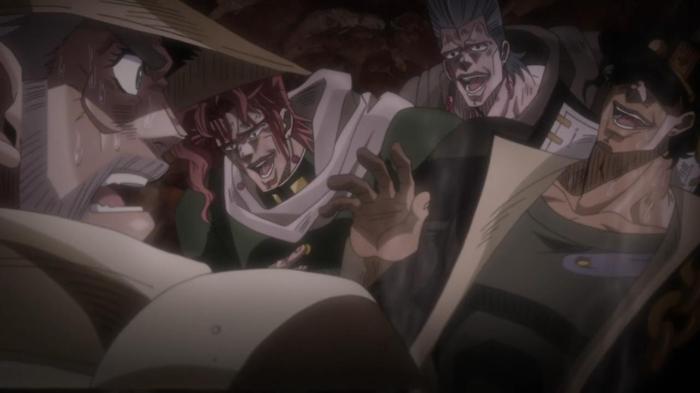 As our heroes cross the desert, they’re attacked by The Sun Stand.

Seeing as how the upcoming Death 13 arc is slated to be a two-parter, I’m breaking our cushy fortnightly JoJo post pattern as to keep those episodes together. Which ends up as a bit of a problem for this week, because the Sun barely has enough content for half a post, let alone an entire post. Just for reference, I went back to check, and the Sun took two chapters in the manga. Our heroes try to cross the desert, get ambushed by a guy with a big fireball for a Stand, and then beat him with hardly any fanfare at all. It’s dumb and silly, and while we usually like our JoJo to be just that, it was still a little egregious.

On the bright side, at least 75% of the episode involves good ol’ Joseph being a complete spaz, as per usual. I still don’t think I’ll ever get tired of him randomly shouting English curse words, or just being an idiot in general. The call back to his bad luck with planes is still one of my favorite jokes in Stardust Crusaders (Jotaro you don’t get to complain until you crash an immortal god into an active volcano), and the comedy bit with camels is plain ridiculous.

Anyway, the Death 13 arc is coming up, and it should be a return to a slightly more serious Stand battle. It’s also one of the few arcs I actually remember from reading the manga from way back, so that’s something. 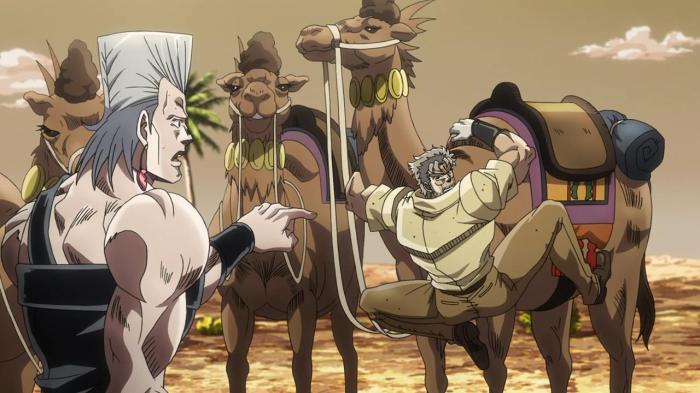