Kanbaru begins her senior year trying to find herself now that Araragi and Senjougahara have graduated. She investigates rumors surrounding a mysterious “Devil Lord” and encounters some faces from her past.

I’m torn on my opinion of the Monogatari second season’s final arc. On the one hand it’s arguably the series’ best single story to date. Kanbaru’s role as Araragi’s best bro has always made her perspective a bit different than the other girls, and seeing as she is not totally driven by trying to get in his pants her motivations work well for a stand alone arc. Newcomer Numachi plays a perfect antagonistic foil as, much like Kaiki Deishu, her intentions are morally ambiguous and never quite clear. Kaiki’s surprise appearance as well as an extended cameo from the now “old” and wise Araragi (who looks more and more like a full on vampire) help round out the last leg of Kanbaru’s journey from lost and confused girl to proud and confident woman. 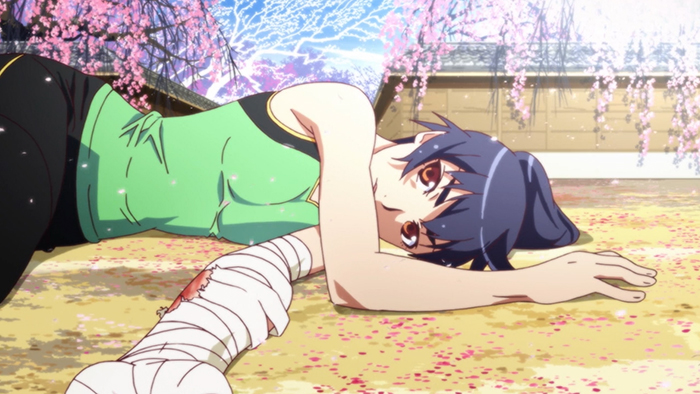 Unfortunately, the experience of actually sitting down and watching Hanamonogatari feels extremely heavy and joyless. The two most common criticisms of the Monogatari series are the gratuitous sexuality and the lengthy, overwhelming amounts of dialogue. Hanamonogatari is amazingly tame in terms of fan service, but is hit pretty hard by the second issue. Author Nisioisin empties his philosophical tank, jumping around to all kinds of life lessons like the value of helping other people and being true to yourself – all told with his oddly specific reverse logic that seems brilliant in small doses but becomes tiresome after 5 straight episodes of solid talking. I didn’t time it, but I’d bet there was only one episode worth of actual animation as the bulk of the episodes are simply Kanbaru and Numachi talking in the school gymnasium. Between the lack of action and a conspicuous lack of the show’s self aware sense of humor, the episodes become exhausting to watch.

It’s really just another glaring example of how difficult it has been translating the Monogatari series from novel to anime. I’d love to offer some better solutions than just having the characters sit down and talk, but it’s not that simple. So much of the series strength comes from exactly how the words are are written and not just what’s being said that I can understand why it’s so hard to trim down. Notorious director Akiyuki Shinbo does his best to keep things visually interesting with some of his best work in the series. Keeping his usual lasciviousness in check, Hanamonogatari is laced with surreal visual non-sequiturs like random Tetris blocks in the school courtyard or a thin pool of water lining the basketball court during a critical game of one on one. Subtle moments like an exhausted Kanbaru and Numachi sprawled on the court and pushing a ball between them as they continue to do verbal battle help ease the pain, but ultimately there’s only so much you can do to keep your eyes stimulated while trying to process massive amounts of complex dialogue.

Of course after nearly 60 episodes of Monogatari, I realize nothing I can say is going to change whether you watch this or not. If you’ve made it this far you’re probably like me and find the story and characters too fascinating to ignore despite the shortcomings of the adaptation. As a result, I have zero regret from watching Hanamonogatari. It served its purpose in telling an important part of the story, gave us a few great key moments, and has left us plenty of unanswered questions like why is Kaiki alive and just who/what is Ougi Oshino? That said, I would never want to watch it again nor would I point to Hanamonogatari as a standout example of why people should watch the series. Instead, we can all just go back to our speculating and wait on the announcement of season 3.