Hoping to live a “normal” school life, Yuuji Kazami transfers to a school with only 5 other students, all of them female. They are all weird and probably have some kind of dark secrets. Other than that, I have no idea what is going on.

This episode was a mess of ideas, most of which were lame visual novel tropes and shameless pandering to the audience. The tone wildly swings around from silly to serious, using exaggerated cartoonish animation one scene before taking a more dramatic turn the next. I suppose there’s something to be said about equal opportunity fan service as the main character walks around naked for several minutes before launching into a cavalcade of panty shots from the female cast, but that is not much of a positive feature when it’s so in your face. 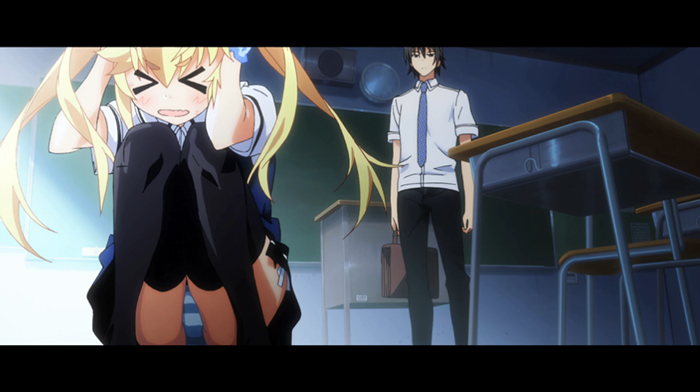 The presentation would be forgivable if the characters or story had some appeal but there’s just not much to work with here. I am going to punch my screen the next time I see an emotionless male protagonist who just wants to lead a “normal” life. Throw in a maid, a self aware tsundere, a random loli, and a naked girl and they pretty much have the bases covered. All of them are annoyingly predictable, except for the “big sister” who had the dumbest excuse to get naked of all time. Rather than draw me in, I wanted to shut off my computer and go read a book or something.

The only hope lies in the plot itself as clearly there is some kind of sinister purpose for the school. They certainly went in hard with the “Forbidden Fruit” visual. The sight of guns and bombs toward the end couldn’t help but draw comparisons to the recent school girl Battle Royale  The Devil’s Riddle, but that is not good company to keep. I wish I could say I saw some potential, but there is very little information provided in this episode and very little incentive to continue watching. Maybe there is a story to tell here, but if this is an indication of how the rest of the adaptation is going to go then I want no part of it.

Marlin’s verdict: For the love of God, and all that is holy, do not watch this.

This show was terrible in almost every conceivable fashion. Gratuitous, lifeless, unentertaining, there’s a lot not to like about Grisaia. When the inappropriateness of your panty shots makes Hyakka Ryouran seem measured in comparison, you’re doing something wrong. Terribly wrong. Besides even that, all the characters are the worst types of two dimensional fetish bait. Nothing about this show is either endearing or interesting. Even the end, which shows previously harmless characters wielding knives and building pipe bombs, fails to elicit any kind of reaction because the show had spent all time prior to that wasting any shred of good will it could possible have had to begin with.

11 thoughts on “First Look: The Fruit of Grisaia”