Colons’ verdict: This show is a revolution in anime storytelling. I’ve never seen anything like it.

So get this, you guys, there’s this brown-haired dude with, like, this super dark thing in his past that motivates him where some woman he knew died in his arms in black and white. And he’s starting at this school. But it’s not, like, an ordinary school; it’s a school where they teach fighting to kids with special powers that let them summon weapons! And in the entrance exam they have to fight another student, and only the winners make it into the school (so cool)!

Anyway, the dude wins against this girl because he’s got this sick shield and he can dragon punch! It’s super cool. And she’s cool about it, too; she even says some motivational stuff and demonstrates how real-life boobs must jiggle when real-life women move before leaving. Which is weird, because she seemed pretty determined to join at first, and she also had some dark past stuff going on. Oh well, I guess we’ll never see her again.

So later, he’s sat in the back left of the classroom by the windows, next to this mysterious white-haired girl he saw briefly on the way into school. She’s super shy and adorable and there’s this hilarious bit where she stares at him but when he looks at her she quickly looks away. It was funny the first time, and somehow it only got funnier by the fifth; I think they could have carried that goof for a good ten minutes but I guess they had important storytelling to do so they couldn’t fully explore it. Shame, really.

Then their homeroom teacher shows up and she’s dressed up in this, like, bunny maid outfit. Super kooky, right? Anyway, she pairs up the class so that the awesome dude (who is totally relatable) gets paired with the mysterious girl! She’s like German or something; you can tell because she keeps saying ‘ja’ and stuff all the time, even though she otherwise speaks with a perfect Japanese accent. And basically they’re gonna live together for the next week because this Duo idea is important, for reasons they totally explained in a really natural way. 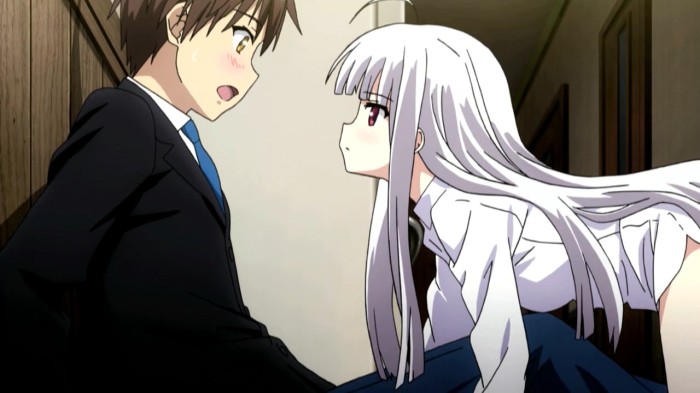 There’s this great bit where the dude is stood outside their shared dorm room and rehearses his entrance a few times and then when he walks in she’s not even there! Ha ha ha. But then she comes out of the bathroom and is dressed in like this hot skimpy shirt and nothing else and the dude is totally smooth and they talk for a bit. She wants to learn how to do his sweet dragon punch but it gave him like a dead arm when he did it earlier so he responsibly points out that if a girl were to try it she would be totally killed. He’s so thoughtful! Then she falls asleep on him and he carries her to bed and tucks her in and oh my god she’s so adorable.

Man, I’m super excited for the next episode too; there was a bit in the preview where the dude had his face really close to some girl’s crotch for what I am sure are totally reasonable reasons, and I’m super excited to see how that goes down. Gonna be hilarious, I bet. 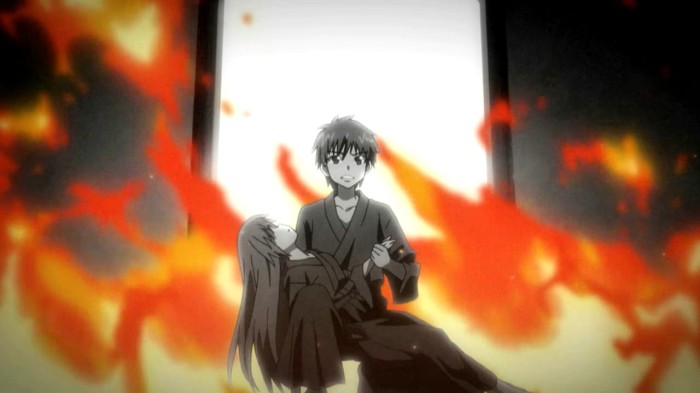 Oh man, this show was so hot. Like, all the girls with the skintight uniforms was great. The teacher has to be the hottest, I would buy that playboy any day of the week. Also she is cute and funny with her jokes and it didn’t even bother me that she was just spouting a bunch of expositional nonsense because her boobs were amazzzing. Still man, that heroine is the icing on the cake. She’s cute and had the best joke, she obviously wants the MC but she’s too shy, kawaii~. And then he gets to live with her? Talk about a dream come true. Like, who wouldn’t want to get with a cute scandinavian loli, is this MC gay?

This show makes me want to get super awesome powers and fight, I’d totally get a bunch of babes. My blaze would be a sword that also turns into a gun. When I show my skillz in the opening ceremony I’d act all cool, like it ain’t no thang. Then everyone would want to be my duo. Once it came down to the selection, obviously you’d think I’d land the heroine right? I mean I’m amazing and she’s smokin’. But no, even better, I would be so irregular that my duo would have all three of the main girls in it. The heroine’s great, but I need some boobage, that’s just common sense. Of course, all of them would want in my pants. I mean who wouldn’t, my abilities in battle would be nothing compared to my sexual prowess in bed. This is the kind of revolutionary idea that would make Absoulte Duo great. I should find the author.